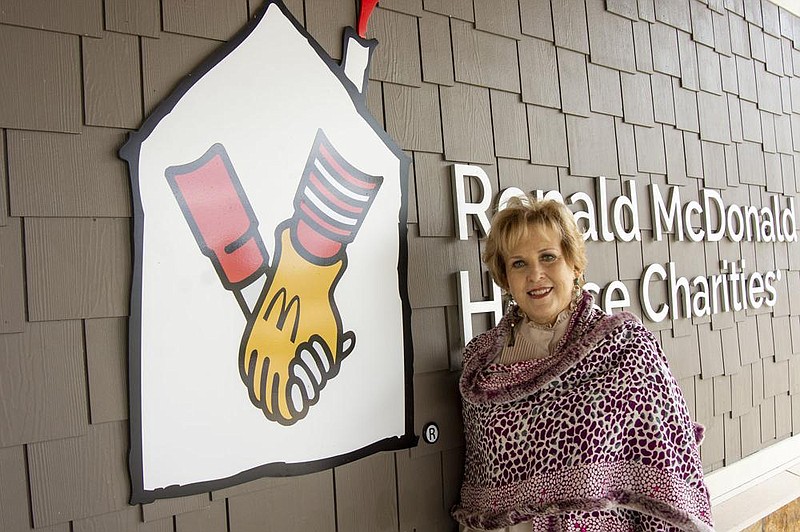 Donna Clark, a member of the board of directors of Ronald McDonald House Charities Arkansas in Little Rock and the chairwoman of its development committee, says the organization serves as “a home away from home when families have seriously ill children.” (Arkansas Democrat-Gazette/Cary Jenkins) ( Cary Jenkins / Cary Jenkins)

It's a cloudy, cool Thursday afternoon in October and the dining area at the Ronald McDonald House in Little Rock is mostly empty.

This is the space where families of children receiving care at area hospitals can eat during their stay at Ronald McDonald House. There are stoves and spacious granite countertops where volunteers prepare and serve meals.

Along with the dining space, the nonprofit Ronald McDonald House has 32 suites, a large kitchen and recreation areas for families and children in its 32,000-square-foot location near Arkansas Children's Hospital.

Donna Clark is seated at one of the tables in the spacious dining area.

Clark, owner of DD Stables LLC and a native of Paris, Texas, is a member of the board of directors of Ronald McDonald House Charities Arkansas and the chairwoman of its development committee.

Clark, 72, and her late husband, David M. Clark, who owned an air cargo business and died in 2015, were among the first to contribute to construction of the building at the current location, which opened in 2016 and replaced the original Ronald McDonald House that began with eight bedrooms in 1981 and eventually expanded to 28.

"We are a home away from home when families have seriously ill children and need to be close to them," she says. "Family helps in the healing process. The closer the family is to a sick child, the better their chance for recovery."

She first became involved with the Ronald McDonald House through the Clark Family Foundation, which was created by David and was dedicated to supporting children's health and well-being (in 2016, the foundation donated $2.5 million to Arkansas Children's Hospital to establish The David M. Clark Center for Safe and Healthy Children. The basketball court at Ronald McDonald House is also named for David Clark).

"To me, Arkansas Children's Hospital and the Ronald McDonald House have always gone hand in hand," Clark says. "As much as [David] was involved at the hospital, I became involved here."

This is Clark's third year on the board and for the past two years has headed the development committee.

The latter, she says, "is fundraising, which is a biggie."

Janell Mason is executive director at Ronald McDonald House and has known Clark for six years.

"Donna is a straight shooter," she says in an email. "She has a heart as big as Texas and is ready to take the lead. I love her for that. She also has a cadre of some of the best girlfriends you'll ever meet, who have also become involved with Ronald McDonald House thanks to her."

Emily Piechocki is development director at Ronald McDonald House and has worked closely with Clark.

"I could tell right away that she is an idea person and someone who puts her whole heart in projects," Piechocki says in an email about her first meeting with Clark. "When you need a new concept or idea, she's the person to call."

It was Clark who implemented the bi-weekly Red Carpet event on the fifth floor at Ronald McDonald House.

"Well, it was a stolen idea," she admits. "Friends of mine, five or six of us, collected new or gently worn clothing for the ladies [staying at Ronald McDonald House]."

It gives the women at the house a chance to get new clothes and necessities if they are away from home for long stretches but also, Clark says, "if they just want to do something while they are here that feels normal, like going shopping, but they don't have to leave and go find a store."

Clark was also behind the re-branding of a yearly fundraising party to A Night in Vegas.

"She rallied her wonderful friends, and they went to work figuring out the menu, décor and the entire experience," Piechocki says. "The event was met with much praise and it tripled the fundraising of the previous event in the first year."

The first Night in Vegas was held last year on the Sunday night before the annual Ronald McDonald House Charities Arkansas Golf Scramble.

"We had to rent casino tables, but we had donated food and beverages. It was an enormous success, especially for its first year," Clark says.

This year's event was canceled because of the pandemic, but the golf scramble did tee off on Sept. 28.

As of now, the annual Chocolate Fantasy Ball, which is held in February and raises about $750,000, is still a question mark on the fundraising calendar.

"That's the looming question at this point," says Clark, who was honored at the 2020 event. "It's the big fundraiser that we depend on. If we can't do that, then what are we going to do?"

The pandemic "has been a challenge without in-person meetings and events," Piechocki says. "It is so important to keep families close by giving them a place to stay and food to eat while their child is hospitalized. The biggest challenge has been letting people know that all donations make a difference, big or small. For instance, just $10 a month provides an overnight stay for a family when they need it most."

Clark's enthusiasm and creativity, especially in times like these, are valued at Ronald McDonald House, Mason says.

"When Donna Clark starts a sentence with 'I've been thinking ...' I know something great is going to happen."

Clark is just as much a fan of Mason's and says that Mason and the staff are big factors in why she is involved with Ronald McDonald House.

"Janell makes me feel like I really have something to offer besides my checkbook," Clark says "That motivates you to try more, do more, think more.

"Everybody is always enthusiastic and supportive. We have a great board ... You don't feel like you're rolling a marble uphill with your nose. And just knowing all the good that is done here, that makes it all worth it."