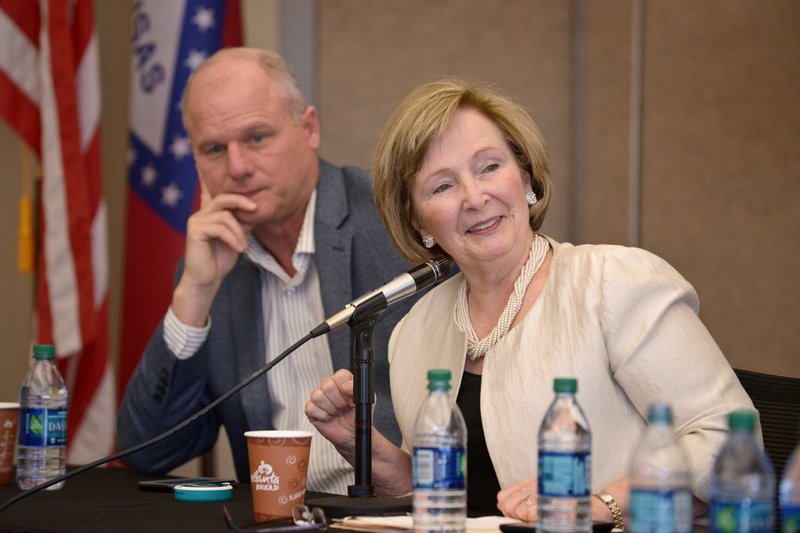 Sen. Cecile Bledsoe, R-Rogers, is the seventh state lawmaker to test positive for the coronavirus during the past several days.

Bledsoe is a former chairwoman of the Senate Public Health, Welfare and Labor Committee, whose husband James Bledsoe is a chief physician specialist at the state Department of Health and whose son Greg Bledsoe is the state’s surgeon general. She could not be reached for comment by telephone on Monday.

Late Monday afternoon, Greg Bledsoe tweeted, "Quick update on my family: My parents, wife and two of three children have tested positive positive for #COVID19 in spite of our best attempts to distance & wear masks.

"I have had three PCR tests this week & remain negative," he said in his tweet. "So far, everyone is doing ok."

Greg Bledsoe said it appears the covid-19 cases in his immediate family are not connected to his parents and just a coincidence.

"It also appears to have nothing to do with my clinical work. I have cared for dozens of #COVID patients and remain negative & asymptomatic," he said in his tweet. "I have had no contact this week with other members of the AR General Assembly, so our cases also appear unrelated to the recent cases at the Capitol. All of this underscores the importance of the public remaining vigilant regarding masks & distancing."

The council’s other co-chairman Rep. Jeff Wardlaw, R-Hermitage, said he is in quarantine because his wife tested positive for coronavirus Monday morning.

Wardlaw said he expects to receive the results of his test for the coronavirus on Wednesday.

He noted that Bledsoe “wasn’t at the [budget] hearings last week.”

Rep. Charlene Fite, R-Van Buren, announced on Saturday that she has tested positive for coronavirus.

Lawmakers are scheduled to resume their budget hearings for state agencies on Tuesday morning.

The lawmakers started budget hearings on Oct. 13 and the hearings are slate to end on Nov. 12. On Nov. 10, Gov. Asa Hutchinson is scheduled to present his proposed budget for fiscal year 2022 that starts July 1, 2021

Hutchinson last week limited his public appearances and meetings after being exposed to someone with the virus. Since the exposure, he has tested negative several times for the virus. A schedule released Monday showed Hutchinson planned a news conference about Pinnacle Mountain at Two Rivers Park in Little Rock on Wednesday.

As of Monday afternoon, Arkansas has had 106,727 probable and confirmed coronavirus cases and 1,833 people have died from covid-19 since the pandemic began.

Information for this article was contributed by the Associated Press.

This story was originally published at 12:11 p.m.

CORRECTION: A previous version of this story misstated one of Cecile Bledsoe's positions. She co-chairs the Legislative Council.