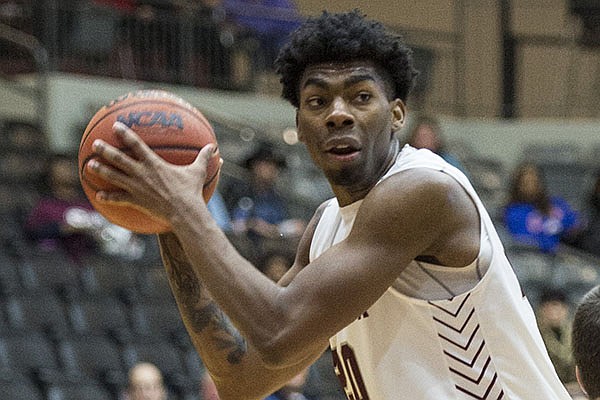 UALR forward Kamani Johnson (20) looks for a teammate to pass to during a game against Texas-Arlington on Saturday, Jan. 4, 2020, at Jack Stephens Center in Little Rock. ( Jeff Gammons)

Johnson, a 6-7, 215-pound junior, chose the Razorbacks over St. John’s, DePaul and others. He's expected to join the program in mid-December and will become eligible for the 2021-22 season.

“Kamani comes from a winning program and he has been well coached in a really good system by Darrell Walker,” Musselman said. “He plays extremely hard and is one of the best free throw attempt players in the country. Kamani’s rebounding ability will be an asset and he will fit into our philosophy of trying to get to the free throw line.”

A Brooklyn native, Johnson played in 27 games with 15 starts as a true freshman for the Trojans and averaged 5.1 points and 4.8 rebounds in 19.2 minutes per game. He shot 55.2 percent from the floor.

He was a third-team All-Sun Belt Conference selection as a sophomore after averaging 11 points, 6.7 rebounds and 2.2 assists per game. He started 28 of 31 games and shot 51.3 percent from the floor and 72.7 percent from the free throw line.

His 144 made free throws rank sixth in program history for a single season. He had five double-doubles last season and had career highs of 32 points and 16 rebounds in a victory at Arkansas State.

Johnson had 13 points and 11 rebounds in a 79-64 exhibition loss at Arkansas. He also had three assists and one steal.