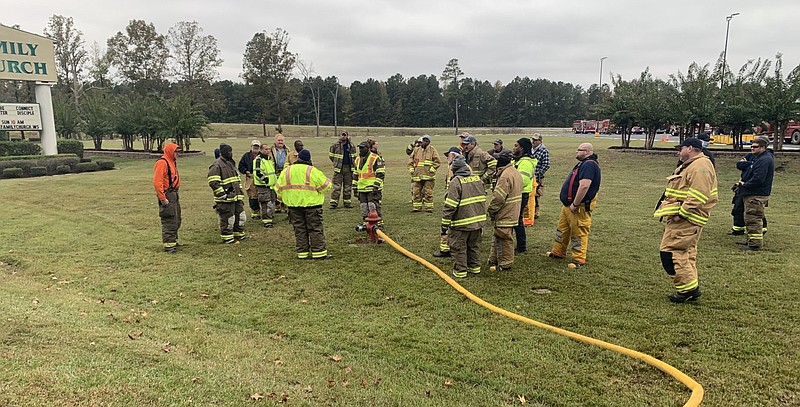 From Interstate 530 at White Hall, it looked as if the Family Church was in trouble as about a dozen Jefferson County fire truck tankers gathered in the church's parking lot.

The dump tank is used to hold water so the tanker can immediately return to the fill site. The firefighters use the dump tank as a water source when fighting a fire in a rural area or in a place where there are no hydrants, said Danny Akines, Redfield Volunteer Fire Department chief.

Despite the chilly weather, more than 35 firefighters gathered Saturday for the training.

"We worked on moving lots of water," Akines explained near the event's end.

A tanker holds about 2,000 gallons when full and it takes about 90 seconds to dump the water.

"Time is critical in an emergency situation," Akines said.

So this was an opportunity for Jefferson County professional and volunteer firefighters to get some practical hands-on experience, Akines said.

The training was approved by the Arkansas Fire Training Academy and was a follow-up to an in-classroom training session the week before.

Each station brought its own tanker to White Hall. These were lined up so that each department could explain and show off their equipment.

"They'll be able to see what the other departments have," said Eddie Anderson, Jefferson County Mutual Aid Association president.

He also works as a full-time firefighter in Central Arkansas and is chief at the Altheimer Volunteer Fire Department.

There can be problems as different fire departments come together as a team in an emergency, so, Anderson said, "If one of our departments has a major fire, we need to know how to shuffle water and offer support."

As well, he has a better understanding of what equipment the other departments have in case it's ever needed by his department.

Willie Williams, a firefighter with the Tucker Volunteer Fire Department, said the event "was good practice."

Ed Engstrom Tucker Volunteer Fire Department chief, said he was pleased with the spot they selected for the Field Day.

The practice was also designed to help the firefighters "tweak the process" and Engstrom said, "We will make some changes, but overall, it went well."

While an emergency may seem a remote possibility, tons of hazardous chemicals move on Arkansas roads and trains each day.

"A train derailed and it was a potential toxic accident waiting to happen," Anderson said, recalling an experience in Altheimer.

Fortunately, the tanks carrying the hazardous materials were not punctured, he said.

But he also relied on Mutual Aid members for help.

"If someone needs help, we're going to help them. You never know when it will be you yelling for help," he said.

On Oct. 17, Mutual Aid Association members gathered for classroom lessons related to tanker training, but Saturday, they gathered to turn their book learning into practical applications.

This event was also designed to establish interdepartmental relationships.

While some see the word "volunteer" as something less than professional, when any firefighter puts on the suit, that person assumes all the risks.

No matter the background of each participant, Akines said, this type of training is critical, and the Mutual Aid group plans to continue offering these types of programs in the future.

For some, this is the first training of this kind and for others it serves as "refresher training," Anderson said.

Firefighting is a real team effort and it's vital each member knows and performs an assigned role.

Anderson said, "Many of the firefighters are volunteers, often with little experience but still willing to step up. Under the best of circumstances, fighting fires is dangerous work. It can injure or even kill." 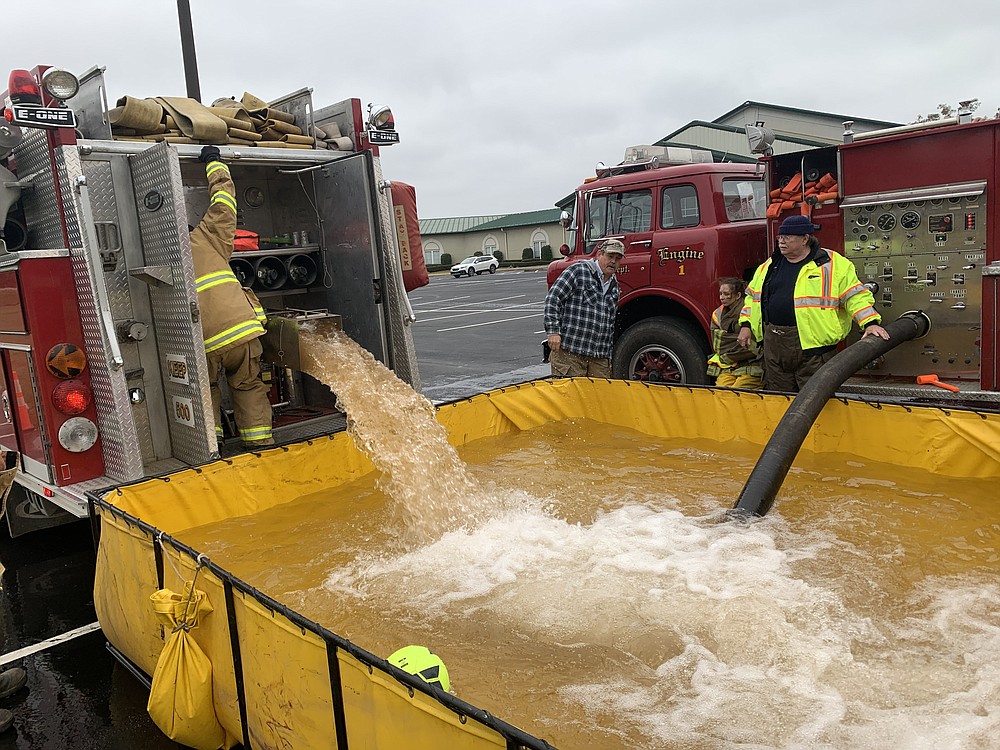