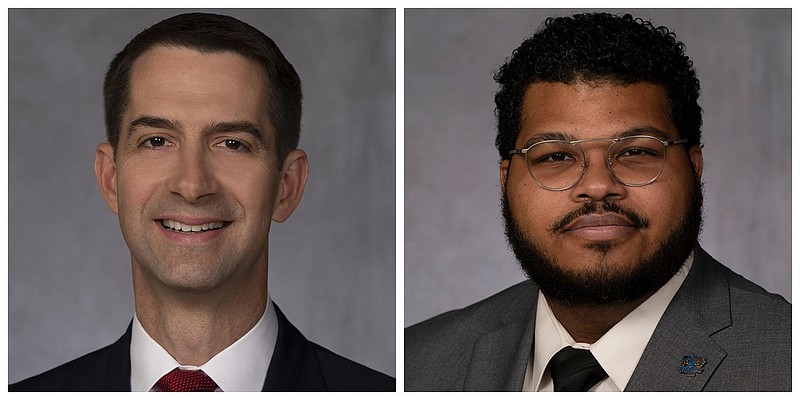 U.S. Sen. Tom Cotton doesn't have to worry about beating a Democrat this year; the party effectively conceded defeat nearly a year ago after the withdrawal of its only candidate.

Pine Bluff Libertarian Ricky Dale Harrington, a minister, former missionary and prison chaplain, is the only other candidate who qualified for the ballot.

Under state law, the voluntary exit of Democrat Josh Mahony of Fayetteville, mere hours after the filing deadline, meant the party would be unable to pick a replacement.

Democrats are still mystified by the abrupt departure.

"'Shady' is about the nicest way I can say it," said Democratic Party of Arkansas Chairman Michael John Gray. "We got deceived by our own candidate."

An independent candidate who entered the Senate race, Dan Whitfield of Bella Vista, also fell short after failing to collect enough signatures to qualify for the ballot.

As a result, the only man standing between the Little Rock Republican and a second term is Harrington, a Harding-educated father of three and a first-time candidate for public office.

"This is, certainly in modern times, the first time that no [Arkansas] Democrat has been nominated to run for United States Senate," said Republican Party of Arkansas Chairman Doyle Webb.

In fact, it's the first time since ratification of the 17th Amendment in 1913, which established direct election of U.S. senators by the voters instead of state legislatures.

The failure to field a candidate is a reflection of Cotton's "strength, his position and his great representation of the people of Arkansas," Webb added.

Many Democrats, dissatisfied with the incumbent, will be looking for an alternative on Election Day, he said.

"Hats off to Mr. Harrington. Tom Cotton deserves to be questioned and pushed and he deserves to lose a majority at the ballot box," Gray said.

The threat of a temporary Democratic-Libertarian alliance doesn't faze Webb.

"Sen. Cotton will be overwhelmingly reelected. He is a clear conservative who has had great influence on the national and international scene and we're proud to call him our United States senator," the party chairman said.

Cotton, 43, is the first Republican U.S. senator nationally to run without Democratic opposition since U.S. Sen. John Thune of South Dakota in 2010.

Mahony, the former candidate, did not return phone calls and emails from the Arkansas Democrat-Gazette seeking comment.

Despite the lack of a Democrat in the race, Cotton has raised $12.8 million this election cycle. As of Oct. 14, he had $6.5 million in his campaign coffers.

Freed from a major party challenge, the Harvard-educated attorney has had time to campaign for Republicans elsewhere, traveling to Georgia and Colorado in September.

This month, he made election-related stops in Montana and New Hampshire as well as a return trip to Georgia.

Cotton is frequently mentioned as a likely 2024 presidential candidate; during his first term, he's already made multiple trips to New Hampshire and Iowa, the first two stops for most White House hopefuls.

Harrington, who would be the first Black to represent Arkansas in the U.S. Senate, argues that Cotton has lost touch with his constituents.

"If you have someone that doesn't campaign in the state he's supposed to represent and doesn't have town halls, it's not about the people, it's about his power," he said.

Cotton says he's made numerous trips back to Arkansas, while also working hard to elect Republicans across the country.

Asked about 2024, he said he's focused, for now, on beating Democrats this November.

Cotton, a U.S. military veteran who served in Iraq and Afghanistan, sits on the Senate's Armed Services Committee, where he has advocated for increased defense spending.

He is also a member of the Senate Intelligence Committee, where he monitors threats to national security.

On Capitol Hill, while the U.S. Senate was focused on impeachment proceedings, Cotton was sounding the alarm about developments in Wuhan, China.

He called the unfolding health care crisis "the biggest and the most important story in the world," telling a Senate committee in January that "this coronavirus is a catastrophe on the scale of Chernobyl for China."

Cotton was one of the first to urge the White House to halt travel from China. He was also one of the first lawmakers to close his Capitol Hill office to visitors, a step taken one day before President Donald Trump declared a national emergency.

Asked how he rates the administration's response to covid-19, Cotton said, "I think we could have moved earlier and more aggressively."

"Likewise, I probably would've taken a pause [to slow the spread of the virus] earlier than we did," he said. "But I would have tried to get people back to work, back to school, back to church at an earlier date as well."

While responses may have been slow, in some instances, "I think there's also been a lot of great successes as well," Cotton said.

The effort to develop a vaccine is one example Cotton cited.

Harrington says thousands of Americans have died unnecessarily due to Trump's handling of the pandemic.

"I believe the administration should not have politicized it in such a way at first, especially saying that it was a 'Democratic hoax' and planting that seed in people's minds," Harrington said.

"There were some people that firmly believed that it was a hoax, they believed the president, and they caught the virus and passed away," Harrington said. "That's something that he's going to have to answer for, in this life or the next."

The two candidates haven't appeared on the same stage at the same time, thus far. The state's junior senator opted to skip a debate on public television with Harrington earlier this month.

As a result, Harrington, 35, had the stage to himself for an hour, and he thanked his opponent for the extra time, calling it "a great and wonderful birthday present."

"He said that he'd debate major party opponents. I thought that was appropriate precedent," Cotton said.

A poll, paid for by the Harrington campaign, depicted a far closer contest.

In the Talk Business poll, 62% of Democrats and 35% of independents said they planned to vote for the Libertarian. Cotton had near-unanimous Republican backing -- 97%.

Cotton led among major demographics besides Blacks and voters under age 30.

If Harrington tops 30%, it'll be the top showing in history by any Libertarian U.S. Senate candidate nationwide, party leaders said.

Here in Arkansas, when Republican U.S. Sen. John Boozman was up for reelection in 2016, Frank Gilbert, the third party's nominee, finished with 4% of the vote.

Libertarian Party of Arkansas Chairman Michael Pakko says Harrington has already raised more money -- $68,191, as of Oct. 14 -- than any Arkansas Libertarian who preceded him.

That's enough to buy billboard space in Little Rock, Hot Springs and along Interstate 40 near Clarksville and Morrilton, a campaign spokesman said.

Radio ads are running in Hot Springs Village and yard signs going up, a campaign spokesman said. A phone bank has also been launched.

"He's a solid candidate. He's really got some impressive things to say and I think he's made a good impression when he goes out and meets people," Pakko said. "We kind of feel like we caught lightning in a bottle with the Ricky Harrington campaign."

Cotton has said little about Harrington.

Instead, he is outlining his priorities and what he views as his accomplishments thus far.

Cotton has spent the past six years advancing the interests of Arkansans at the U.S. Capitol and hopes voters will give him a second six-year term so his efforts can continue, he said.

"Helping protect our state from the effects of this pandemic, both the health effects and the economic effects, helping get better health care to them by lowering the cost of prescription drugs for them, helping our veterans, helping our troopers all around the world: Those are the issues on which I'm campaigning," he said.

The two candidates disagree about many issues, including the best way to handle the unrest that followed the death of George Floyd in Minneapolis.

Cotton suggested using U.S. armed forces to restore order, arguing that they should give "no quarter" to those he labeled "insurrectionists, anarchists, rioters, and looters." Harrington rejected the idea, saying Cotton had exhibited a "blatant disregard for Americans' constitutional rights."

Cotton also defended the use of pepper spray and flash grenades to disperse protesters outside the White House. Harrington said the targeting of civilians, minutes before Trump strolled through the area and posed with a Bible, is "a stain on our nation."

Asked during the Arkansas PBS forum to list areas where he and Cotton agree, Harrington struggled to come up with examples.

The differences are especially pronounced when it comes to criminal justice.

Cotton has argued that the nation has an "underincarceration problem."

"The evidence shows that half of all violent crimes -- murders and rapes and assaults -- go unsolved and 80 percent of property crime -- robbery and burglary go unsolved. So anyone who thinks this country has too much policing or has an overincarceration problem, I would encourage them to tell it to the ... victims," he said.

Harrington, who has worked in the prison system, argues that incarceration rates are too high.

"If there's no clear victim, we do not need to be sending people to prison," he said. "It's immoral in my opinion [and] it is expensive for taxpayers," he said.

He also believes states -- not private entities -- should be responsible for the care of inmates.

"I think for-profit prisons need to be abolished. Staff is not paid fairly for the things that they have to tolerate and the living conditions for those in for-profit prisons are not up to par for someone trying to pay their debt to society," he said.