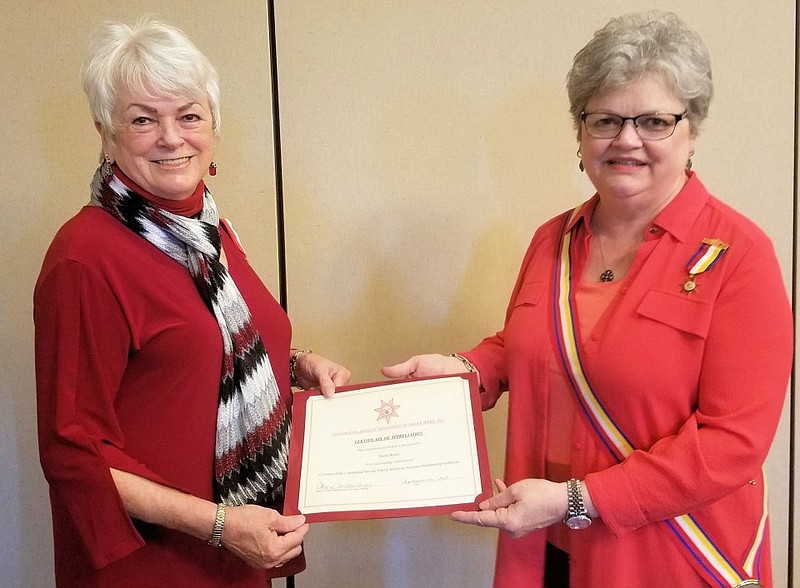 For those who believe they have American Indian ancestry, there may be another route to being recognized as such.

Pioneered by the Arkansas State Society, Continental Society Daughters of Indian Wars (CSDIW), the National CSDIW has implemented a new classification of membership, according to a news release.

State members include residents of the Pine Bluff area, a spokeswoman said.

For the new classification, applicants who can prove direct descent from a American Indian will be recognized with a special certificate and insignia.

Sheila Beatty-Krout designed the certificate. The National Society recently honored Beatty-Krout for "Outstanding contribution of the creation of the Continental Society Native American Ancestor Membership Certificate," according to the release.

Roberta Martin Fricke was named the first Native American Heritage Member of the Arkansas Society CSDIW by Warner in 2017. Fricke was admitted to the society through her Choctaw Indian ancestor.

Warner's primary objective was to recognize those who have American Indian ancestry, but may not be a member of any tribe, such as Beatty-Krout, whose family was rejected for citizenship in the Cherokee Nation on a technicality by the Dawes Commission, according to the release.

"The Dawes Commission was established by Congress in 1893. Its purpose was to exchange Indian tribal lands in the southeastern United States for new land allotments to individuals in Oklahoma. More than 250,000 people applied to this commission for enrollment and land. Just over 100,000 were approved," according to the release.

"CSDIW assists and encourages the preservation of records and historic sites associated with our native and immigrant American ancestors," according to the release. "Among its activities is the awarding of Native American Scholarships. The scholarships are awarded to enrolled tribal members who plan to work with a tribe or nation in the field of education or social service and whose career goals involve working with Native Americans."

The Arkansas Society also contributes to Bacone College, formerly Bacone Indian University, at Muskogee, Okla., and the Sequoyah National Research Center at the University of Arkansas at Little Rock.

Eligible candidates must prove lineal descendant of a Native or immigrant American ancestor who participated in any capacity in actual hostilities, one against the other, or in any other activity with each other, during the period May 14, 1607 to 1900.