OPINION | READ TO ME: There is such a thing as ‘Too Many Jacks’ 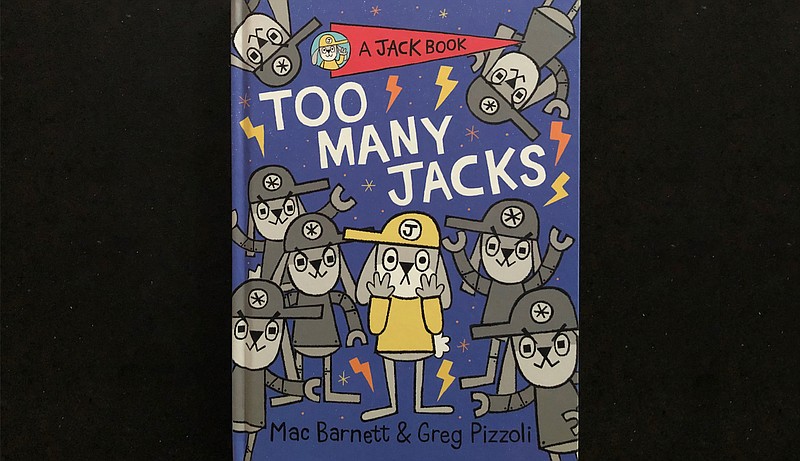 "Too Many Jacks" by Mac Barnett and Greg Pizzoli (Viking Books for Young Readers, May), ages 4-8, 74 pages, $9.99. (Arkansas Democrat-Gazette/Celia Storey)

STORY: When the latest Jack book appeared ("Jack and Santa," on sale since Oct. 13) this grandma thought, "Yippee! This is sure to be a fun story, just like ... uh-oh." Just like the two earlier Jacks published in the summer, which I bought but have not yet sent to my grandgirls because I didn't have a box.

Already they own "Hi, Jack!" and "Jack Blasts Off!" and "Jack Goes West" and "Jack at Bat," and so they know Jack. They know Jack is bad. He steals lipstick and scribbles with it. One time he robbed a bank.

Jack is a hardheaded rabbit with a dog named Rex. His exploits, meant to delight beginning readers, do in fact delight my girls. Maybe too much, because when I asked them on FaceTime whether they had read "Too Many Jacks," they pouted and said all the Jack books were in Mommy's room.

The stories are unpredictable and exciting. In this case, The Lady gives Jack a lab kit. But he wished for snacks. She says, "Just go play with your kit!" He storms off, but then he finds a test tube and fuses in the kit. After five days in the shed, he emerges with a bunch of robot Jacks. They start pillaging and soon amass a pile of money and snacks.

Even he sees they are out of control. He gets Rex to lick them until they short-circuit. The grateful town erects a statue — of Rex's tongue. As the story ends, Jack is yelling at Rex to stop licking his own tongue.