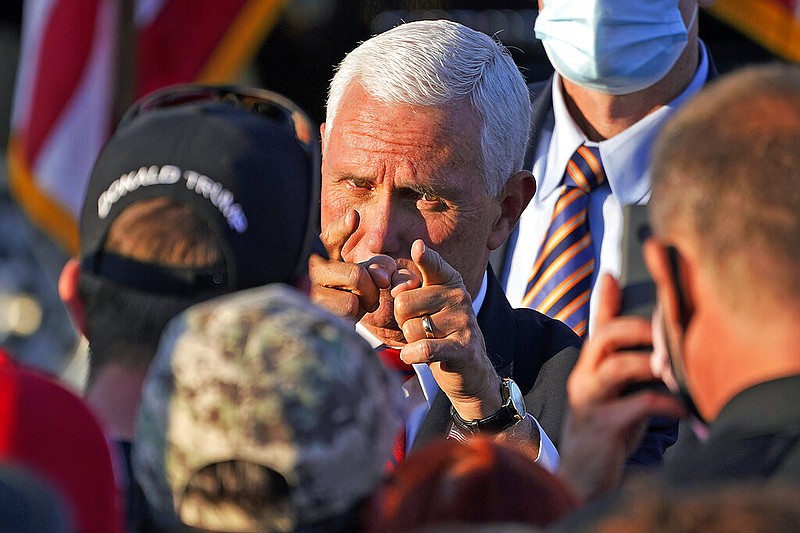 LONDONDERRY, N.H. -- The coronavirus has reached into the heart of the White House once more, little more than a week before Election Day, and the president's top aide says "we're not going to control the pandemic."

White House Chief of Staff Mark Meadows, pressed to explain why the pandemic cannot be reined in, said, "Because it is a contagious virus just like the flu." He told CNN's "State of the Union" that the government was focused on getting effective therapeutics and vaccines to market.

Pence, who tested negative on Sunday, according to his office, held a rainy early evening rally in Kinston, N.C., a state Trump won in 2016 and that is crucial to his reelection hopes. Meanwhile, the president held a rally in New Hampshire and visited an orchard in Levant, Maine, where he signed autographs and assured a crush of mostly unmasked supporters that a "red wave" was coming on Nov. 3. He and first lady Melania Trump wrapped up the busy weekend by hosting costumed children for socially distanced Halloween trick-or-treating on the White House grounds.

Former Vice President Joe Biden, the Democratic presidential nominee, attended church and participated in a virtual get-out-the-vote concert Sunday evening. He said in a statement that Meadows was effectively waving "the white flag of defeat" and "a candid acknowledgement of what President Trump's strategy has clearly been from the beginning of this crisis."

In a brief exchange with reporters before the orchard visit, Trump demurred when asked if Pence should step off the campaign trail as a precaution. "You'd have to ask him," Trump said.

The White House said none of the staff traveling with Trump on Sunday had been in close contact with any individuals in the vice president's office who had tested positive. But public health experts said that Pence's decision to keep up in-person campaigning was flouting common sense.

"If Pence did not self-quarantine it would violate every core public health principle his own task force recommends," said Lawrence Gostin, a public health expert at Georgetown University school of law. "It's one standard for the vice president and another for all the rest of us."

[Video not showing up above? Click here to watch » https://www.youtube.com/watch?v=tN9T73GWam0]

The U.S. set a daily record Friday for new confirmed coronavirus infections and nearly matched it Saturday with 83,178, data published by Johns Hopkins University shows. Close to 8.6 million Americans have contracted the coronavirus since the pandemic began, and about 225,000 have died; both totals are the world's highest. About half the states have seen their highest daily infection numbers so far at some point in October.

Trump, campaigning in Londonderry, N.H., said the rising rate of infections was nothing to be concerned about. "You know why we have cases so much?" Trump asked a shoulder-to-shoulder crowd. "Because all we do is test."

Entering the final full week before the Nov. 3 election, it's clear the Trump team remains committed to full-throttle campaigning. Trump himself has resumed a hectic schedule since recovering from his own recent coronavirus case, and planned to campaign today in Pennsylvania. Pence will campaign in Minnesota today and return to North Carolina on Tuesday.

Despite the rising virus numbers, the White House says the U.S. economy needs to fully reopen and it has tried to counter Biden's criticism that Trump is not doing enough to contain the worst U.S. public health crisis in more than a century.

Trump and his aides again on Sunday lashed out at Biden, claiming Biden was determined to lock down the economy, while the president is centering his attention on getting therapies and vaccines to market.

Biden has said he would only shut down the country if that is what government scientists advise. He has said that if elected he would make the case for why a national mask mandate might be necessary and would go to the governors to help increase Americans' mask-wearing.

Biden has made criticism of the Trump administration's handling of the pandemic a central theme of his campaign, while Trump has cast doubts on whether Democrats could have done better.

Trump has at times brought up the Obama administration's handling of the H1N1 swine flu in 2009, which caused an estimated 12,469 deaths in the U.S.

Campaigning for Biden in Florida on Saturday, former President Barack Obama took a swing at the current administration's handling of the virus.

"We literally left this White House a pandemic playbook that showed them how to respond before a virus reached our shores," Obama said. "It must be lost along with the Republican health care plan. We can't find it."

Pence's office says there are no plans to curtail campaigning. In addition to chief of staff Marc Short, who tested positive Saturday, a "couple" other aides also have also contracted the disease, Meadows said.

Meadows said Pence will wear a mask -- "because the doctors have advised him to do that" -- but take it off when he gives a speech.

Even with Pence's latest negative test, symptoms, including fever, cough and fatigue, may appear two to 14 days after exposure to the virus, according to the Centers for Disease Control and Prevention. Some asymptomatic individuals test positive two to three days before developing symptoms.

The White House says Pence was considered in "close contact" with Short under CDC guidelines. The guidelines require that essential workers exposed to someone with the coronavirus closely monitor for symptoms of covid-19 and wear a mask whenever around other people.

After consulting with the White House Medical Unit, Pence intended to maintain his schedule "in accordance with the CDC guidelines for essential personnel," said Devin O'Malley, a Pence spokesman.

However, the guidelines on essential workers from the CDC are aimed at people like police, first responders and key transportation and food workers.

The Department of Homeland Security spells out 16 categories of critical infrastructure workers, including those at military bases, nuclear power sites, courthouses and public works facilities such as dams and water plants.

"I don't see campaigning on the list," said Dr. Joshua Sharfstein, vice dean for public health practice at Johns Hopkins University and former Maryland state health department chief. "Anything that does not have to be done in person and anything not related to his job as vice president would not be considered essential."

Helping to maintain the function of the executive branch of government could be considered critical work, but "we've always historically separated campaigning from official duties," he said.

Meadows sidestepped questions about whether Pence's campaigning fit into the spirit of the CDC's guidelines for essential work. "He's not just campaigning, he's working," Meadows said.

The candidates have demonstrated different attitudes about what they see as safe behavior in the homestretch of a campaign that, as with all aspects of American life, has been upended by the pandemic.

Trump emerged from his own illness with even greater certitude that the nation has gone too far with efforts to stem the virus, and has spoken out repeatedly that children should be in school and healthy Americans should get back to normal life with limited restrictions. Biden has relied on virtual events and small, socially-distanced gatherings to make his case to voters.

Information for this article was contributed by Jonathan Lemire, Alexandra Jaffe, Aamer Madhani, Marilynn Marchione and Lisa Mascaro of The Associated Press; and by Yueqi Yang of Bloomberg News. 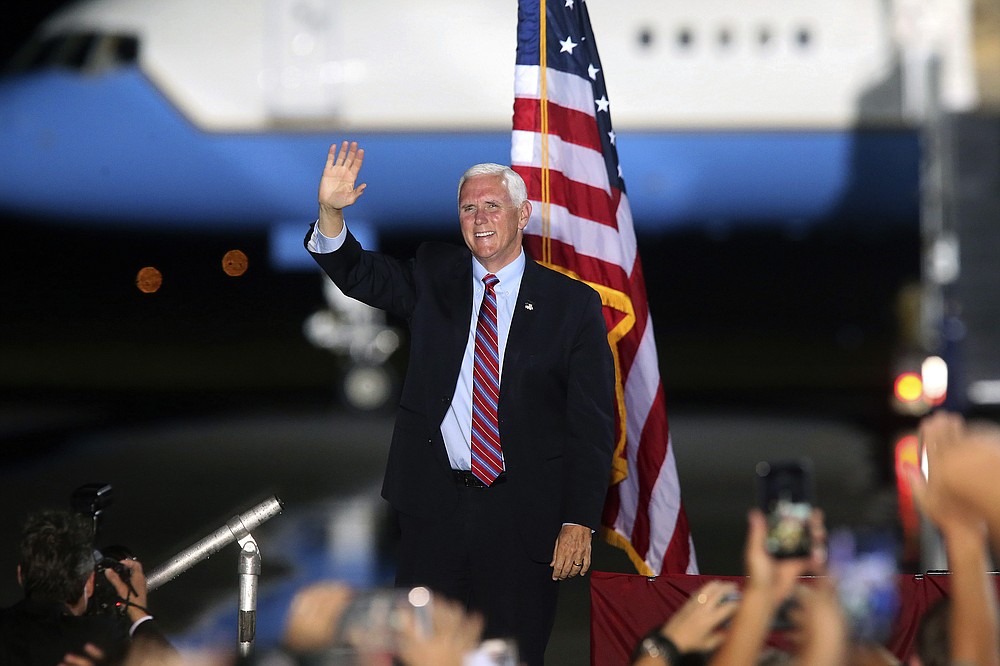 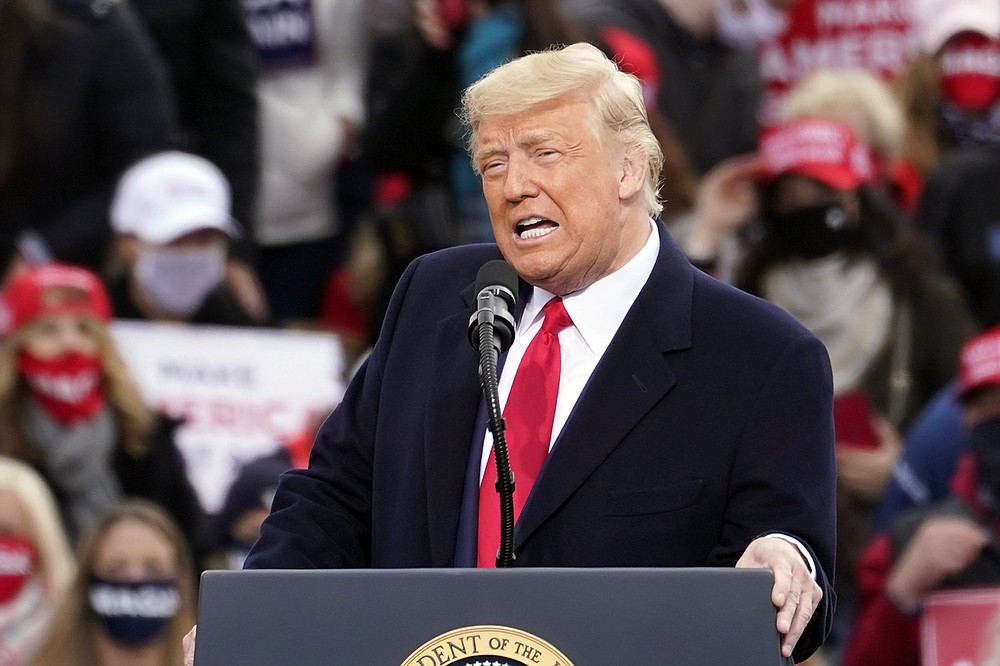 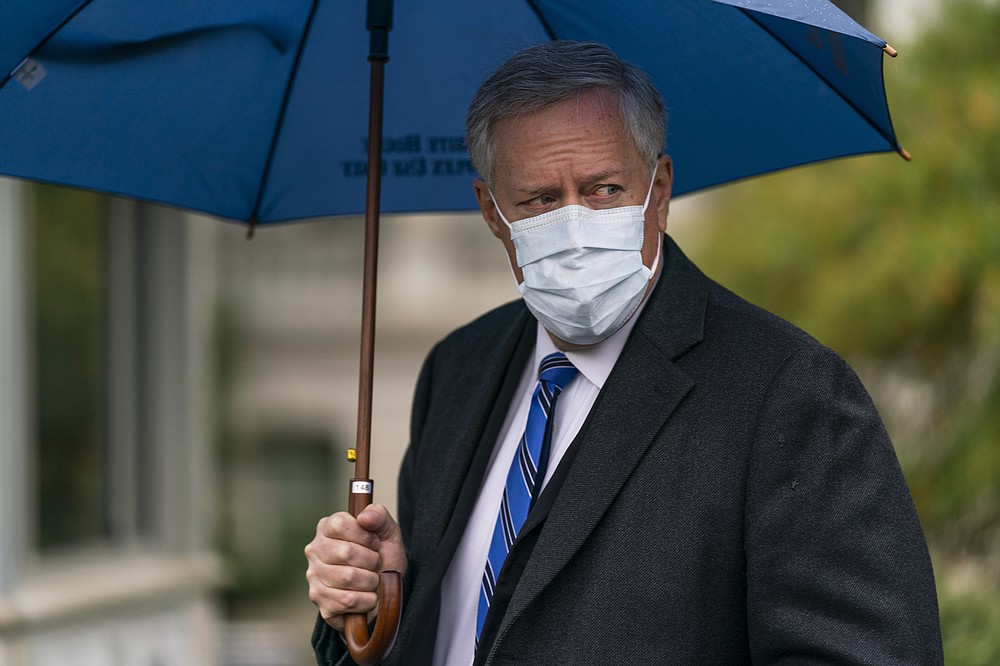 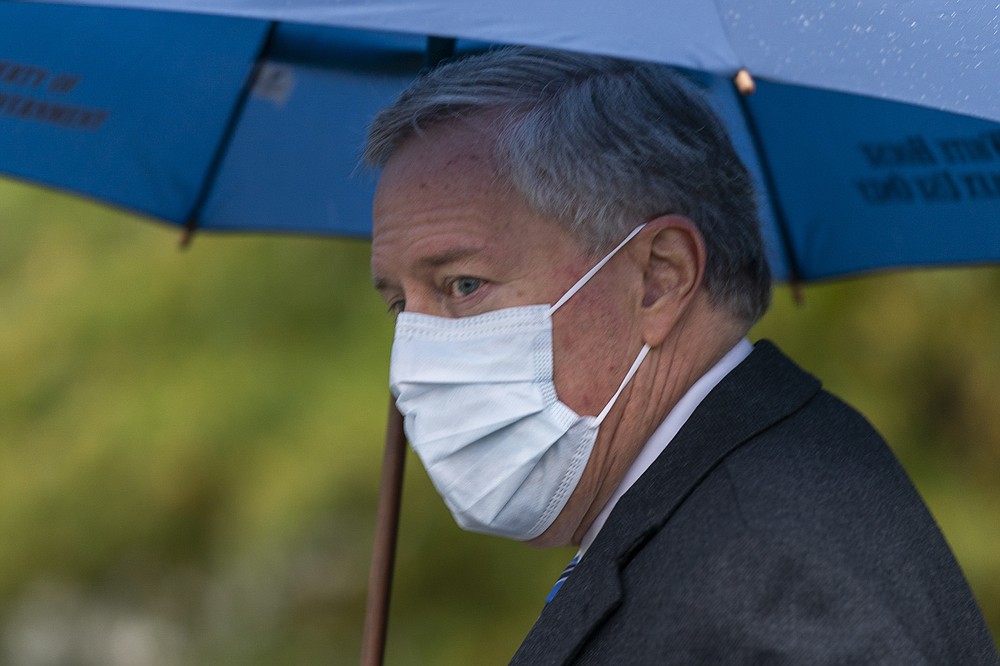 White House chief of staff Mark Meadows glances as he responds to reporters questions outside the West Wing on the North Lawn of the White House, Sunday, Oct. 25, 2020, in Washington. (AP Photo/Manuel Balce Ceneta) 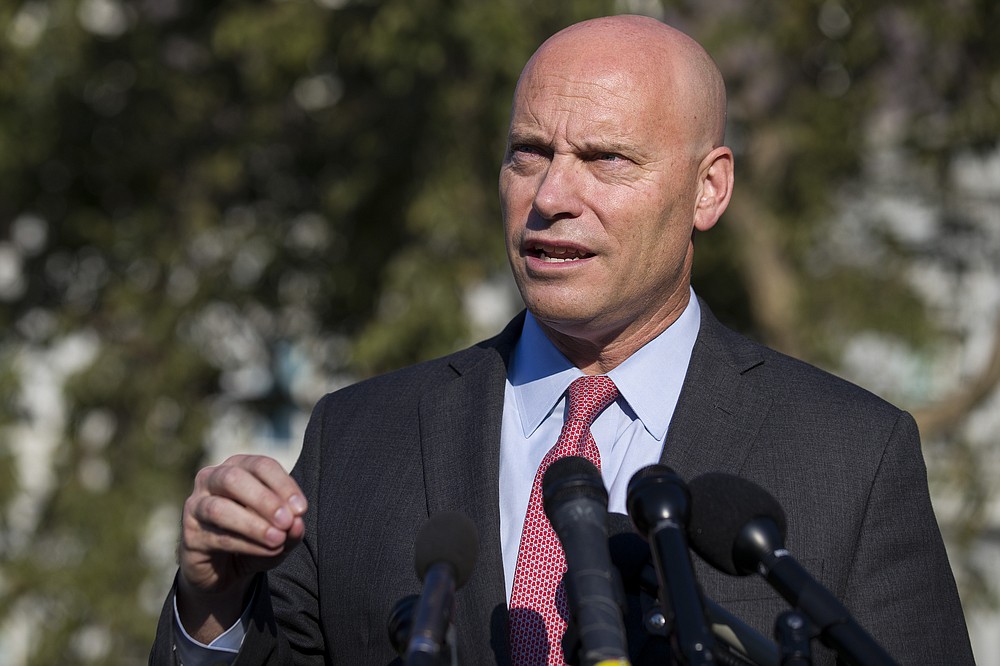 FILE - In this Monday, Sept. 16, 2019 file photo, Marc Short, chief of staff for Vice President Mike Pence, speaks with reporters at the White House in Washington. Vice President Mike Pence will maintain an aggressive campaign schedule this week the White House said Saturday, Oct. 24, 2020 despite his exposure to Marc Short, his chief of staff who tested positive for the coronavirus. (AP Photo/Alex Brandon, File) 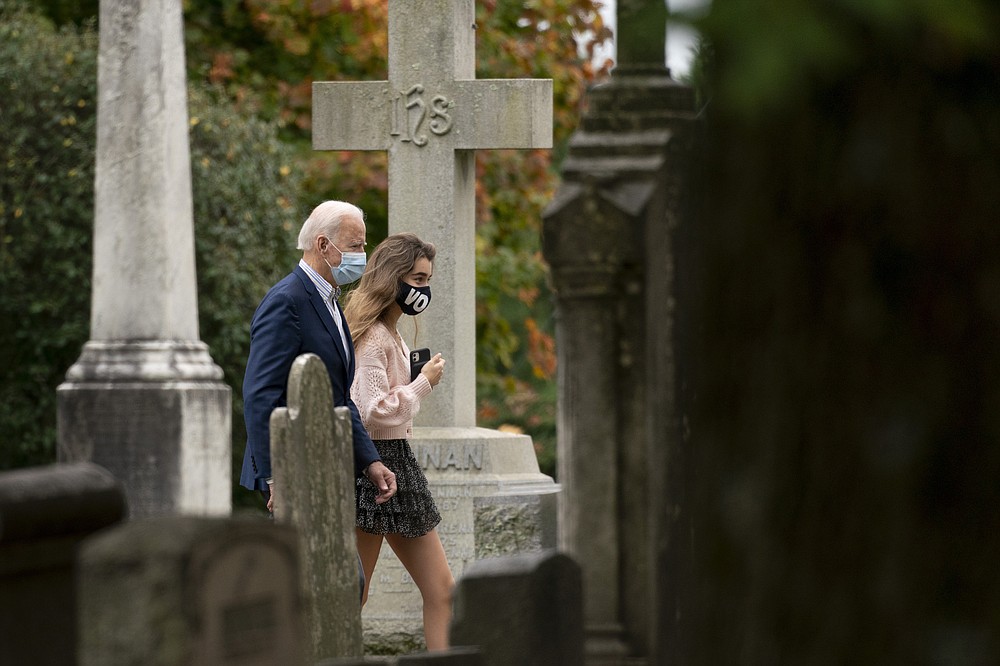 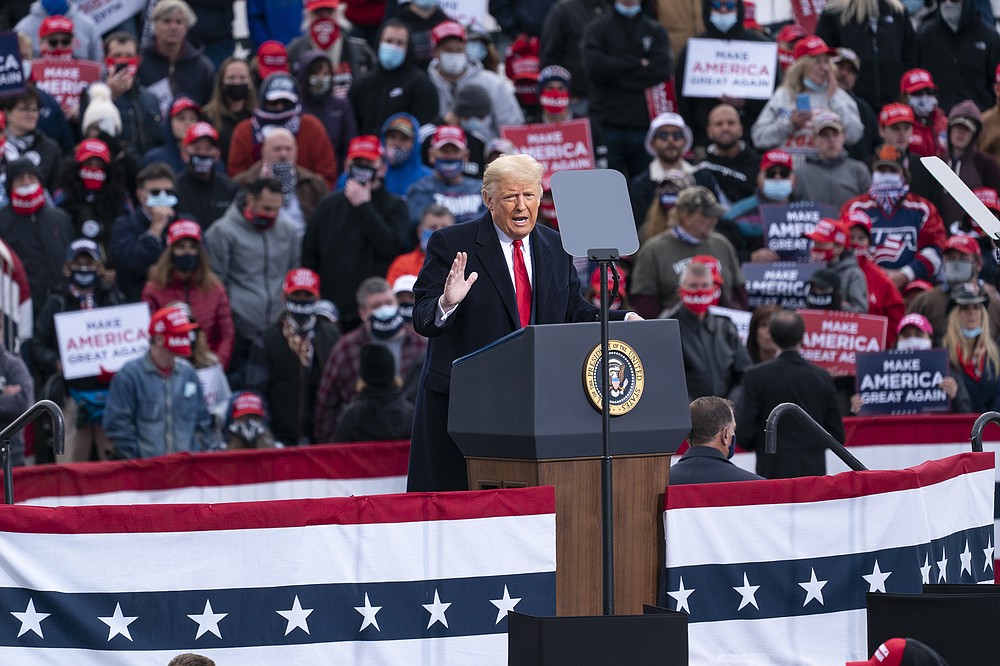 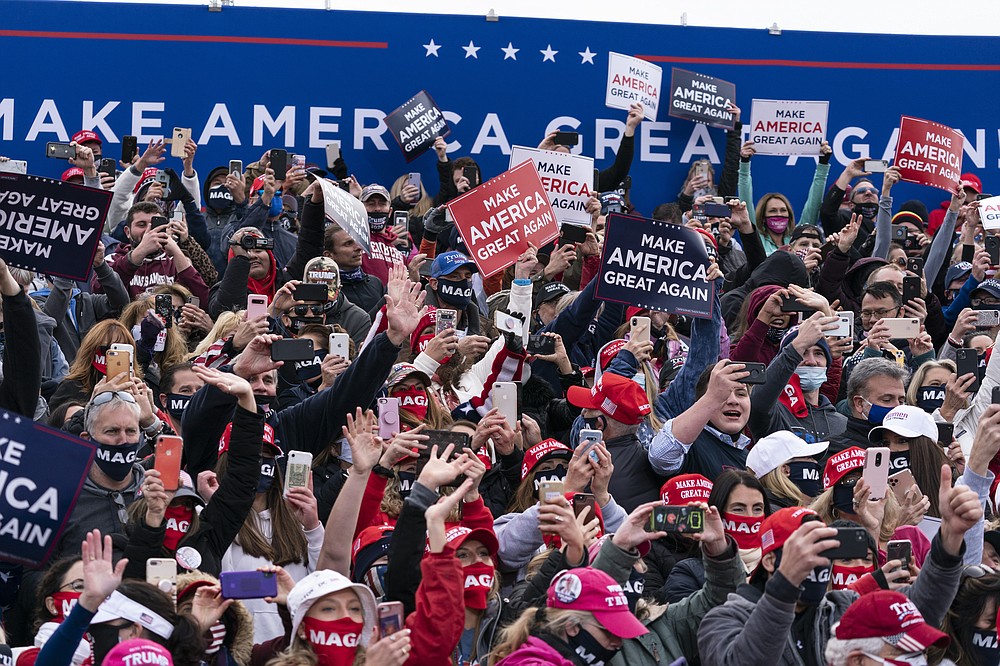 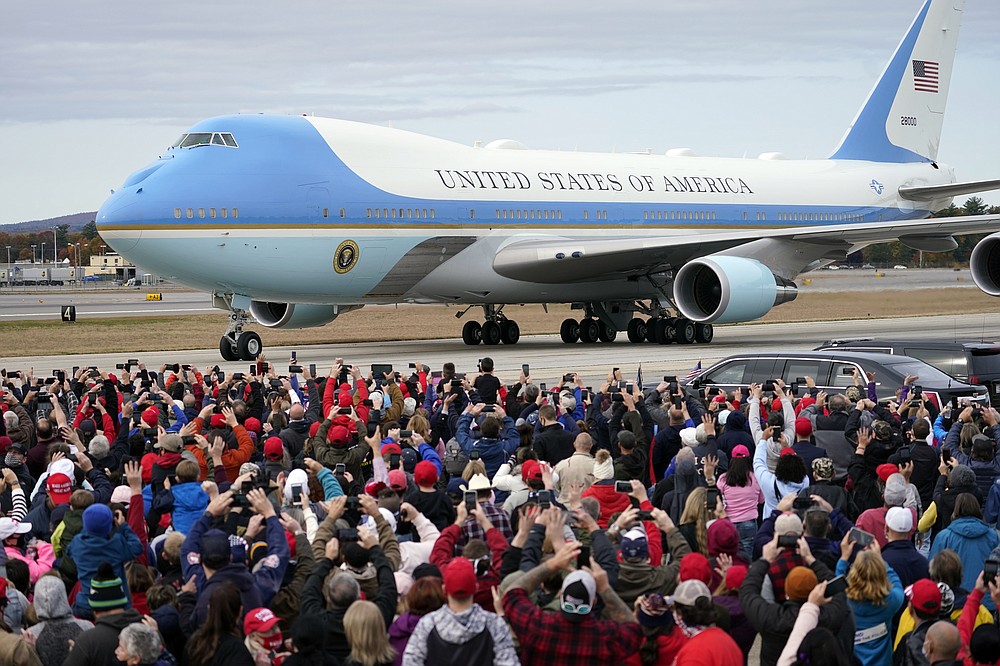