MY SO-CALLED MILLENNIAL LIFE: Strapping in to feel less confined 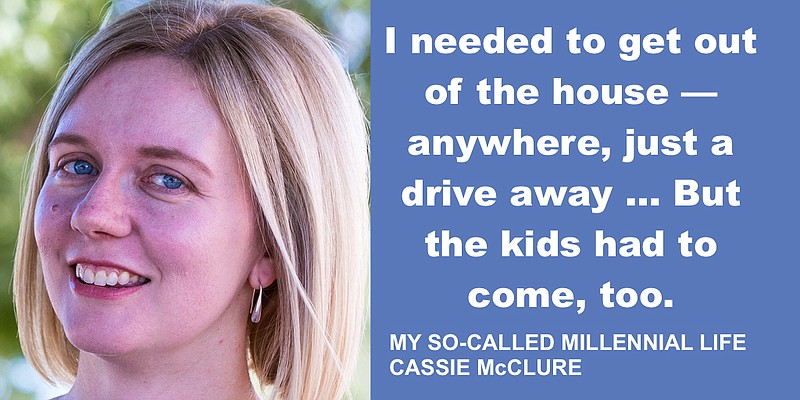 The newborn phase is a bit like war: no sleep, an unknown opponent, meeting different layers of yourself through caffeine and adrenaline, and learning to distinguish the urgency of loud yelling.

For both of my kids, the car was an elixir of relief, first for me and then for them, once they were lulled to sleep. They realized that no amount of yelling would stop the ride. Thanks to them, I also know all the circular routes in a 70-mile radius, the length of which I chose depending on the cantankerous need of my kid and the length of a podcast.

Now, we're getting kids who are developing an internal clock and can ask directly, "Are we there yet?" But recently, the cantankerous need came from me, with a bubbling stir-craziness that led me to suggest a day trip. Even though I've worked from home since before it was mandated to be cool, I needed to get out of the house — anywhere, just a drive away from the here and the now.

New Mexico is vast, with long stretches of land between cities and sights. I suggested a specific ghost town to fit the season. My husband suggested the nearby City of Rocks State Park. Sold. It would be a four-hour drive round-trip.

However, the first question that came from the peanut gallery came as we left city limits. "Are we close?" my 7-year-old asked. "Um, yeah, totally," I lied.

Twenty minutes later, outside the city limits of the last Walmart that would have beer, the kids were overjoyed at the prospect of the trip ending as we pulled into the parking lot. Exasperated sighs as I ran in. Thankfully, Capri Suns tossed into the back seat staved off more questions, until we left buildings for yuccas. "I mean, why didn't we just take a plane for this?" huffed the 5-year-old. No questions anymore, just sass.

I had to drum up some enthusiasm and exaggerated direction-giving for my husband, who, in turn, gave me the side-eye on the two-lane road in the desert. Fifteen miles. Ten miles. It'll be on the right.

There were no other turns.

The park ranger was the next novelty, asking if we were from the state (only state residents are currently allowed in our parks). He apologetically explained what was closed and what was reserved but gave a location tip for a picnic. I turned back to see that, without prompting, both my son and daughter had silently put on their masks to mimic me, my husband and the ranger.

When we parked, the kids shot out of the truck faster than a rattlesnake lunging out at prey. They would picnic in phases, running between boulders and cajoling my husband to play hide-and-seek as I sat, drank and stared into the horizon. There were no walls, and there was no noise, just the silence of the wind through the grass.

We've missed traveling, as many others likely have. Admittedly, as a young family, we're not that good at it yet. We're haphazard campers. We overpack and don't plan correctly. In general, we are perfectly content getting a simple hotel room that includes pool access. When all the typical momentum that shakes off the normal routines was kept inside our four walls this summer, it became harder to bear. It's been hard for so many others cooped up all around the country.

But maybe it's the journey we miss more than the destination — the experiences at the end that are tantalizingly unknown when we travel to shake off the dust and be together.

As a country, together we're strapped into a strange journey right now, and no amount of yelling will get us off the ride. However, maybe we can come through the other side with the other joy of traveling: the sense of relief of coming back. Even if the dishes are piling up, the bills are unpaid and our beds are unmade, it's still our home.

Cassie McClure is a writer, wife/mama/daughter, fan of the Oxford comma (Sorry, Cassie) and drinker of tequila. Some of those things relate. She can be contacted at