UA coaches mad about their movies 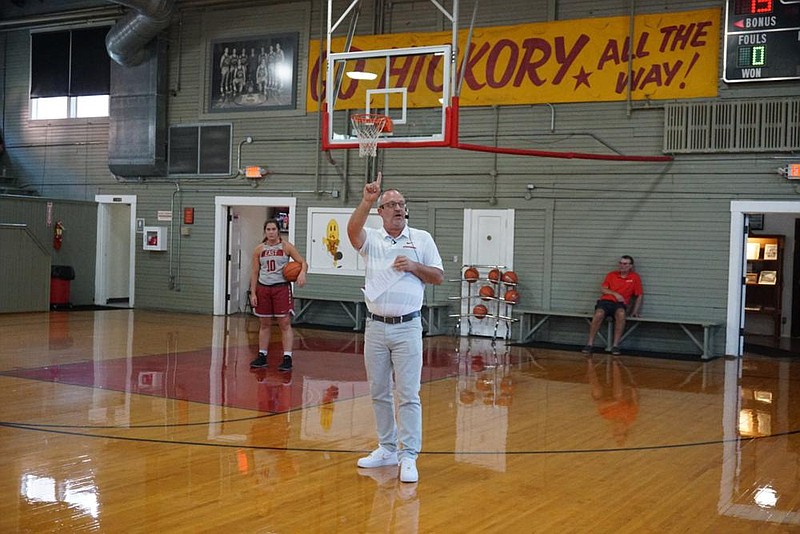 Arkansas women’s basketball Coach Mike Neighbors participates in a clinic in Knightstown, Ind., at a gym used during the filming of the 1986 movie “Hoosiers.” Neighbors, an admitted movie junkie, lists “Hoosiers” as one of his favorites. (Photo courtesy of Mike Neighbors)

FAYETTEVILLE -- Mike Neighbors' passions of basketball and movies were brought together at a tiny gym in Knightstown, Ind., in August 2019.

Neighbors is coach of the University of Arkansas women's basketball team and has his own page on the IMDb database with 1,078 movies ranked.

The 1986 movie "Hoosiers" -- which tells the story of the Hickory Huskers, a small-town Indiana high school team winning the state championship -- is the No. 1 sports film on Neighbors' list.

So Neighbors was thrilled to accept an invitation to speak at a clinic held at the Knightstown gym, which was built in 1921 and in "Hoosiers" served as Hickory's gym.

"I grew up in Greenwood, a small town like in the movie, and when it came out I still had dreams of being a basketball player," Neighbors said. "There was just a lot of overlap between my life at the time and the movie.

"There weren't a lot of basketball movies at the time. That one really captured me and through the years just keeps getting better and better. It's very high for re-watchability and quotability.

"When I got a chance to do a basketball clinic in that gym, I jumped at it. Being there was an awful lot of fun."

Neighbors was among several Arkansas coaches, and UA Athletic Director Hunter Yurachek, who ranked their top sports movies for the Arkansas Democrat-Gazette.

It's a diverse list that hopefully will provide sports fans with some ideas for movies to watch -- maybe some old favorites they haven't seen in a while or ones they've never heard about previously -- when many of us are spending more time at home during the covid-19 outbreak.

Sam Pittman, in his first season as the Razorbacks' football coach, has "Hoosiers" No. 5 on his list.

No surprise, Pittman's top four movies all involved football, with "Greater," which was released in 2018 and tells the inspiring story of Brandon Burlsworth's journey from walk-on to All-American for Arkansas, at No. 1.

Eric Musslemen, the Razorbacks' men's basketball coach, has "Hoosiers" No. 2 on his list behind "Moneyball," a 2011 movie based on a book of the same title that chronicles Oakland A's General Manager Billy Beane's innovative use of analytics to put together a winning team on a modest budget.

"An industrywide game-changer," said Musselman, who when he was the Golden State Warriors' coach was Beane's neighbor. "Analytics has spread from baseball to all sports."

"Loved the perseverance of a walk-on turning into a star," Musselman said.

Musselman's No. 6 movie was "The Fish That Saved Pittsburgh," a 1979 comedy starring basketball great Julius Erving.

"Hard for the Hog AD not to have this in my top 10," Yurachek said. "An incredible person and story, plus cameo appearances by Kevin Trainor and David Bazzel."

The No. 1 movie for Courtney Deifel, Arkansas' softball coach, is "A League of Their Own." The film, which was released in 1992, is about the All-American Girls Professional Baseball League during World War II.

"I think it's a real cool story line and movie together that just empowered female athletes," Deifel said. "What that movie shows to a lot of young girls watching it, is that they can do it. They just need the stage."

Geena Davis, who starred in "A League of Their Own" as catcher Dottie Hinson, founded the Bentonville Film Festival in 2015. A year later, Davis and several cast mates from the movie played a softball game at Arvest Ballpark in Springdale. In 2017, she threw out the first pitch at an Arkansas softball game at Bogle Park.

"Our student-athletes were big-eyed over Geena Davis because of that role she played," Deifel said. "Seeing them look at her as Dottie Hinson and how important that movie was to them and how much they loved it, it was just a really cool day out at Bogle.

"They could relate so much to a movie that was made before they even were born."

Lance Harter, coach of the UA women's cross country and track teams, said he doesn't believe "Personal Best" is a particularly great movie, but he put it No. 5 on the list.

Harter's connection to the 1982 movie starring Mariel Hemingway is that part of the story line involves the track and field program at Cal Poly-San Luis Obispo, where at the time Harter was the coach.

Scott Glenn plays the Cal Poly coach, who is rather harsh in his treatment of athletes.

"It probably hurt me a little bit, because parents started hearing about the negativity of Glenn's portrayal of coaching these two heptathletes," Harter said. "It was pretty over the top.

"There also were some people who would call our office and say, 'Hey, it's really important I get in touch with Mariel Hemingway.' I had to tell them, 'Sorry, I can't help you with that.' "

During a road trip about 20 years ago, Harter and the Razorbacks met Daniel Ruettiger -- whom the movie "Rudy" about a Notre Dame walk-on football player was based -- at an airport.

"We were in line checking in for our flight and [Ruettiger] saw we were a team and he started talking to the kids," Harter said. "When he said he was the real-life 'Rudy,' our kids immediately knew what he was talking about.

"He had a briefcase, and he pulled out all these 8-by-10 photos and signed them for everybody, and then he gave a very motivational talk that we all really enjoyed."

Chris Bucknam, coach of the Arkansas men's cross country and track and field teams, had inspirational movies "Cinderella Man," "Miracle," "Remember the Titans" and "Secretariat" as his as his top four, but he also included "Caddyshack," the 1980 golf comedy.

" 'Caddyshack' is awesome," Bucknam said. "If 'Caddyshack' comes on tonight, I'm watching it. Every time it comes on, I watch it. Just a really fun movie."

Brad McMakin, the Razorbacks' men's golf coach, has "Glory Road" No. 3 on his list. The 2006 movie tells the story of Texas Western's basketball team winning the 1966 national championship with an all-Black starting lineup, capped by a victory over Kentucky.

"Any story of beating Kentucky has to be a top five," McMakin said.

Yurachek has "Field of Dreams" as his No. 1 movie, but along with several coaches, he also lists some of the "Rocky" boxing series with "Rocky" and "Rocky II" tied for seventh.

Harter has "Rocky" and "Rocky IV" in a first-place tie.

"The 'Rocky' movies are just so motivational," Harter said. "The story itself and the music is so well done."

"Rocky" won the Academy Award for best picture of 1976.

"What I admire is that [Sylvester] Stallone wrote it, directed it, starred in it," Harter said. "The guy did everything. It was incredible."

Neighbors has "Rocky IV," in which Rocky defeats a Soviet boxer, No. 3 on his list.

"I grew up during the Cold War where we hated the Russians," Neighbors said. "That was the first movie that I ever stood up and cheered for at the end."

Neighbors grew up going to the movies.

"When I was younger, my mom would drop me off at the mall and I'd watch two or three movies a day while she went shopping," he said. "I think the statute of limitations has passed, so I'm OK to admit that I'd buy one ticket and see three or four movies on it. I was pretty industrious when it came to that."

Neighbors took a break from college for two years and was the manager of a Blockbuster video store in Fayetteville.

"I thought Blockbuster stores were going to be around forever," Neighbors said. "Then we went to the national convention in Florida and [company owner] Wayne Huizenga stood up in front of everybody and said, 'Netflix is trying to take over and that's not going to happen. That idea is never going to catch on.'

"I remember looking at my franchise boss and saying, 'Netflix sounds like a pretty good idea to me. Are you sure this video store stuff is going to work out?'

"I went back to school the next year and got my degree so I could start coaching."