Virus or no, colleges in Arkansas push voter registration 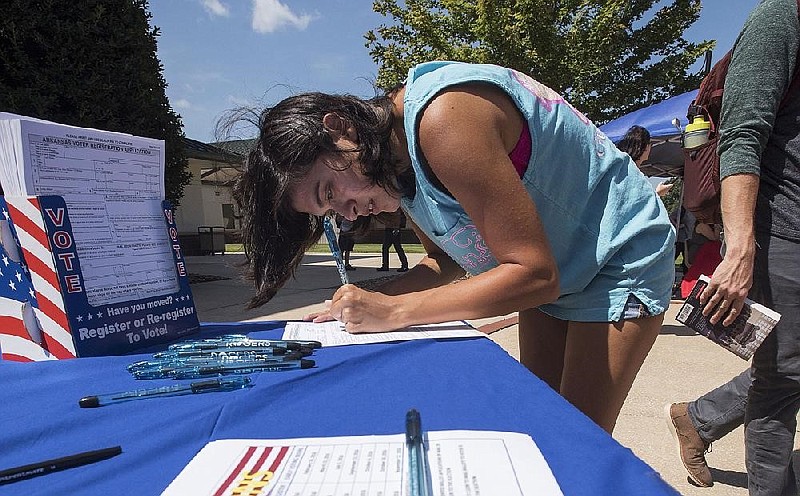 Ashley Morales registers to vote on the Northwest Arkansas Community College campus in Benton County in this August 2016 file photo. Morales was a student at the time of the photo.

Voter registration drives and campaigns for competitive candidates are normal features of a college campus during general election years, but it's not quite the same this year.

By law, colleges have to make "good faith" efforts to distribute voter registration forms, according to the American Association of Collegiate Registrars and Admissions Officers. That's part of the 1998 Reauthorization of the Higher Education Act of 1965, and it pertains to elections for state and federal offices.

So outreach must continue even during the most socially distant of times, such as the covid-19 pandemic.

Nikiah Willis, a 20-year-old speech pathology major, took to her sorority's Instagram to make sure her message to students was seen, though not heard.

On the University of Arkansas at Little Rock Zeta Phi Beta account and then on her own Facebook page, Willis posted a minute-and-a-half video of her using American Sign Language, with subtitles, encouraging people to vote.

"Your voice is your power," she signed.

Willis thinks about access and inclusion. She wanted to learn sign language to widen the scope of people she could help as a speech pathologist. She also wants to help everyone vote and remind everyone to do so.

"Deaf people can't hear but can still get out to go vote," she said. "I know that the community is overlooked a lot."

For Willis and others, this year is big. With everything going on, she said, people need to think about which candidates align with their values and understand that policies can harm people.

Get-out-the-vote campaigns are being pushed as college student voter turnout has increased in recent presidential elections. Younger, newer voters don't turn out in as high of percentages as voters overall.

A lot of the messaging about how to vote is happening online, with many college students staying off campus these days.

"Social media is really the new way to get out the vote," said Drew Martin, president of the UALR College Republicans.

Social media platforms themselves have compiled information for users on how to register and vote in their respective locations. Martin, a master's student in public administration, and others are optimistic that has helped where the typical on-campus voter information booth could not.

Still, some students have gone beyond online campaigns to encourage voting, addressing people they know personally.

"People do things when they see the people they know, love and trust are doing them," he said.

Willburn, a senior marketing major at UALR, and his Alpha Phi Alpha fraternity also did a video that explains how and when to register and vote, and how to request an absentee ballot, if the students aren't currently living where they are registered.

And voter information booths can still be found on campuses.

Willis volunteered at a voter registration table a few weeks ago, outside Ottenheimer Library at UALR. UALR administration held two drives this fall.

Willis thinks more people would have gotten to the booth if there wasn't a pandemic that pushed most students to online-only learning. A few people registered to vote in the hour she volunteered, and a few more asked how they could change their voter registration to a new address.

In the video, the two men, wearing masks as they stand several feet apart, discuss how and when to register to vote, covering such things as how to change a voter registration address, request an absentee ballot and cast an Election Day ballot on campus. Kirksey, a political science major, has been among those leading voter registration drives on campus.

The Sun Belt athletic conference also created a voter registration portal for all of its dozen campuses to use, and created a leader-board for the universities to compete against one another.

That's the webpage volunteers often asked people to use to register, Willis said.

ASU also will continue to host a polling site on Election Day. So will Hendrix College, which is remote-only learning this fall.

The fact that many students are taking classes online this fall could interfere with a student's previous plans for voting. For example, the person may have intended to vote on campus but now is far away and must submit an absentee ballot.

Lyon College in Batesville has never had a polling site on campus, so the fact that the college is remote-only learning this fall, with some exceptions for some students who live on campus, won't impede students' voting plans there.

However, the college normally has hosted voter registration booths for students. That didn't happen this year. This time, the college sent information about voting virtually, using different student organizations.