WATCH YOUR LANGUAGE! Words that fly to mind approached with 'aplomb' ... or a plum 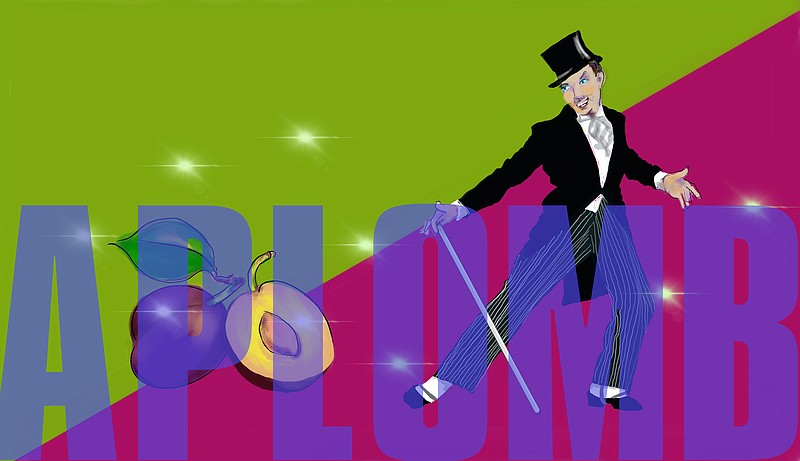 This week, I'll reveal some of the bounding unpredictable activity in my mind's recesses. Don't be afraid.

I started thinking about the word fly.

You might think you know what led me to ponder this word. A debate perhaps? But you'd be wrong. I have recently been hearing the phrase about doing things "on the fly."

When I hear that phrase, I imagine tiny people using a fly as a work surface.

I'm doing my homework on the fly. It's a little bumpy but I don't have a real desk.

Of course, that's not what the phrase means. When you suddenly decide on a Friday to go away for the weekend (wow, I miss those days), that's a trip you're taking on the fly. The decision didn't involve a lot of preparation or planning.

I didn't know that on the fly was also used in the computer world, but the concept is a little hazy to me. One can make some changes to an application while the application is still running. That's called doing something on the fly.

If you have a better explanation, please send it my way.

The word aplomb never fails to amuse me. It's a perfectly fine word. It means poise and grace and other good traits. One typically does something "with" aplomb.

A person might explain a difficult topic with aplomb.

After an injury scare, an athlete might return to a game with aplomb.

A conductor could lead an orchestra with aplomb.

But what do I think of whenever I hear the phrase? A plum.

The person uses a plum to explain a difficult topic.

A conductor holds a plum to lead the orchestra.

For this reason, I am unlikely to ever use the phrase "with aplomb."

Does anyone still use the word behoove? Maybe someone said it in "Downton Abbey"?

A reader asked about it, and I can't say I hear it often. First, it makes me think that something "behooved" has hooves. (This, in turn, reminds me of my friend who says "duck confit" means duck with feet.)

But when something behooves you, it benefits you or would be proper. I'm not sure I'd use the word with a straight face.

Before the government or advertisers impose rules upon [tech companies] that would undermine their business model or affect their content, it would behoove them to end the hostility toward outside criticism.

Given the tumultuous state of politics, I can only laugh at the word politic. The adjective politic means prudent, judicious or tactful.

She decided it wouldn't be politic to talk about her days as an exotic dancer.

I like this word, but I don't think I'm cool enough to use it. Skosh simply means a small amount or a smidgen. The word comes from a shortened form of the Japanese word sukoshi, meaning a tiny bit. U.S. soldiers stationed in Japan after World War II shortened the word to skosh.

Merriam-Webster reports that skosh is in the top 2% of words for "look-up popularity."

I think this means people hear it and usually don't know what it means. Please let me know if you hear it any time soon.

I'm not sure where I read this phrase, but it's just weird. A brown study is a state of deep, somewhat morose, contemplation. Centuries back, brown was associated with gloominess. It has nothing to do with a household's study that is painted a dark beige. It reminds me a little of woolgathering or daydreaming. I tried to find newspaper articles using brown study. The closest I could come was some scientific work performed at Brown University. Thus, a Brown study.

I fell into a brown study as I walked on, and a voice at my side made me start.

And I like the word throes. It means a painful period of time. I'm not a fan of pain, but I like the word's succinctness. In examples I found, it was always phrased "in the throes of." Basically, you're better off avoiding throes.

She was in the throes of childbirth.

The nation was in the throes of the lingering coronavirus.

The company was in the throes of downsizing.

The region was in the throes of a drought.

Here's how my sick mind would use it:

The pitcher's wayward throws showed he was in the throes of a stinging loss.

But I do hear childbirth is far worse.

And I'll end with shambolic, which also describes the recesses of my mind.

Merriam-Webster says it's primarily a British word, and it means chaotic and disorganized. Numerous Washington Post stories describe Britain's exit from the European Union, or Brexit, as shambolic. The American Heritage Dictionary says it might come from the word shambles. I'm sticking with shambolic.