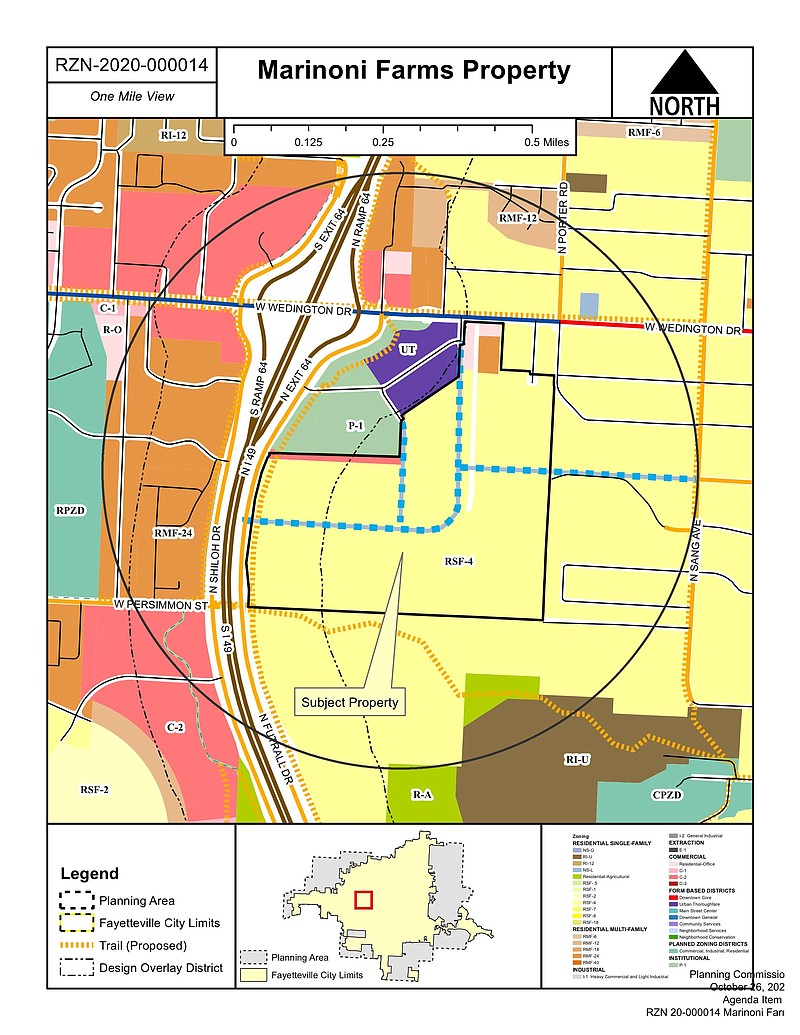 FAYETTEVILLE -- The magnitude of potential land uses and density for a proposed rezoning at the Marinoni family farm prompted planning commissioners to hold off on making a decision Monday.

The commission voted 8-0 to hold until Nov. 9 the rezoning request for more than 100 acres of farmland southeast of Interstate 49 and Wedington Drive, north of Markham Hill. The land is zoned mostly for single-family homes, with office and multifamily zones facing Wedington, but operated as the Marinoni family farm for more than 70 years.

The meeting was held online via Zoom. Commissioner Matt Hoffman was not in attendance.

The rezoning would change about 85 acres to an urban thoroughfare zone and 23 acres to a community services zone. Both zoning types are intended to provide goods and services to nearby communities, according to city code. Both allow a mix of commercial and residential uses.

In a letter to the commission, landowner Paula Marinoni said she envisioned a live/work/play area. The rezoning would allow neighborhoods to the east to walk to restaurants and amenities and connect to trails, she said.

The city agreed last summer to acquire about 60 acres to the south at Markham Hill from the University of Arkansas for soft-surface trails and tree preservation. Specialized Real Estate Group, which owns more than 140 acres at Markham Hill and plans to build homes, also has agreed to preserve about 50 acres with soft trails for public use. The city also is developing Centennial Park as a mountain biking attraction at Millsap Mountain, west of I-49.

Marinoni said she hoped to have the land developed over time. The proposal included street connections, and with a rezoning in place, Marinoni said she wanted to work with the city on what would be built at the site.

"Who do we want? Go get them," she said. "But to get them to come here -- you look and you go, 'Well, there's a field.' You've got to have streets, you've got to have zoning or they're just not going to come."

One neighbor asked about what could be built near her home. Planning staff said the city received words of support for the rezoning from three residents in letters and phone calls.

Some planning commissioners said they wanted to see a more detailed proposal for the site. Commissioner Rob Sharp said he was uncomfortable with a blanket rezoning. He said the urban thoroughfare zone, for example, makes sense near I-49 and Wedington Drive, but not deep into the property.

"If we can't see a coherent plan that talks about geology and natural preservation and traffic and parks and mixing houses with jobs, I don't see any way we could be asked to do this mass rezoning," Sharp said.

A few commissioners mentioned asking for a detailed zoning plan, known as a planned zoning district. Assistant City Attorney Blake Pennington said the commission cannot require someone to submit a planned zoning district. The commission could recommend denial of the rezoning request to the City Council, or break apart pieces into different rezonings, he said. The council will make the ultimate decision on the rezoning.

Commissioner Tom Brown said Marinoni painted a positive picture, and the rezoning she requested fell in line with the city's long-range plans. Brown cast the sole no vote against holding the request.

"I really think we'll be basically in the same position we are tonight," he said. "I don't believe we can deny a reasonable zoning the applicant has submitted."

Commissioners who voted to hold the item asked for more information from planning staff on the planned state overhaul of the I-49/Wedington interchange and potential impact on traffic.

In other business, the commission voted 8-0 to approve the plan for a 7,322-square-foot fire station on the east side of South School Avenue, south of 22nd Street. The station was included as part of the $15.8 million bond issue voters approved for fire facilities in April 2019. The commission passed the plan without discussion.

• A preliminary plan of Phase VII of the Sloanbrooke subdivision southeast of Broyles Avenue and Croft Drive, east of Woolsey Wet Prairie.

• A plan of a 14,400-square-foot fabrication and manufacturing building and 10,500-square-foot multi-tenant building at the industrial park, northeast of Morningside Drive and Pump Station Road.

• A permit for an in-home day care on Jerry Avenue south of Huntsville Road.