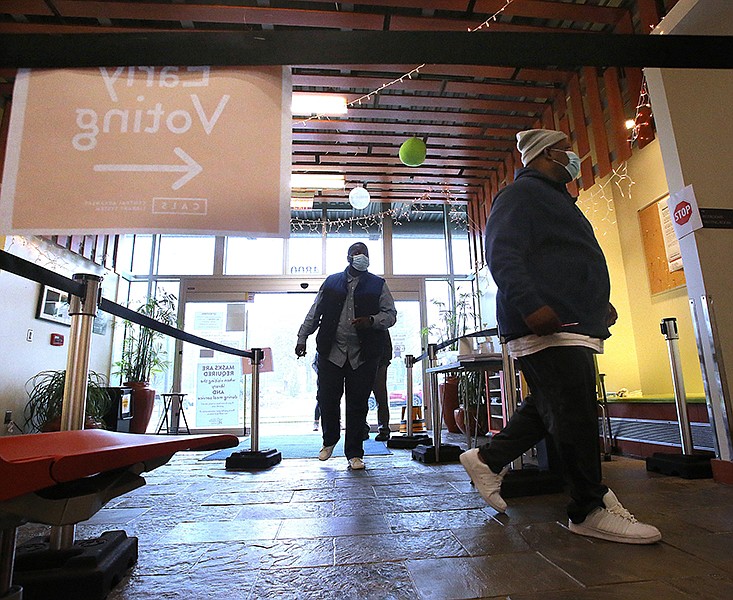 As early voting ahead of the Nov. 3 general election booms across Arkansas, federal judges in Fayetteville and Little Rock were kept busy Monday juggling lawsuits focused on absentee ballots.

In Fayetteville, U.S. District Judge P.K. Holmes denied the League of Women Voters' request for an injunction forcing the state Election Commission to allow voters to correct signature discrepancies on ballots. The League feared that without a court order, some otherwise-valid ballots could go uncounted because of technicalities or poor penmanship.

In Little Rock, a lawsuit filed Friday to ward off the possibility of a law being enforced for the first time to prevent absentee ballots from being counted after 7:30 p.m. on Election Day continued to bounce back and forth between Pulaski County Circuit Court and federal court, where it seemed to have landed by day's end.

John Tull, an attorney for two Pulaski County voters who filed the suit, said U.S. District Judge Brian Miller may hold a hearing on the matter Wednesday or Thursday.

"There has been a massive jump" over the numbers from four years ago, said Kevin Niehaus, public relations director for Thurston.

"I think early voting is going to trounce Election Day," Niehaus said, citing the coronavirus pandemic that he sees as the driving force behind the early voting surge. He said that while about 10% of people who vote will vote absentee, "I think more than 60% will vote early."

Holmes, of the state's Western District, issued a 10-page ruling denying the League's request for a preliminary injunction, saying they hadn't shown a likelihood of irreparable harm without an injunction.

The League had argued that absentee voters who aren't given a chance to cure rejections based on signature deficiencies will have no other recourse against being disenfranchised. The group's lawsuit noted that once a voter has submitted an absentee ballot, the voter cannot cast an in-person ballot that will count or apply for a second absentee ballot even if, unbeknownst to them, the first is rejected because of a signature issue.

Current law requires voters to be notified by mail after the election if there was a discrepancy and their votes were thrown out.

The lawsuit said Arkansas is one of only four states -- the others being Mississippi, South Dakota and Tennessee -- that requires signature matching and doesn't provide for any opportunity to fix the deficiency.

Holmes' order noted that before county election officials open absentee ballots on Election Day, canvassers have already reviewed a voter statement in an outer envelope and compared it with the voter's application, and set aside any questionable materials for review by the county board of election commissioners. He noted that under Arkansas Code Annotated 7-5-416 (b)(1)(F)(ii), if the board determines that there is a mismatch in the name, address, date of birth and signature, the ballot shall not be counted.

He said the state Board of Election Commissioners, a defendant in the lawsuit, provides training and guidance for county election officials. He said the state board directs county officials to "reject a ballot on the basis that the signatures do not compare only if there is a distinct and easily recognizable difference" between the two signatures.

Holmes noted that Gov. Asa Hutchinson signed an executive order this year, because of the pandemic, making it easier for people to vote absentee and allowing county election officials to begin canvassing absentee ballots up to 15 days before the election.

The judge said that the possibility of having a ballot rejected gives the plaintiffs a vested interest in the outcome of the case, or legal standing to sue. But, he said, "the individual Plaintiffs have not shown that this rejection is likely enough to support preliminary injunctive relief before the election."

"Though that number itself is shockingly high, the individual Plaintiffs have not shown that their absentee ballots are more likely to be among the 600 rejected for signature mismatch than the 149,400 absentee ballots that would be rejected for some other reason, or accepted and counted," he said. The individual plaintiffs represented by the League include people with health conditions that make their writing shaky or may prevent them from properly completing a voter information form.

Holmes also cited public interest in declining to issue an injunction, noting that mandating an opportunity to cure deficiencies while absentee voting is under way "seems likely to further disrupt county election processes during a period that has already been characterized by a host of disruptive pandemic-related changes to voting procedures, and -- rightly or wrongly -- to undermine confidence in the electoral process."

As for the lawsuit focused on the cutoff time for county clerks to have absentee ballots counted, which was originally filed Friday in Pulaski County Circuit Court, no action has yet been taken.

It seeks to prevent the potential enforcement of a 2013 state law requiring all absentee ballots to be counted by 7:30 p.m. on Election Day. That is also the time the polls close, and the lawsuit notes that it sometimes takes longer to count all absentee ballots, so the law has never been enforced.

But because this year's election will involve many more absentee ballots than usual, it will be even harder to ensure that all ballots are counted by the times the polls close, even with the governor's executive order allowing some steps to be completed earlier, the suit asserts.

Tull said that he "hasn't heard anything specific" about an effort to try to enforce the law this year, but said "it's certainly a concern."

The attorney general's office "removed" the case to federal court shortly after it was filed. Afterward, Tull and attorney Christoph Keller asked to dismiss the case, saying they would file a new lawsuit in Pulaski County Circuit Court that didn't have federal claims, which they thought would prevent it from being moved to federal court. Tull said their aim was to have the case heard before Election Day.

Tull later filed a response saying he doesn't mind if the two cases are consolidated, as long as a judge can hold a hearing before Tuesday's election.

The attorney general's office is tasked with defending all state laws in court, but the office issued statements Friday saying that all absentee ballots validly cast "must be counted regardless of how long that process takes."