She’ll be fifth woman to serve as justice by Compiled by Democrat-Gazette Staff From Wire Reports | October 27, 2020 at 7:28 a.m. 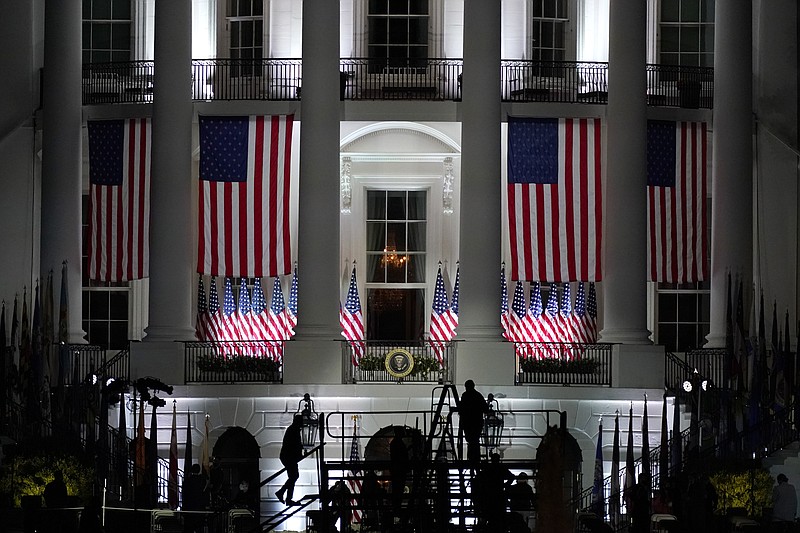 The White House stands ready for President Donald Trump to watch as Supreme Court Justice Clarence Thomas will administer the Constitutional Oath to Amy Coney Barrett on the South Lawn of the White House in Washington later tonight, Monday, Oct. 26, 2020, after Barrett is confirmed as expected by the Senate tonight. (AP Photo/Carolyn Kaster)

Barrett is the fifth woman elevated to the court in its 231-year history. The vote was 52-48.

Republicans hold a 53-47 advantage in the Senate, and only one Republican -- Sen. Susan Collins, who is in a tight reelection contest in Maine -- voted against the nominee. Collins said it was not over any direct assessment of Barrett, but rather that "I do not think it is fair nor consistent to have a Senate confirmation vote prior to the election."

[Video not showing up above? Click here to watch » https://www.youtube.com/watch?v=ECgNDFTRShU]

The move to fill the vacancy left by the late liberal icon Ruth Bader Ginsburg could open a new era of rulings on issues such as abortion, the Patient Protection and Affordable Care Act, and even Trump's own election. Democrats were unable to stop the outcome as Trump placed a third justice during his term.

Barrett is 48, and her lifetime appointment as the nation's 115th justice is expected to solidify the court's rightward tilt.

Barrett's high court confirmation is the closest ever to a presidential election, and it's the first in modern times to have no support from the minority party.

The covid-19 crisis has hung over the proceedings.

Vice President Mike Pence's office said Monday that he would not preside at the Senate session unless his tie-breaking vote was needed, after Democrats asked him to stay away when his aides tested positive for covid-19. As it turned out, Pence's vote was not necessary.

"This is a momentous day for America," Trump said at a swearing-in event on the South Lawn of the White House, before Justice Clarence Thomas administered the Constitutional Oath to Barrett before a crowd of about 200 people.

Barrett told those who were gathered that she believes "it is the job of a judge to resist her policy preferences." She vowed, "I will do my job without any fear or favor."

Barrett is expected to take the judicial oath administered by Chief Justice John Roberts in a private ceremony today at the court before she begins participating in proceedings.

"Voting to confirm this nominee should make every single senator proud," said Senate Majority Leader Mitch McConnell, in a speech fending off what he called "outlandish" criticism. During a rare weekend session, he declared that Barrett's opponents "won't be able to do much about this for a long time to come."

McConnell said of Barrett: "Her intellectual brilliance is unquestioned. Her command of the law is remarkable. Her integrity is above reproach."

Pence's presence in presiding over the vote would have been expected, but Senate Democratic leader Charles Schumer and his leadership team said it would not only violate virus guidelines of the Centers for Disease Control and Prevention, but that "it would also be a violation of common decency and courtesy."

Some GOP senators tested positive for the coronavirus after a Rose Garden event with Trump to announce Barrett's nomination last month, but they have since said they have been cleared by their doctors. Pence was not infected, and his office said the vice president tested negative for the virus Monday.

Underscoring the political divide during the pandemic, the Republican senators, most wearing masks, stayed in their seats, as is tradition for landmark votes, and applauded the outcome. Democratic senators were not present, heeding Schumer's advice not to linger in the chamber.

Democrats argued for weeks that the vote was being improperly rushed, and they insisted during an all-night Sunday session that it should be up to the winner of next Tuesday's election to name the nominee. However, Barrett, a federal appeals court judge from Indiana, is to be seated swiftly and to begin hearing cases.

Speaking near midnight Sunday, Sen. Elizabeth Warren, D-Mass., called the vote "illegitimate" and "the last gasp of a desperate party."

The Barrett confirmation has also fueled an internal Democratic debate over the issue of expanding the court, with the party's presidential nominee, former Vice President Joe Biden, under pressure from the party base to embrace a plan to increase the number of seats on the Supreme Court if he wins the White House.

Few elected Democratic officials have definitively supported the idea ahead of the closely contested elections for both the White House and the Senate. Biden has said he would appoint a bipartisan commission to propose changes to the Supreme Court and federal judiciary.

If Barrett follows the pattern of her colleagues, she will get to work immediately.

The court resumes oral arguments next Monday, and two of its biggest cases of the term are scheduled, including the challenge to the health care law.

A centerpiece of the Democrats' strategy against Barrett was the pending case on the fate of the Affordable Care Act, or Obamacare, set for oral arguments at the Supreme Court on Nov. 10. The Trump administration and Republican attorneys general argue that the entire 2010 health care law, including its protections for millions of Americans with preexisting medical conditions, should be invalidated.

And while the rest of the country is still counting votes Nov. 4, the court will take up a legal fight from Philadelphia, where city officials ended a contract with Catholic Social Services to provide foster care services because the agency said it would not accept applications from married same-sex couples. A lower court has agreed the city can enforce its anti-discrimination policy, which protects sexual orientation.

A broad ruling could decide when religious organizations deserve exemptions from anti-discrimination laws that the groups say would cause them to violate deeply held beliefs, such as what constitutes a marriage.

But Barrett will have work to do before then. The court will meet in private conference Friday -- most likely by teleconference -- to review cases that could still be added to this term's docket.

And there are four emergency requests pending at the court -- three involving election procedures in the battleground states of Wisconsin, North Carolina and Pennsylvania, plus a request from Trump that the court temporarily stop a subpoena from Manhattan District Attorney Cyrus Vance seeking the president's private financial records.

Trump has said he wanted to swiftly install a ninth justice to resolve election disputes and that he is hopeful the justices will end the health law.

During several days of public testimony before the Senate Judiciary Committee, Barrett was careful not to disclose how she would rule on any such cases.

She presented herself as a neutral arbiter and suggested, "It's not the law of Amy." But her writings against abortion and a ruling on the Affordable Care Act reflected conservatives' thinking.

Sen. Lindsey Graham, R-S.C., chairman of the Judiciary Committee, praised the mother of seven as a role model for conservative women. "This is historic," Graham said.

At the start of Trump's presidency, McConnell engineered a Senate rules change to allow confirmation by a majority of the 100 senators, rather than the 60-vote threshold traditionally needed to advance high court nominees over objections. That was an escalation of a rules change Democrats put in place to advance other court and administrative nominees under President Barack Obama.

Republicans took a political plunge by confirming the justice just days before the election, with the presidency and their Senate majority at stake.

Trump and his Republican allies had hoped for a campaign boost, in much the same way Trump generated excitement among conservatives and evangelical Christians in 2016 over a court vacancy. That year, McConnell refused to allow the Senate to consider Obama's choice to replace the late Justice Antonin Scalia, arguing the new president should decide.

Most other Republicans facing tough races embraced Barrett, who clerked for Scalia, to bolster their standing with conservatives. Sen. Thom Tillis, R-N.C., said in a speech Monday that Barrett will "go down in history as one of the great justices."

But it's not clear yet whether the effort to install the new justice over opposition in a heated election year will pay political rewards to the GOP.

Demonstrations for and against the nominee have been muted at the Capitol under coronavirus restrictions.

Democrats were unified against Barrett. While two Democratic senators voted to confirm Barrett in 2017 after Trump nominated the Notre Dame Law School professor to the appellate court, none voted to confirm her to the high court.

In a display of party priorities, Sen. Kamala Harris of California, the vice presidential nominee, returned to Washington from the campaign trail to join colleagues with a no vote.

​​​​​Information for this article was contributed by Lisa Mascaro, Mary Clare Jalonick, Andrew Taylor, Mark Sherman, Zeke Miller, Aamer Madhani and Kathleen Ronayne of The Associated Press; and by Seung Min Kim and Robert Barnes of The Washington Post. 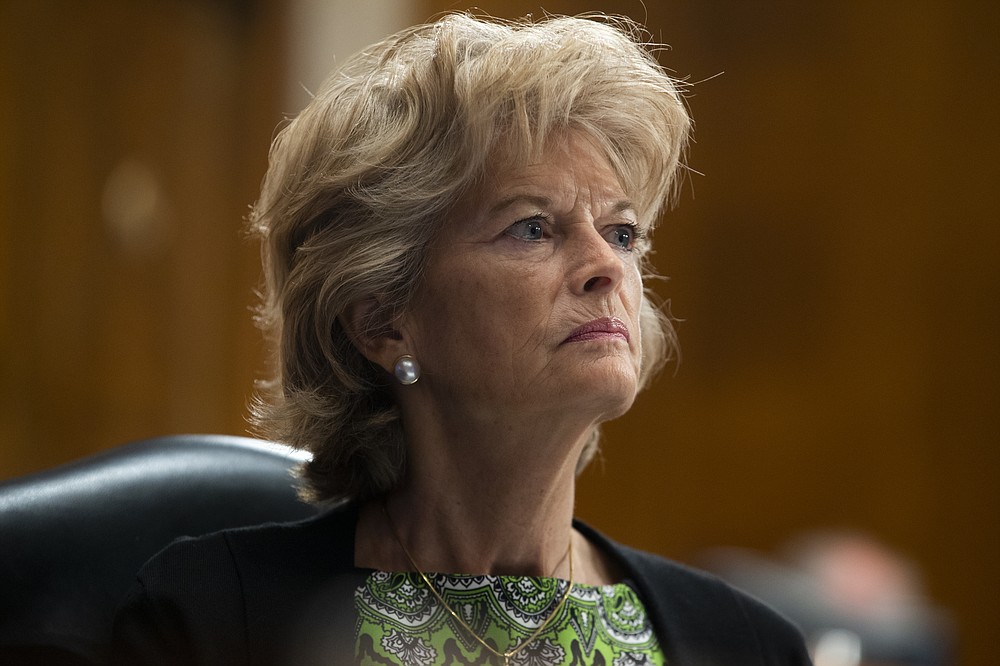 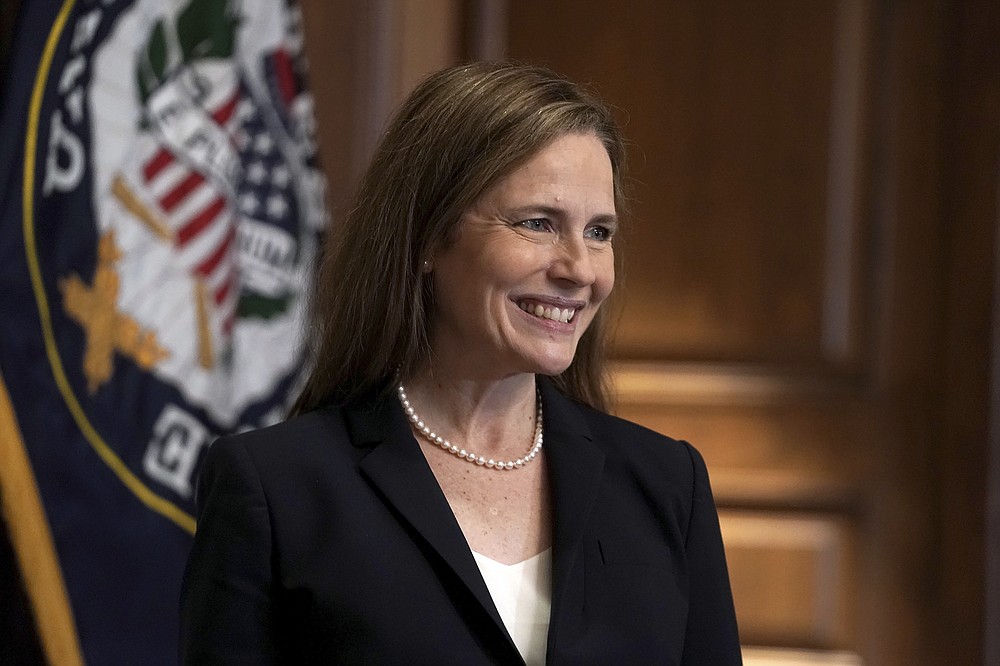 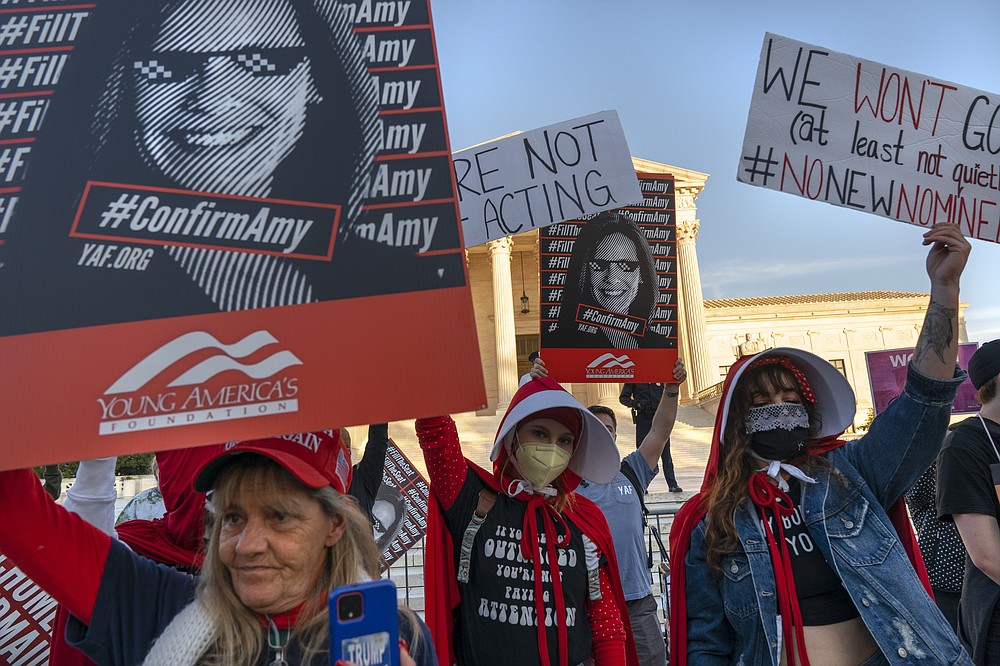 Jennifer Friend of Gainesville, Fla., left, rallies in favor of the nomination of Amy Coney Barrett to the Supreme Court, next to Sydney Hopfer, and Deidra Hubay, right, both of Pittsburgh, who oppose it, outside the Supreme Court, Monday, Oct. 26, 2020, on Capitol Hill in Washington. (AP Photo/Jacquelyn Martin) 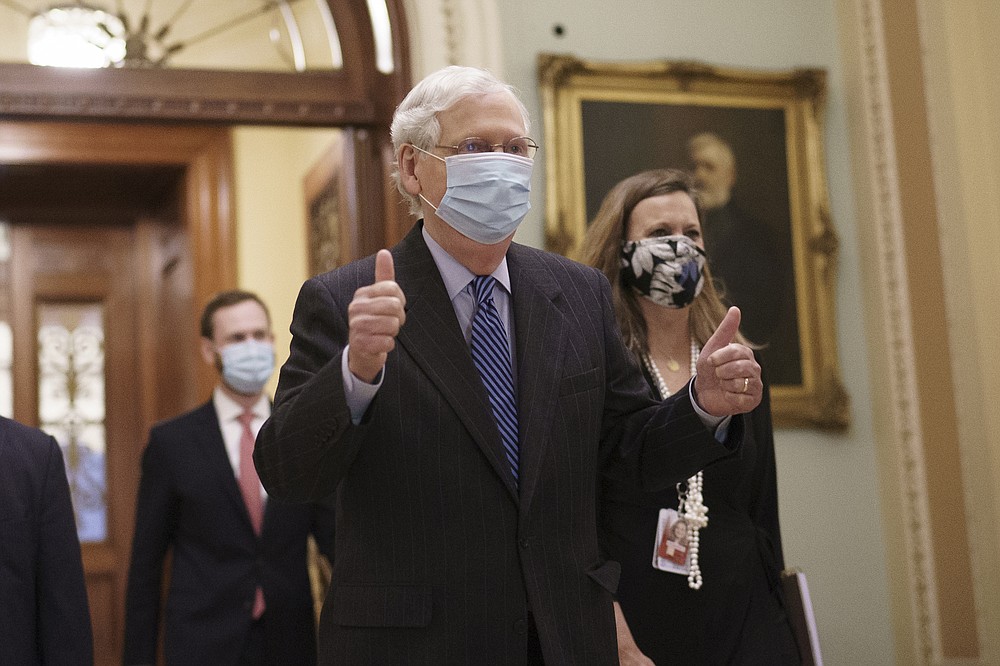 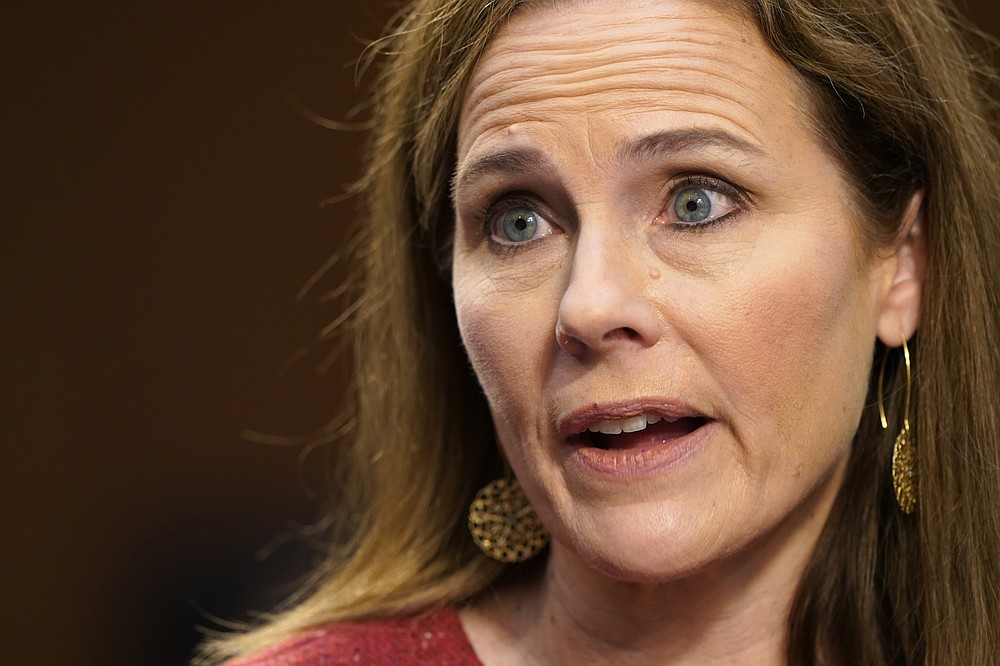 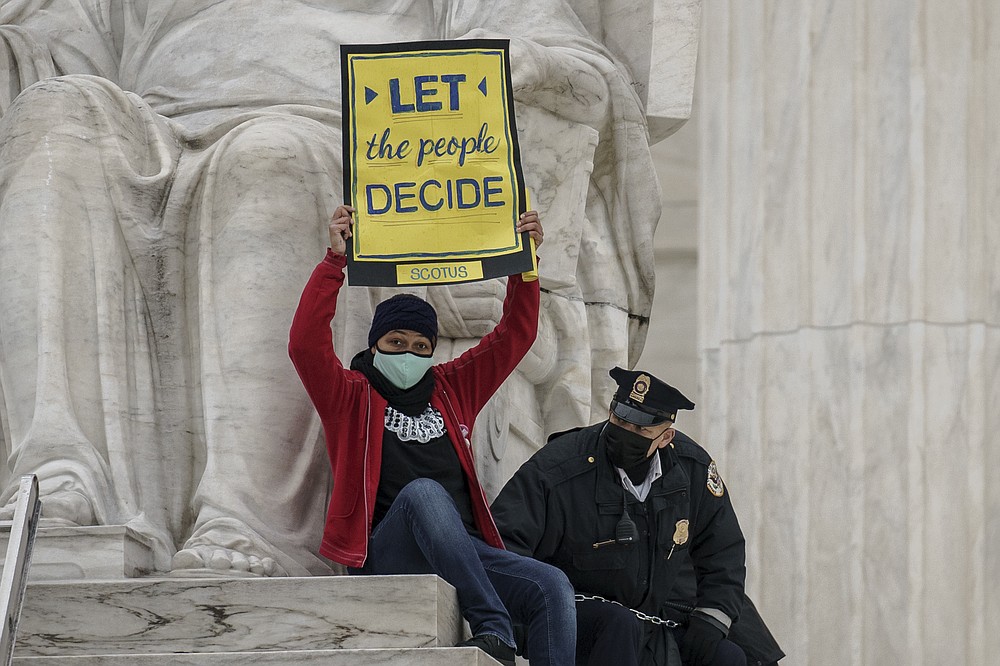 A protester opposed to the Senate's race to confirm Amy Coney Barrett is removed by police after chaining themselves to a railing and holding a sign while sitting atop the statue Contemplation of Justice, at the Supreme Court building in Washington, Sunday, Oct. 25, 2020. (AP Photo/J. Scott Applewhite) 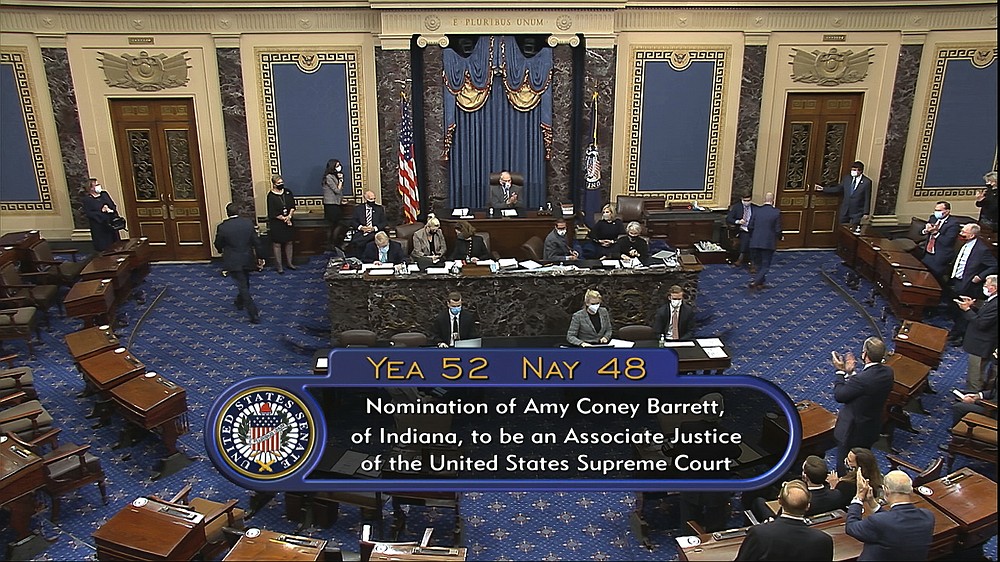 In this image from video, the vote total in the U.S. Senate on the confirmation of Amy Coney Barrett to become a Supreme Court justice at the U.S. Capitol in Washington, Monday, Oct. 26, 2020. (Senate Television via AP) 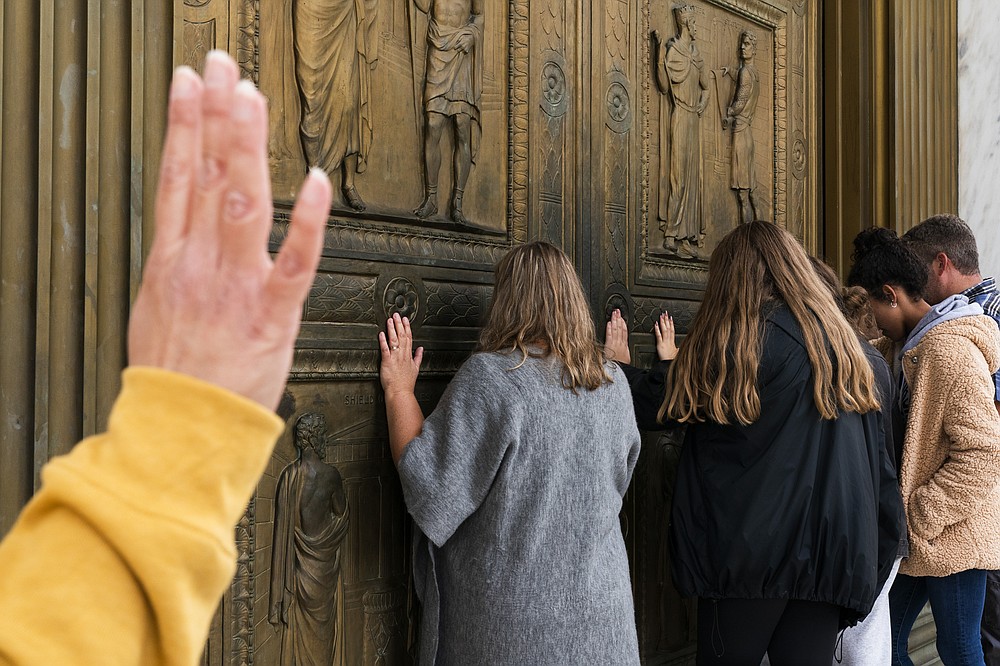 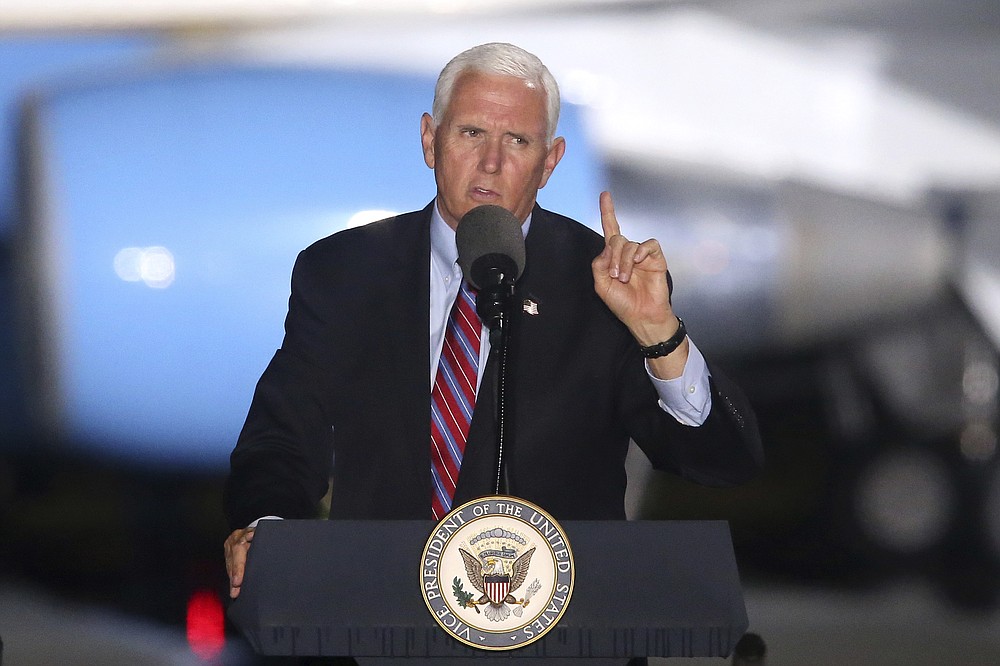