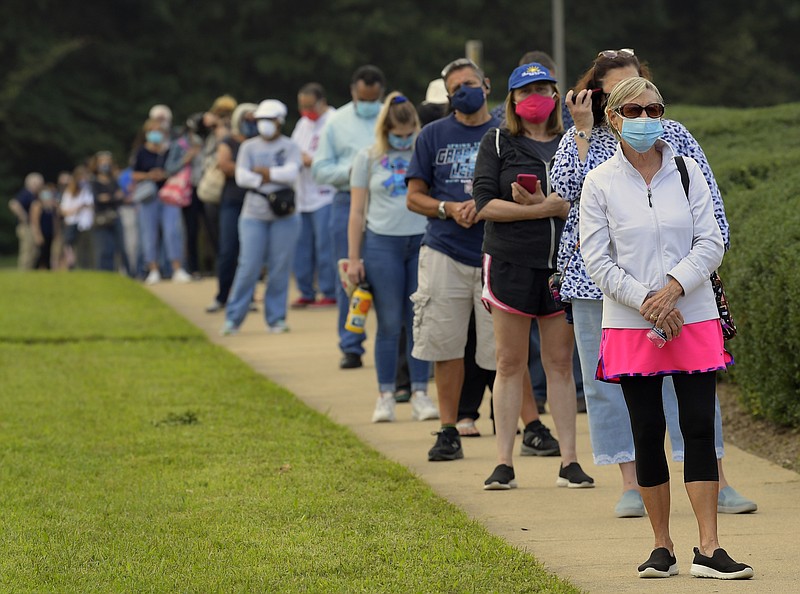 Voters in Virginia wait in a long line to cast their ballots at the Fairfax County Government Center for the November presidential election on first day of early voting in that state on Sept. 18. MUST CREDIT: Washington Post photo by John McDonnell.

After weeks of early and mail voting, at least 69 million Americans have already cast their ballots for next week's election.

The huge number, which includes voters who have cast ballots either in person or by mail, has stunned election officials and campaign operatives. It equals roughly half of the total turnout in 2016.

For now, the early numbers favor Democrats in 16 of 19 states that provide such data. But the gap between Democratic and Republican voters has narrowed in recent days in several battleground states, and the campaigns of President Donald Trump and former Vice President Joe Biden noted that more Republicans are expected to vote on Nov. 3, Election Day, than Democrats, according to numerous polls.

"The early vote is showing two things: We're clearly headed to record-level turnout, nationally and likely in just about every state," said Tom Bonier, the head of TargetSmart, a Democratic data firm. "And it's clearly showing us that Democrats are highly engaged and will be themselves setting record levels of turnout."

Bonier emphasized that Republicans are also motivated to vote. "The open question," he said, "is whether that level of Republican engagement and enthusiasm can match or exceed [that of] Democrats. That's the part of the equation that we can't solve until Election Day."

Meanwhile, for millions of voters who considered using the Postal Service to cast their ballot, it's time to find a backup plan, election administration and postal experts say.

Mail service continues to lag, especially in certain swing states. Nationally, only 85.6% of all first-class mail was delivered on time the week of Oct. 16; that's the 14th consecutive week the on-time rate sat below 90% for mail that should reach its destination within three days.

Biden's campaign internally switched its language to voters this week, encouraging them to submit ballots in person or at a secure drop box, according to campaign officials, rather than through the mail.

Even the postcard the Postal Service sent to every American household in September advises voters to "mail your ballot at least 7 days before Election Day."

[Video not showing up above? Click here to watch » https://www.youtube.com/watch?v=_O0iU5u9WcY]

"If you haven't requested a mail ballot yet, it's too late," said David Becker, executive director at the nonprofit, nonpartisan Center for Election Innovation & Research. "I don't care about the legal deadline; it's just too late in terms of getting it process, getting it mailed to you and you being able to fill it out and return it. You're just putting too much pressure on yourself. At this point, if you haven't requested a mail ballot yet, plan to vote in person and vote early, if possible."

Voters who requested but have yet to receive a mail ballot should vote in person, Becker said. They may be required to fill out a provisional ballot, but it will count as long as they do not also submit a mailed ballot. Voters who have received their mail ballot, but have not turned it in yet should do so in-person or at a ballot drop box.

In an emailed statement, Postal Service chief retail and delivery officer Kristin Seaver said advancing election mail, including ballots, was the agency's "number one priority now through the election."

Separately, delivery delays during an election can't be unlawful, because the Constitution doesn't guarantee states any particular level of service when it comes to mail-in ballots, the Postal Service told a federal judge Tuesday.

Postmaster General Louis DeJoy and the president are seeking dismissal of a lawsuit brought by New York and other states that claim disruptive changes at the Postal Service over the summer are violating the Elections Clause of the Constitution by putting election mail at risk.

The Justice Department argued in a court filing Tuesday in Washington that the clause can't restrict the government from carrying out operational changes or other activity that "may have an incidental impact" on voting.

The states' theory "assumes that because the plaintiff states crafted their election laws with the expectation that USPS will provide a certain level of service, they now have a constitutional right to expect that level of service," the U.S. said. The clause "does not shield states from any and all external circumstances that may impact state elections."

The U.S. said in the filing that state lawmakers can change the rules for accepting ballots if they're worried about delivery delays, although Republican legislatures have largely resisted such efforts.

"The states remain free to alter their policies to account for any fears over the performance of USPS," it said.

The Postal Service also blasted the states for suggesting that Trump's negative comments about mail-in voting had anything to do with the changes put in place by DeJoy, a longtime Republican donor with no previous USPS experience.

The states "submit no evidence connecting these statements to the alleged USPS policy changes at issue," it said. "Indeed, they do not cite to a single piece of evidence in the record suggesting that any of these alleged policy changes took place at the behest of the President." 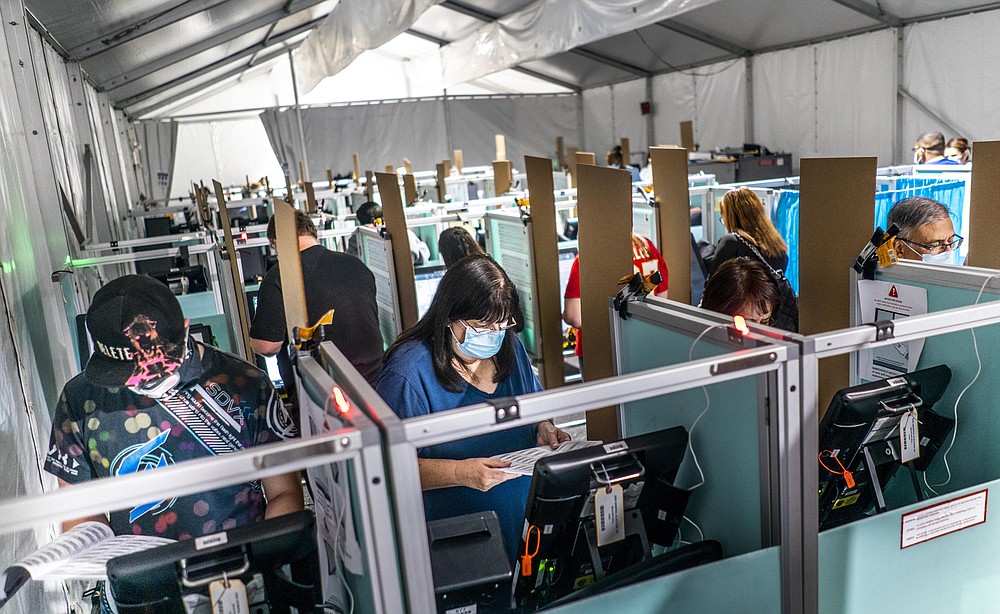