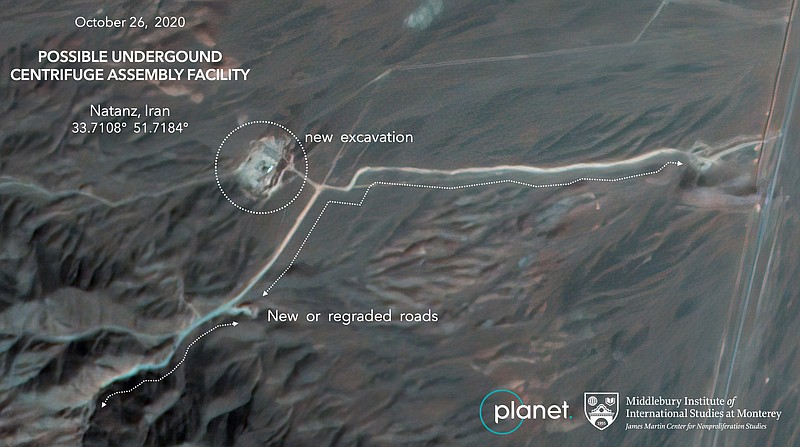 This Monday, Oct. 26, 2020, satellite image from Planet Labs Inc. that has been annotated by experts at the James Martin Center for Nonproliferation Studies at Middlebury Institute of International Studies shows construction at Iran's Natanz uranium-enrichment facility that experts believe may be a new, underground centrifuge assembly plant. Satellite photos show Iran has begun construction at its Natanz nuclear facility. That's after the head of the U.N.’s nuclear agency acknowledged Tehran is building an underground advanced centrifuge assembly plant after its last one exploded in a reported sabotage attack last summer. (Planet Labs Inc. via AP)

Since August, Iran has built a new or regraded road to the south of Natanz toward what analysts believe is a former firing range for security forces at the enrichment facility, images from San Francisco-based Planet Labs Inc. show.

A Planet Labs satellite image Monday shows the site cleared away with what appears to be construction equipment there, while an Oct. 21 image from Maxar Technologies shows trucks, cars, backhoes and other vehicles at the cleared site.

Analysts from the James Martin Center for Nonproliferation Studies at the Middlebury Institute of International Studies say they believe the site is undergoing excavation.

Rafael Grossi, the director-general of the International Atomic Energy Agency, told The Associated Press on Tuesday that his inspectors were aware of the construction. He said Iran had previously informed agency inspectors, who continue to have access to Iran's sites despite the country having moved away from many limits of its 2015 nuclear deal with world powers, known as the Joint Comprehensive Plan of Action, or JCPOA.

"They have started, but it's not completed. It's a long process," Grossi said.

Alireza Miryousefi, a spokesman for the Iranian mission to the United Nations, would not comment on the satellite images or discuss specifics of the construction, but said Iran was being transparent with its actions.

"Nothing in Iran regarding its peaceful nuclear program is being done in secret, in full keeping with the JCPOA, and as the IAEA has repeatedly confirmed," Miryousefi said in an email.

"This instance is no different," he said.

Ali Akbar Salehi, the head of the Atomic Energy Organization of Iran, last month told state television the destroyed above-ground facility was being replaced with one "in the heart of the mountains around Natanz."

Iran now enriches uranium to up to 4.5% purity, and according to the last atomic energy agency report, had a stockpile of 2.32 tons. Experts typically say 1.15 tons of low-enriched uranium is enough material to be enriched up to weapons-grade levels of 90% purity for one nuclear weapon.

Grossi told The Associated Press, however, that the International Atomic Energy Agency's current estimate is that Iran does not yet have enough to produce a weapon.

Iran's so-called "breakout time" -- the time needed for it to build one nuclear weapon if it chose to do so -- is estimated now by outside experts to have dropped from one year under the deal to as little as three months. Iran maintains its nuclear program is for peaceful purposes, though Western countries, as well as Israel, fear Tehran could use it to pursue atomic weapons.

Natanz, built underground to harden it against airstrikes, long has been at the center of those fears since its discovery in 2002. Centrifuges there still spin in vast halls under 25 feet of concrete. Air defense positions surround the facility in Iran's central Isfahan province.

Despite being one of the most-secure sites in Iran, Natanz was targeted by the Stuxnet computer virus -- believed to be the creation of the U.S. and Israel -- before the 2015 nuclear deal.

In July, a fire and explosion struck its advanced centrifuge assembly facility in an incident Iran later described as sabotage. Suspicion has fallen on Israel, despite a claim of responsibility by a previously unheard-of group.

There have been tensions with the International Atomic Energy Agency and Iran even at Natanz, with Tehran accusing one inspector of testing positive for explosives last year. Inspectors so far, however, have been able to maintain their surveillance, something Lewis described as very important.

"As long as they declared to the IAEA in the proper time frame, there's no prohibition on putting things underground," he said. "For me, the real red line would be if the Iranians started to stonewall the IAEA."

Information for this article was contributed by David Rising of The Associated Press. 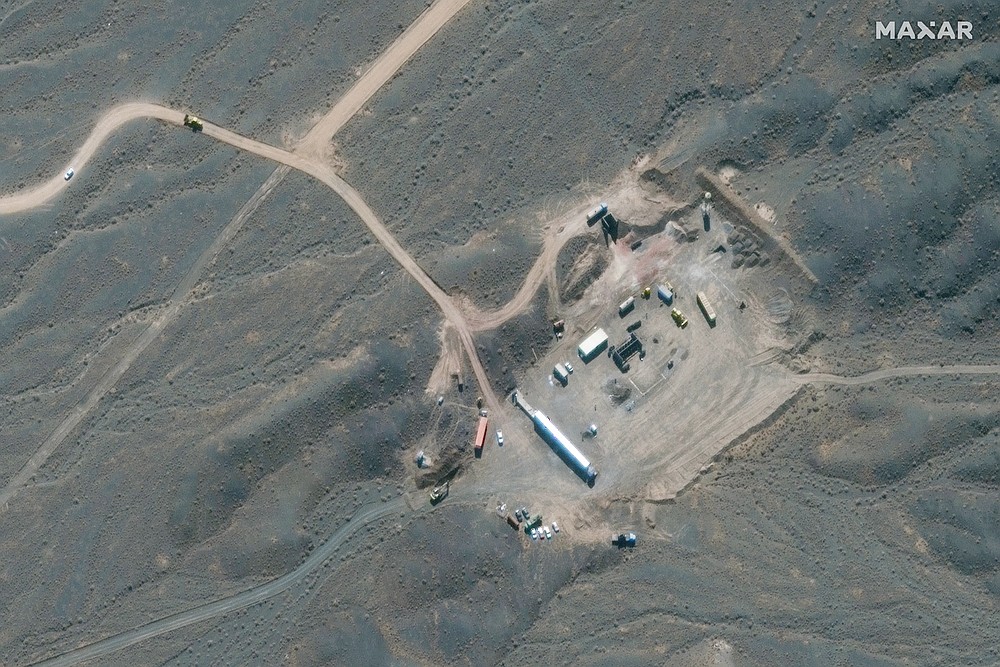