Decision to allow logging, road building in pristine area by Compiled by Democrat-Gazette Staff From Wire Reports | October 29, 2020 at 2:06 a.m. 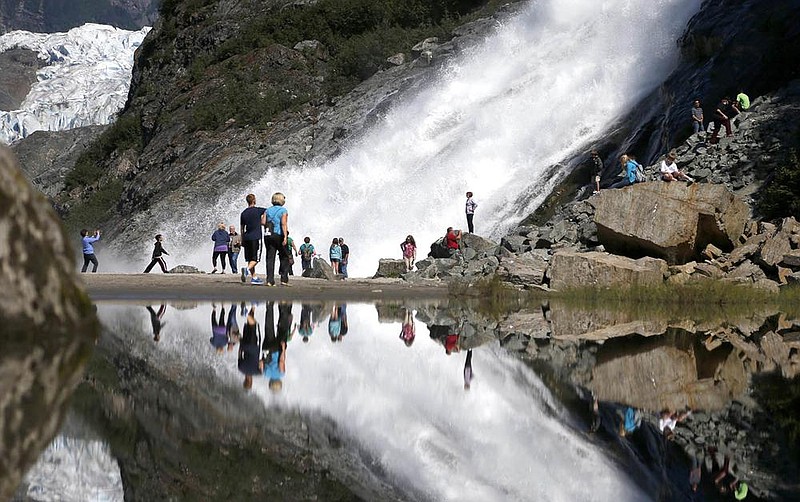 Tourists in this file photo visit the Mendenhall Glacier in the Tongass National Forest as they make their way to Nugget Falls in Juneau, Alaska. The U.S. Forest Service plans to lift restrictions on road building and logging in the national forest. (AP/Charles Rex Arbogast)

JUNEAU, Alaska -- The federal government announced plans Wednesday to lift restrictions on logging and building roads in a pristine rain forest in Alaska that provides habitat for wolves, bears and salmon. Conservation groups vowed to fight the decision.

The U.S. Department of Agriculture said it has decided to exempt the Tongass National Forest, the country's largest national forest, from the so-called roadless rule, protections that ban road construction and timber harvests with limited exceptions. It applies to nearly one-quarter of all U.S. Forest Service lands.

The rule, dating to 2001, has long been a focus of litigation.

Alaska in 2018, under then-Gov. Bill Walker, asked the federal government to consider the exemption, a decision supported by current Republican Gov. Mike Dunleavy. Members of Alaska's congressional delegation also have pushed for the exemption.

About 9.4 million of Tongass' 16.7 million acres are considered roadless areas, according to the Forest Service, which falls under the USDA. That number differs slightly from the 9.2 million acres the agency cited in its draft environmental review last fall. The majority of Tongass is in a natural condition, and the forest is one of the largest, relatively intact temperate rain forests in the world, the agency said.

The decision, which will be published in the Federal Register, reverses protections President Bill Clinton put in place in 2001 and is one of the most sweeping public lands rollbacks Trump has enacted.

As of today, it will be legal for logging companies to build roads and cut and remove timber in the roadless areas -- featuring old-growth stands of red and yellow cedar, Sitka spruce and Western hemlock. The relatively-pristine expanse is also home to many salmon runs and imposing fjords.

The new rule states that it will make "an additional 188,000 forested acres available for timber harvest," mainly "old growth timber."

Many of the roadless areas are wildlife habitats, ecosystems and natural areas like old-growth temperate rain forests, ice fields and glaciers, and islands facing the open Pacific Ocean "that exist nowhere else in the National Forest system," according to the Forest Service.

The USDA, in a notice released Wednesday, said it concluded that a policy change for Tongass "can be made without major adverse impacts to the recreation, tourism, and fishing industries, while providing benefits to the timber and mining industries, increasing opportunities for community infrastructure, and eliminating unnecessary regulations."

In a separate statement, the USDA said the exemption itself doesn't authorize any specific work and that proposed projects still must comply with the forest's management plan and are subject to federal environmental review.

U.S. Sen. Lisa Murkowski, an Alaska Republican, said on social media that a full exemption from the roadless rule is about access "to recreation, renewable energy and more while ensuring good stewardship of our lands and waters."

Conservation groups criticized the decision as short-sighted and driven by politics.

"The decision to roll back the roadless rule on the Tongass was made in spite of, not in support of, southeast Alaskans and our communities," said Meredith Trainor, executive director of the Southeast Alaska Conservation Council. "In making this decision, the Trump administration and the sham rule-making process they undertook in our region ignored economic realities, environmental imperatives, and worst of all, the will of the people who actually live here."

Randi Spivak, public lands director at the Center for Biological Diversity, referred to the forest's old-growth trees as giants.

"As sure as the sun rises in the east, with our allies, we will sue to keep these magnificent giants standing for centuries to come," Spivak said.

Dunleavy and Republican U.S. Sen. Dan Sullivan, who is locked in a tight reelection race, lobbied the president to exempt the state from the roadless rule on the grounds that it could help the economy in Alaska's southeast. Fishing and tourism account for 26% of regional employment, according to the Southeast Conference, a regional business group, compared with timber's 1%.

For years, federal and academic scientists have identified Tongass as an ecological oasis that serves as a large carbon sink while providing key habitat for wild Pacific salmon and trout, Sitka black-tailed deer and myriad other species.

It boasts the highest density of brown bears in North America, and its trees -- some of which are between 300 and 1,000 years old -- absorb at least 8% of all the carbon stored in the entire Lower 48 states' forests combined.

"While tropical rain forests are the lungs of the planet, the Tongass is the lungs of North America," Dominick DellaSala, chief scientist with the Earth Island Institute's Wild Heritage project, said in an interview. "It's America's last climate sanctuary."

Information for this article was contributed by Becky Bohrer of The Associated Press, and by Juliet Eilperin of The Washington Post. 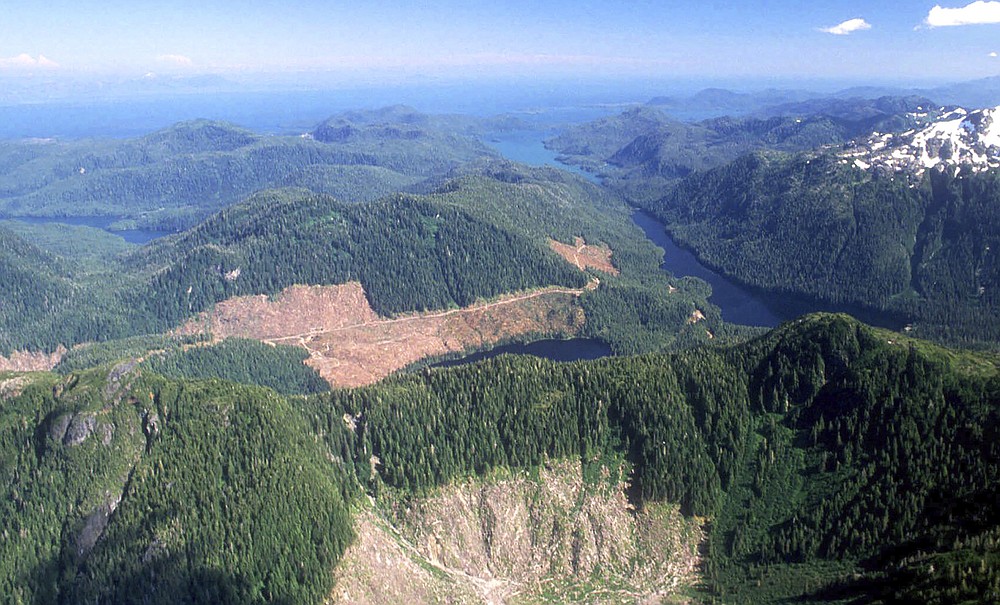 FILE - This 1990 aerial file photo, shows a section of the Tongass National Forest in Alaska that has patches of bare land where clear-cutting has occurred. The U.S. Forest Service announced plans Wednesday, Oct. 28, 2020, to lift restrictions on road building and logging in Tongass National Forest, a largely pristine rainforest in southeast Alaska that provides habitat for wolves, bears and salmon. Conservation groups vowed to fight the decision. (Hall Anderson/Ketchikan Daily News via AP, File)
ADVERTISEMENT