Europeans ‘overpowered by second wave,’ revive lockdowns, other curbs by Compiled by Democrat-Gazette Staff From Wire Reports | October 29, 2020 at 7:20 a.m. 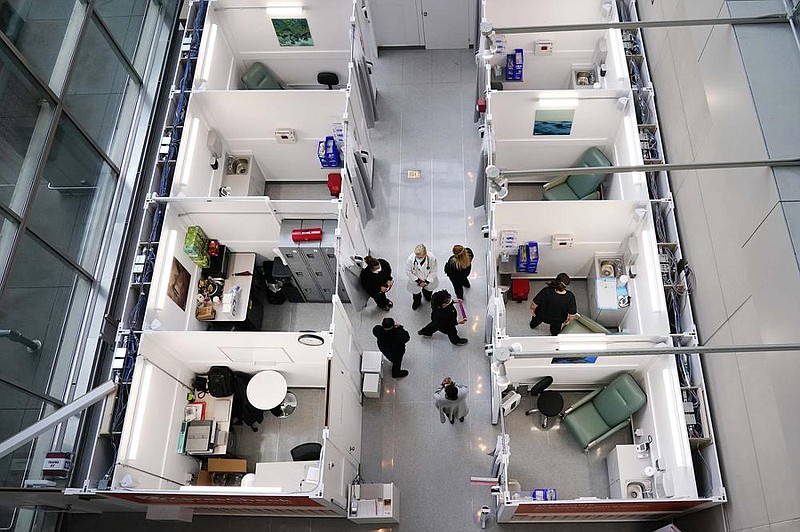 Medical personnel gather at an express coronavirus testing facility Wednesday at Boston Logan International Airport. The testing site is open for airport and airline employees, and will open to passengers and the general public in mid-November. More photos at arkansasonline.com/1029covid/. (AP/Elise Amendola)

A new wave of lockdowns and business closings swept across France, Germany and other places in Europe on Wednesday as surging coronavirus infections there and in the U.S. threaten months of progress against the scourge on two continents.

The United States reported a record of more than 500,000 new coronavirus cases over the past week, as states and cities resorted to stricter measures to contain the virus that is spreading across the country, especially the American heartland.

The record, broken Tuesday, reflects how quickly the virus is spreading. It took nearly three months for the first 500,000 coronavirus cases to be tallied in the United States -- the first was confirmed Jan. 21, and the country did not reach the half-million mark until April 11. Testing was limited in the early days of the pandemic.

The resurgence and the resulting clampdown sent a shudder through Wall Street. The S&P 500 fell 3.5%, its biggest drop since June, and the Dow Jones Industrial Average lost 943 points, or 3.4%.

French President Emmanuel Macron declared a new nationwide lockdown starting Friday, saying his country has been "overpowered by a second wave." Many doctors had urged the move, given that 58% of the nation's intensive care units are now taken up with covid-19 patients.

In Germany, Chancellor Angela Merkel announced a four-week shutdown of bars, restaurants and theaters. "We must act, and now, to avoid an acute national health emergency," she said.

Countries such as Switzerland, Italy, Bulgaria and Greece have closed or otherwise clamped down again on nightspots and imposed other restrictions such as curfews and mandatory mask-wearing. Madrid and other parts of Spain banned all but essential travel in and out of their regions.

[Video not showing up above? Click here to watch » https://www.youtube.com/watch?v=W8jvi0MqKE0]

The World Health Organization says the European region -- which includes Russia, Turkey, Israel and Central Asia, according to its definition -- accounted for almost half of the 2.8 million new coronavirus cases reported globally last week.

"We are deep in the second wave," European Commission President Ursula von der Leyen said. "I think that this year's Christmas will be a different Christmas."

In the U.S., where practically every state is seeing a rise in cases, Democratic Gov. Tony Evers of hard-hit Wisconsin has been pleading with people to stay home, after an order he issued in the spring was overturned by the courts.

Illinois Gov. J.B. Pritzker banned indoor dining and drinking in Chicago this week. Chicago is averaging more than twice the coronavirus-related hospital admissions per day that it was a month ago, Pritzker's office said, and the share of tests that are coming back positive has almost doubled since the beginning of October.

The virus has killed more than 250,000 people in Europe and more than 227,000 in the U.S., according to the count kept by Johns Hopkins University.

The long-feared surge is blamed in part on growing disregard for social distancing and mask-wearing, as well as the onset of cold weather, which is forcing people indoors, where the virus can spread more easily.

Dr. David Letzer, an infectious-disease specialist who doubles as chairman of the Wisconsin Medical Society's covid-19 task force, is getting swamped with patients. He said he was incensed to see people without masks going into a restaurant as he was driving between hospitals.

"I'm just coming from a place with ventilators, and people are just going to an indoor restaurant," he said. "Those are the things that are frustrating and take their toll."

Wisconsin, one of the worst hot spots in the nation, set records Tuesday for the number of daily infections at nearly 5,300 and deaths with 64. About 12% of the state's intensive care beds were available Tuesday, according to the Wisconsin Hospital Association.

"It is absolutely exhausting right now," said Dr. Jeff Pothof, chief quality officer at UW Health, the University of Wisconsin-Madison's hospital and medical arm. Nearly a third of its covid-19 patients are in intensive care, filling all three wings of the ICU, he said. Some require one-on-one care around the clock.

In the Northeast, where virus cases seemed to have been under control over the summer, Rhode Island Gov. Gina Raimondo said the state is seeing record numbers of new infections and might have to revive business restrictions that were loosened months ago.

"We're in a bad place. This data is not encouraging. It's headed in the wrong direction in every metric," she said.

After a lethal spring, Europe seemed to have beaten back the virus over the summer.

But more than 2 million new confirmed coronavirus cases have been reported globally in the past week, the shortest time ever for such an increase, and 46% of those were in Europe.

Italy and Germany set records for new infections Wednesday, with Italy reporting nearly 25,000 in a single day and Germany logging almost 15,000. France, Belgium, the Netherlands, most of Spain and the Czech Republic are also seeing rising rates of infection.

Deaths are also on the rise in Europe, with about a 35% spike from the previous week, the World Health Organization said. France reported 523 virus-related deaths in 24 hours Tuesday, the highest daily count since April.

France has been "overpowered by a second wave," Macron said in a national televised address Wednesday. "Nothing is more important than human life."

"We're dealing with the coronavirus -- the virus itself -- and also corona fatigue," she said. "That is, people are becoming more and more fed up with the preventive measures."

In Italy, where the Lombardy and Campania regions are hardest hit, officials have accused right-wing extremists, soccer hooligans and anarchists of using widespread discontent over new anti-virus restrictions on restaurants, gyms, pools and theaters as a pretext to wage "urban guerrilla" violence during recent protests.

Talk of new lockdowns also prompted unrest in Germany, where thousands of people staged a protest at Berlin's Brandenburg Gate to demand more financial support from the government.

Restaurants will still be allowed to serve take-out food. Shops and schools are to remain open, unlike during Germany's shutdown during the first phase of the pandemic.

Merkel had pressed governors of the country's states to quickly agree upon a partial lockdown. After they authorized the move, the chancellor appealed to people not to make unnecessary journeys and said hotels won't be able to accommodate people on tourist trips.

Even Sweden, which avoided a national lockdown and generally imposed far lighter measures than other European countries, is now urging people to avoid stores and public transportation.

In Britain, the government is under pressure to develop a national strategy as scientists warn that the number of people hospitalized with the disease in the U.K. could almost triple by the end of next month.

Mark Walport, a former chief scientific officer, said Britain only needs to look across the English Channel to see what's coming. Britain's current measures are similar to those in France and Spain.

"With our current measures ... there's little evidence that there is as much social distancing as there was when we clamped down on the first wave, and so we know that the risk is significant that cases will continue to grow," Walport told the BBC.

Meanwhile in Australia, according to the Victoria state government, the lockdown was largely lifted Wednesday after 111 days. The changes will allow 6,200 retail stores, 5,800 cafes and restaurants, 1,000 beauty salons and 800 pubs to reopen, affecting 180,000 jobs.

Crowds on the city's streets -- where mask-wearing remains compulsory -- were still thin Wednesday since Melbourne residents are still restricted to traveling no more than 16 miles from home and most of the city's office blocks remain empty as work-from-home orders continue.

And in the Mideast, Iran's parliament speaker said he has tested positive for the coronavirus, joining a growing list of infected Iranian officials as the country again shattered its single-day death record with 415 new fatalities reported Wednesday.

Mohammad Bagher Ghalibaf tweeted that he received the news after one of his colleagues tested positive for the virus. He said he would continue to carry out his duties from self-quarantine.

Separately, drugmakers Sanofi and GlaxoSmithKline have agreed to provide 200 million doses of their potential covid-19 vaccine to the COVAX Facility, a collaboration designed to give countries around the world equal access to coronavirus vaccines.

The Sanofi-GSK vaccine candidate is in early stage trials, with results expected in early December. The drugmakers said Wednesday that they plan to begin phase three trials by the end of the year and request regulatory approval of the vaccine in the first half of 2021.

The facility is part of COVAX, a coalition of governments, health organizations, businesses and charities working to accelerate the development of covid-19 vaccines.

Almost 44 million people have been confirmed to be infected with the virus worldwide, and 1.16 million of them have died, according to a tally by Johns Hopkins University. 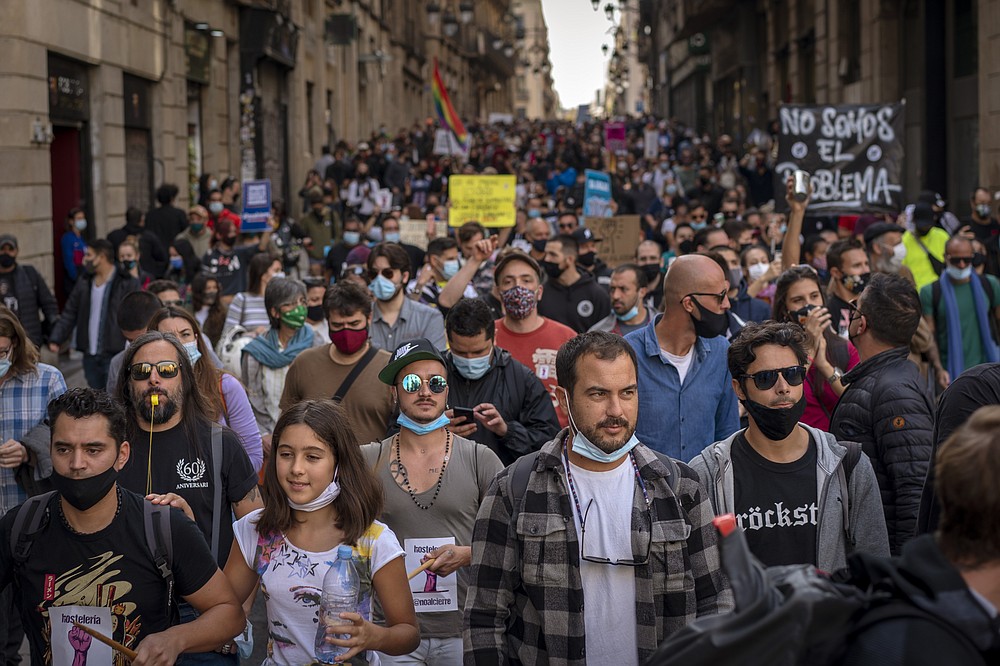 Workers of several sectors including restaurants, bars, hotel, taxi, and nightclubs march during a protest against the latest virus restrictions in Barcelona, Spain, Wednesday, Oct. 28, 2020. Since Oct. 14 bars and restaurants have been closed, allowed to serve food and drink for take-away and delivery only. On Sunday a curfew from 10p.m. to 6 a.m. was imposed. Still, virus cases are surging and Catalan authorities are now considering even more restrictions including weekend lockdowns. Banner reads in Spanish "we want to work". (AP Photo/Emilio Morenatti) 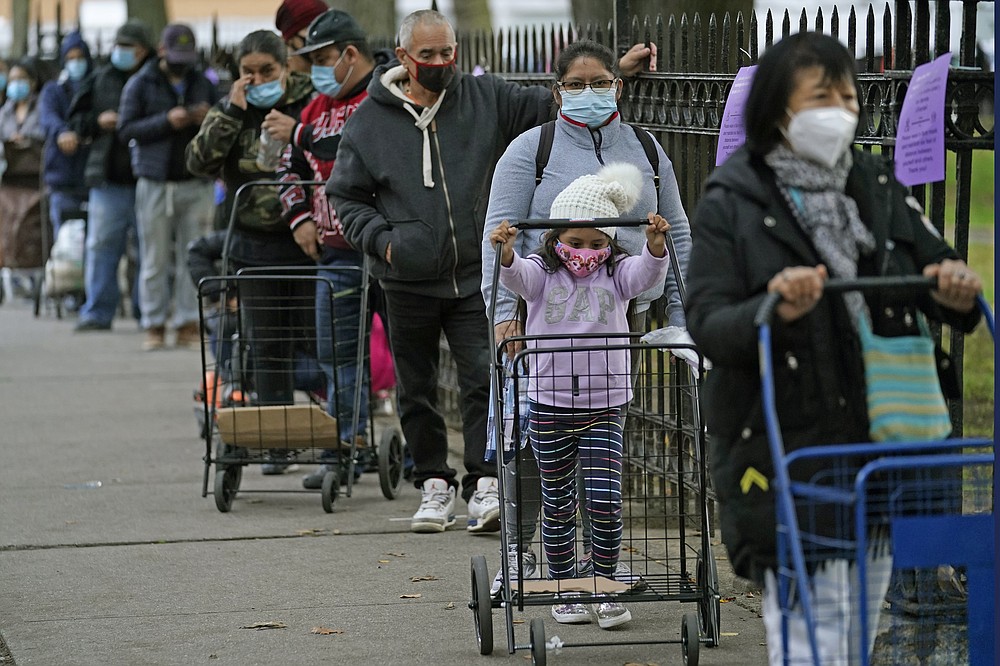 A child rolls a grocery cart as she and residents of the Corona neighborhood of the Queens borough of New York wait in line to receive donated food, Tuesday, Oct. 27, 2020. Rep. Alexandria Ocasio-Cortez, D-N.Y., joined other politicians and representatives of Make the Road NY, a Queens-based community organization, to hand out food in the area, which was hit hard by the coronavirus. (AP Photo/Kathy Willens) 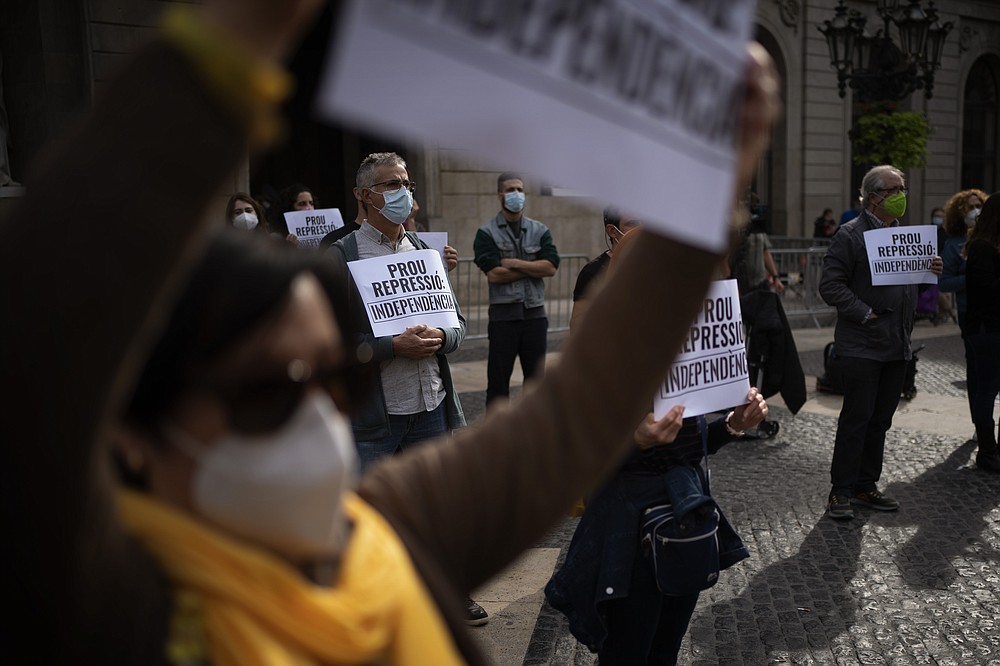 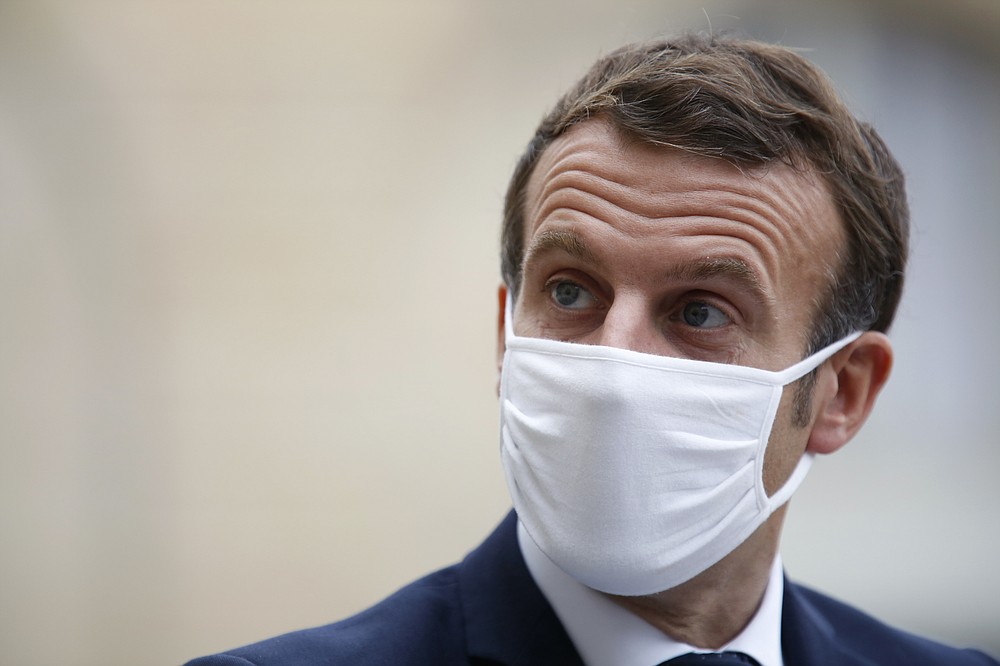 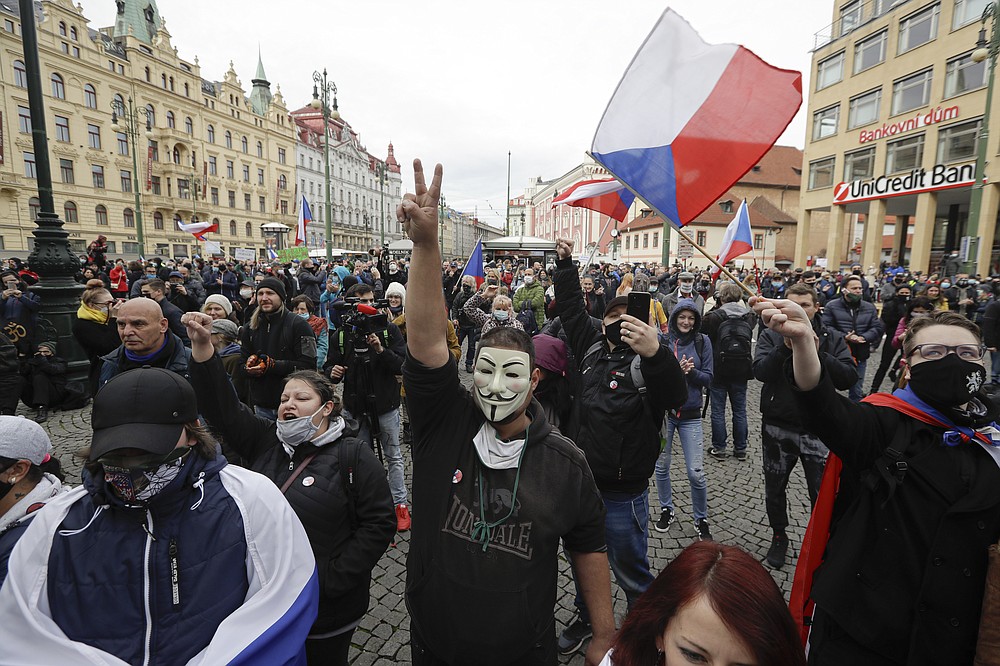 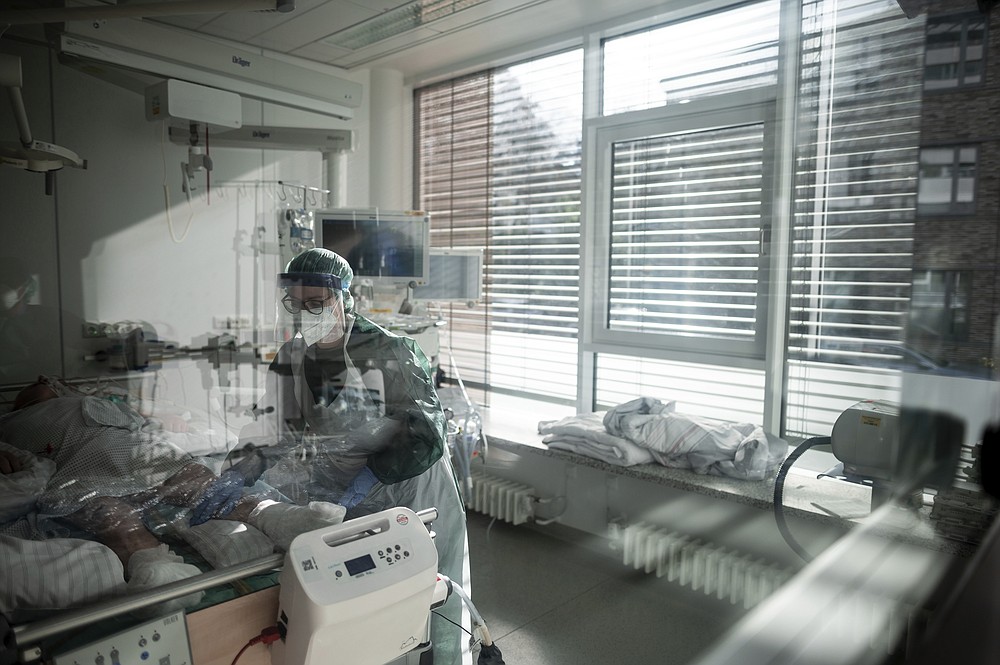 Nursing staff in protective equipment cares for a corona patient in a hospital in Essen, Germany, Wednesday, Oct. 28, 2020. People with a new coronavirus infection are treated in the intensive care unit IT2 in the Operative Centre II of the University Hospital Essen. (Fabian Strauch/dpa via AP) 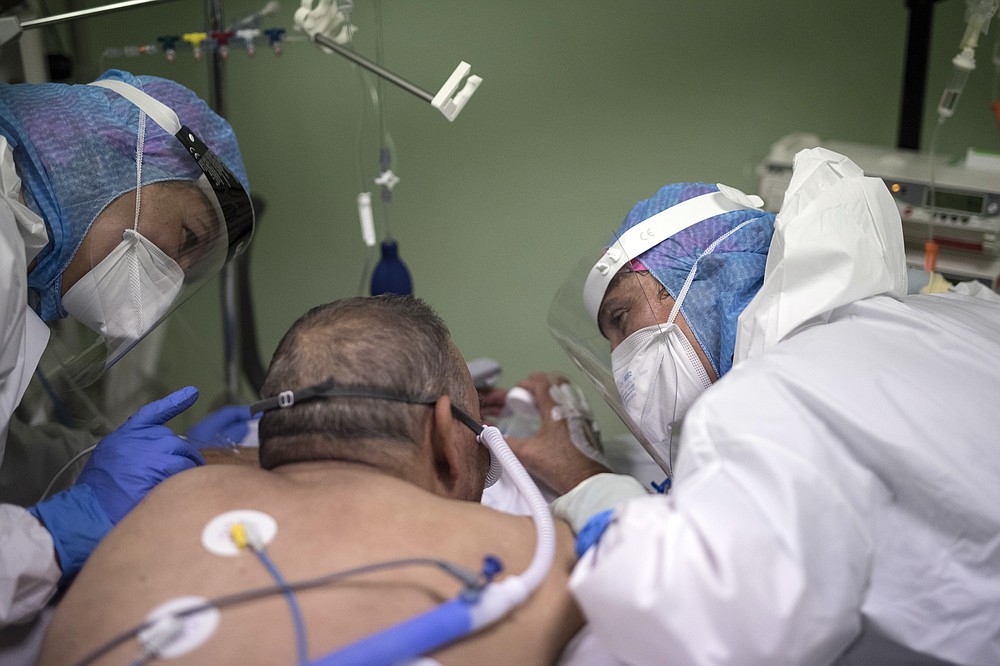 Nurses comfort a COVID-19 patient in the intensive care unit at the Joseph Imbert Hospital Center in Arles, southern France, Wednesday, Oct. 28, 2020. Many French doctors are urging a new nationwide lockdown, noting that 58% of the country's intensive care units are now occupied by COVID patients and medical staff are under increasing strain. (AP Photo/Daniel Cole) 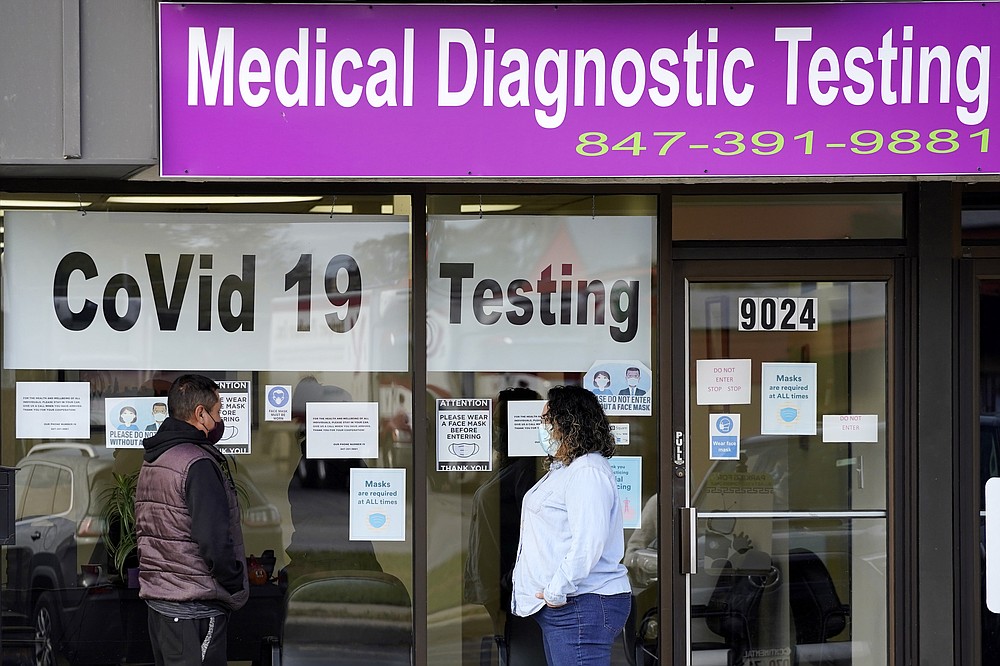 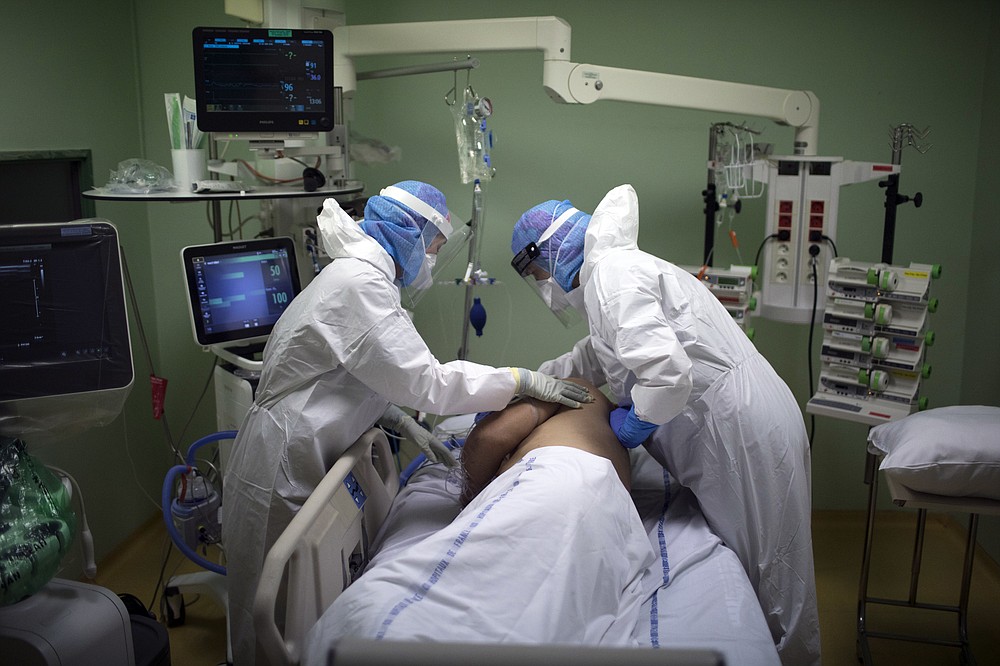 A medical crew treat a COVID-19 patient in the intensive care unit at the Joseph Imbert Hospital Center in Arles, southern France, Wednesday, Oct. 28, 2020. Many French doctors are urging a new nationwide lockdown, noting that 58% of the country's intensive care units are now occupied by COVID patients and medical staff are under increasing strain. (AP Photo/Daniel Cole)
ADVERTISEMENT