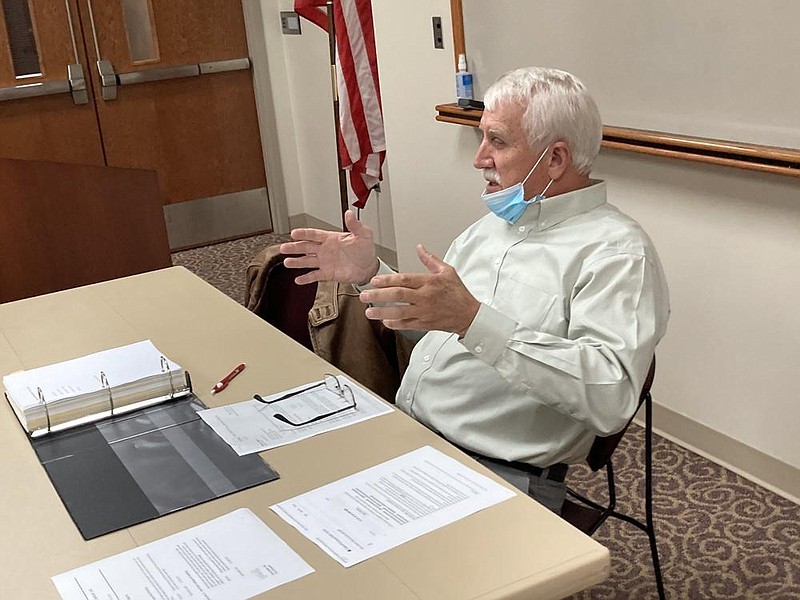 Jimmy Dill, chairman of the Pine Bluff Urban Renewal Agency, talks about the need to protect tax dollars in a proposal that would see the old Walmart store turned into a cinema and fun center. (Pine Bluff Commercial/Byron Tate)

The Pine Bluff Urban Renewal Agency is in discussions with an investor who wants to put a cinema and trampoline park in the old Walmart building at The Pines mall, although the financial arrangements for the deal are far from settled.

Exactly one year ago, Felix Waller, owner of Apex Cinema of Oklahoma, was expressing his desire to bring one of his multiscreen cinemas and a fun center to Pine Bluff, which was reported on by the Pine Bluff Commercial.

At an agency board meeting on Thursday evening, Maurice Taggart, executive director of the agency, said Waller, who has five theaters in New Mexico, Oklahoma and Texas, would like the city to buy the building and then lease it back to him. Taggart said he was not asking for a commitment of funds at present but wanted to be able to give Waller a general idea of what the agency would expect him to pay to lease the property. That information would allow Waller to put together a more accurate proposal for a loan, Taggart said.

Both the agency chairman, Jimmy Dill, and board member Kirby Mouser expressed their reluctance to go forward with any deal that would put tax dollars at risk.

"If we own it and this doesn't work, we'll have to sell it," Mouser said, adding that the current owner, Walmart, has a "list of stuff" that the building can't be used for, such as for a retail business that could be in competition with Walmart. Not being able to sell the building for certain operations would then limit the agency's ability to market the structure, he said.

"We need to know what kind of guarantee there is," Mouser said. "What if Apex files for bankruptcy? I need to know these things."

Said Dill, "I'm not saying this is not a worthwhile proposal. The community really needs this. I'm just cautious about how far we make this leap with taxpayer funds."

Chris Rittenhouse of Pine Bluff, an attorney with the Carter Law Firm of Conway, which provides legal assistance to the agency, said Waller "wants to take all of the risk off urban renewal."

Dill said that he appreciated Waller's commitment to the project, which was estimated at $8 million, but asked how exactly the investor would protect the city's money.

"A bond?" Dill asked. "They can make all the promises in the world," but those promises and the judgment the agency might be able to get against a failed company "may not be worth the paper it's printed on. I just feel like I'm reaching for air; there are just a lot of unknowns."

Taggart reiterated that he was not asking for a green light to buy the building, which he said was going to be auctioned off at the end of November, but just the approval to talk to Waller about what a lease payment would be.

Taggart said working cinemas lease for about $3.16 per square foot. For the Walmart building, which is about 90,000 square feet, the annual lease would be more than $270,000. But because the building has been closed for many years, board members felt that a fairer price, at least until Waller finished the improvements and was able to open, would be $1 per square foot or about $90,000 per year. That amount would be deferred until the improvements were finished, they said.

Taggart said the asking price on the building has been as high as $1.8 million down to $1.3 million but that he felt that $550,000 was more in line with what the building was worth. Dill said that if the agency did spend that much money on the structure, the agency would want the $550,000 to be in a protected escrow account. Only then would the agency be assured that taxpayer dollars would be protected against the company going bankrupt, the investor dying or the investor just walking away.

At the end of the discussion, both Mouser and Dill said they wanted to wait until two other agency board members were present to vote on the matter. So, even though the matter was tabled, the conversation did give Taggart enough leeway to be able to talk to Waller about where the board generally stands on the proposal, Rittenhouse said.

On another matter, the board approved a $680,000 appropriation for infrastructure work in the downtown housing subdivision area, with $180,000 of that coming out of this year's budget and the other $500,000 coming out of next year's.

As part of that Phase I work, the board rescinded an earlier agreement to buy the old bus station at 221 W. Fourth Ave. That $109,000 will be used instead to help pay for the infrastructure work.

Taggart said later that the agency would eventually buy the old bus station but that the money would be better spent at this time on the infrastructure work.

In other business, the board agreed to spend $16,500 to make repairs to the drainage system of the Saenger Theater. The theater has a new roof, but water has been getting in and causing damage because of clogged drain pipes. Most of the money -- $15,000 -- will go toward correcting that problem, which includes trenching about 75 feet of the street and replacing the pipe, while the rest will be used to repair some flashing around the roof that was damaged by weather.