DE Gerald to travel with Hogs 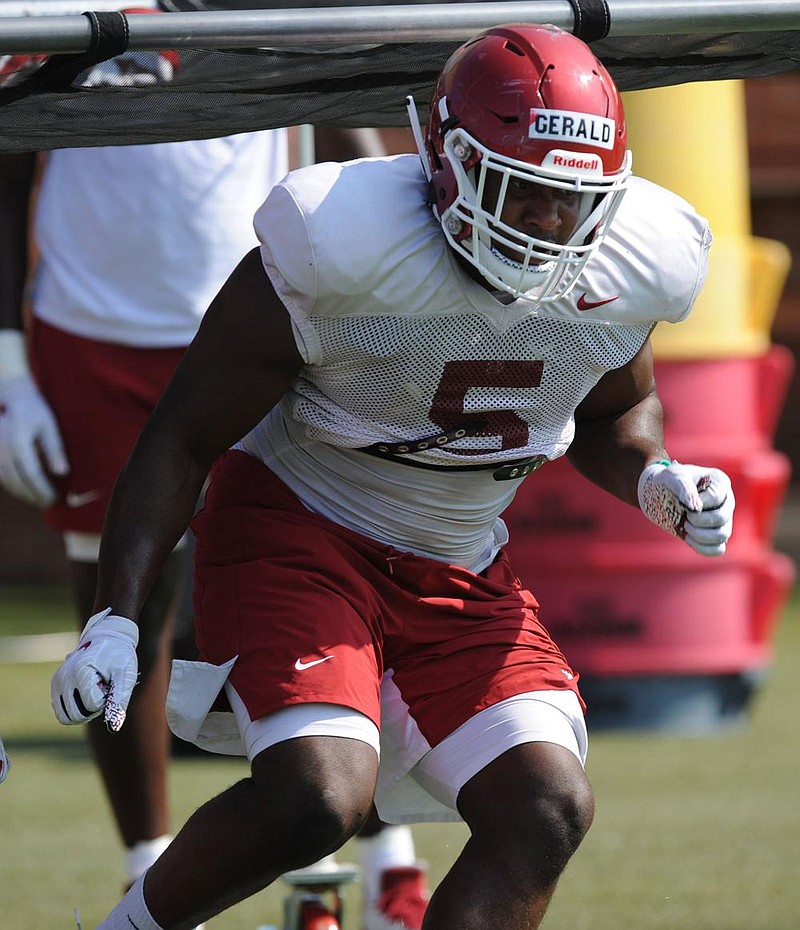 University of Arkansas defensive end Dorian Gerald, shown in a practice last season, hasn’t played since the season opener against Georgia but will travel with the Razorbacks to College Station, Texas, when they take on No. 8 Texas A&M on Saturday. (NWA Democrat-Gazette/Andy Shupe)

FAYETTEVILLE -- Defensive end Dorian Gerald is expected to travel with the University of Arkansas today for Saturday's 6:30 p.m. game at No. 8 Texas A&M.

Gerald has not played since leaving the season opener against Georgia with an ankle injury after racking up 4 tackles and 1.5 sacks for 20 yards in losses.

Coach Sam Pittman said prior to Thursday's practice that Gerald would be evaluated again after the workout and following pregame warmups in College Station, Texas, to determine his readiness.

"We were good on Tuesday and we tested again this morning, so we'll get that test result back tomorrow morning," Pittman said. "So we've been good. Knock on wood that we'll be good again and ready to go."

[Video not showing up above? Click here to watch » https://www.youtube.com/watch?v=jSXzN8FWpBc]

Pittman said cornerback Montaric Brown has gotten in 11 practices since his upper body injury on Oct. 3, and that linebacker Bumper Pool, who sat out the Razorbacks' 33-21 win over Ole Miss, has been practicing this week. Additionally, linebacker Deon Edwards and safety Myles Slusher are expected to be available after missing playing time.

The steady, sometimes heavy rainfall in Northwest Arkansas most of the week, which produced more than 5 inches of rain between Monday and early Thursday afternoon, chased the Razorbacks inside all week.

Coach Sam Pittman said the game-day forecast called for a clear day in College Station, so the best solution was to work in the Walker Pavilion.

"We just made a decision that we knew we could get a better practice by practicing inside, so that's what we did," Pittman said. "I kind of like indoor practices. I like the smell of it, the pop of it, the sound of it."

Pittman added that if the forecast called for rain and a mucky field like it did for the Auburn game, the Razorbacks would have practiced outside more.

Coach Sam Pittman said the Razorbacks revived their physicality in practice this week to prepare for a big Texas A&M team.

"Last week was kind of our week to heal up. We have been smart, obviously, with Dorian [Gerald] and Bumper [Pool] as far as that part of it goes, but the rest of the team, we banged heads pretty good this week."

Ginger Franks, the mother of Arkansas quarterback Feleipe Franks, made the nearly 14-hour drive from the Florida panhandle to Fayetteville to attend the Razorbacks' 33-21 win over Ole Miss two weeks ago.

The commitment obviously made an impression on her son, who played his high school ball in Crawfordville, Fla., south of Tallahassee in west-central Florida.

Texas A&M has won eight games in a row to pull within 41-32-3 in the all-time count against Arkansas.

The Razorbacks have the longest winning streak in series history, a nine-game run between 1958 and 1966 in which Arkansas outscored the Aggies 175-40 and shut them out three times.

Only a handful of active FBS coaches with at least 10 years of head coaching experience can claim the hefty milestone of 10 wins per season, among them, Alabama's Nick Saban and Clemson's Dabo Swinney.