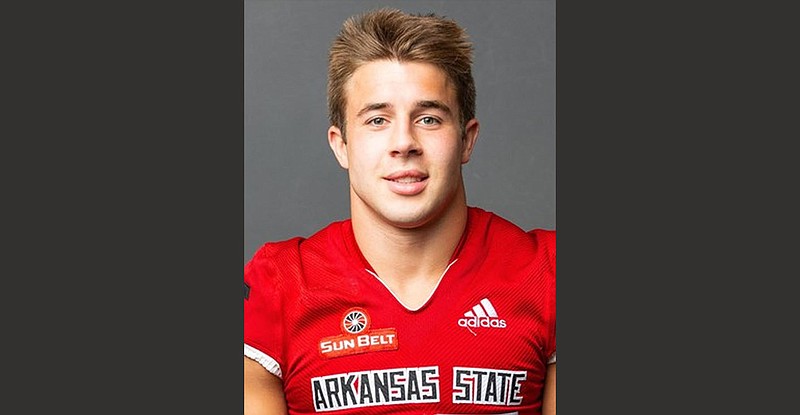 "He's just a little ball of muscle," said James Thomas, Pare's high school coach. "He's making an impact right away at Arkansas State, and it doesn't surprise me at all."

A true freshman at Arkansas State University, Pare has become arguably ASU's top rushing threat this season. Senior running back Jamal Jones is the team's leading rusher with 267 yards on 63 carries, but Pare is close behind with 225 yards on 28 less carries. Pare also has more receptions than any running back on the team, catching 8 passes for 56 yards and 2 touchdowns.

But according to his former and current coaches, no one should be surprised by Pare's early production. After all, he was one of the best players in the state of Tennessee his senior year at Houston High School as he was named the state's 6A Mr. Football in 2019-20.

And now, after being under recruited mostly because of his small stature, Pare is proving his doubters wrong.

"It was definitely tough and definitely different," Pare said of being overlooked. "My coaches just told me to keep my head down and keep working and when an opportunity comes knocking, for me to take that opportunity. It was hard, but the biggest thing for me was to just keep working and be where I'm wanted. I had a lot of walk-on opportunities at Power 5 schools, but at the end of the day, I wanted to be where I was wanted. And Arkansas State wanted me."

Growing up, Pare was a smaller kid with extreme athletic ability, playing football since age 6.

Thomas recalled the first time he saw Pare in eighth-grade during gym class. He was small, but agile. He was also the center of attention, showing off his athletic ability by doing backflips.

"Not too many guys can do a backflip as an eighth-grader," Thomas said. "He's always been athletic and always wanted the ball in his hands. We always knew he was going to be a good player, but we really didn't know he'd do what he did."

By his sophomore year at Houston, Pare had become a staple in the team's offense, rushing for over 700 yards as the backup. He took over the starting job his junior year and became one of the top players in the state as a senior, rushing for at least 100 yards in all 14 games and totaling 3,303 all-purpose yards and 38 touchdowns. He currently holds the school record for career and single-season rushing yards, with 5,645 and 2,804 yards, respectively.

Arkansas State running backs coach Desmond Lindsey went to see Pare the spring before his senior season and immediately knew he was watching a hidden gem.

"The kid was out there like he was 8 years old just having fun, playing ball," Lindsey said. "The entire time I'm watching this kid practice, he was just going 100 miles per hour and smiling and getting his teammates going. He just loved football."

After his visit to Houston High, Lindsey told offensive coordinator Keith Heckendorf that Pare was worth taking a chance on.

But ASU was just about the only Division I school to give Pare a serious look.

He had offers from FCS schools like Dartmouth, Austin Peay, Colgate and Mercer, but had only one other FBS offer (Navy). Multiple Power 5 programs reached out to Pare offering him a preferred walk-on spot, including Ole Miss and Virginia Tech, but he wasn't interested. Many of the bigger programs, and even Group of 5 schools, didn't know if Pare was big enough or had the athletic skill to overcome his size.

"It is what it is," Lindsey said. "You have what I call 'genius recruiters.' You've got a lot of 'genius recruiters' out there saying, 'he's a white running back' or 'he's not big enough' or 'we're not going to take him.' And that's my opinion, but I think that had a lot to do with it."

Pare has heard that all his life, that he was too small and not athletic enough to play major college football. So he lived in the weight room, building himself up so his size wouldn't be a problem. And he perfected his craft in the offseason, playing fullback for the rugby team, which he helped lead to back-to-back state championships.

Pare poured himself into the game on and off the field and that's exactly the type of player Arkansas State wanted.

"We were just sold on here's a guy who just loves ball," Heckendorf said. "Here's a guy that had a lot of walk-on opportunities to Power 5 programs and bigger places and he has that kind of talent, but for whatever reason was overlooked. Probably a lot of it has to do with his size. It's a credit to him and how he trains because it's not just what he does on the field, it's how he gets ready to be on the field. Lincoln has been a great asset for our program and a great asset for that running back room."

Since arriving in Jonesboro in the summer, Pare has tried to soak in as much knowledge as possible, learning from veterans like juniors Ryan Graham and Marcel Murray, and being take under the wing of Jones. And now, halfway through his freshman season, he's become one of the leaders of the group on and off the field.

Lindsey said Pare often holds the other running backs accountable, reminding them when meetings and team dinners are, while also practicing his hardest every day.

"He was very humble, but confident," Thomas said. "Even as a junior he's always take out his offensive line to eat after or before games. He always knew it wasn't just about him. It's about making the people around him better and just making them enjoy the game. He's always had the right personality and attitude toward the game. His charisma, his attitude, his hard work, his grind nature -- he will be successful in whatever he does."

Pare has a lot of football ahead of him at Arkansas State and has aspirations to play beyond his time in Jonesboro.

"He plays bigger than what he is," Heckendorf said. "In recruiting, there's no exact science to it. You evaluate, you compare competition, you look at measurables, you look at a lot of different factors. But at the end of the day, it's hard to measure a guy's heart.

"And he's a guy that has a tremendous amount of heart."