U.S. economy surges on personal spending, the end of lockdowns 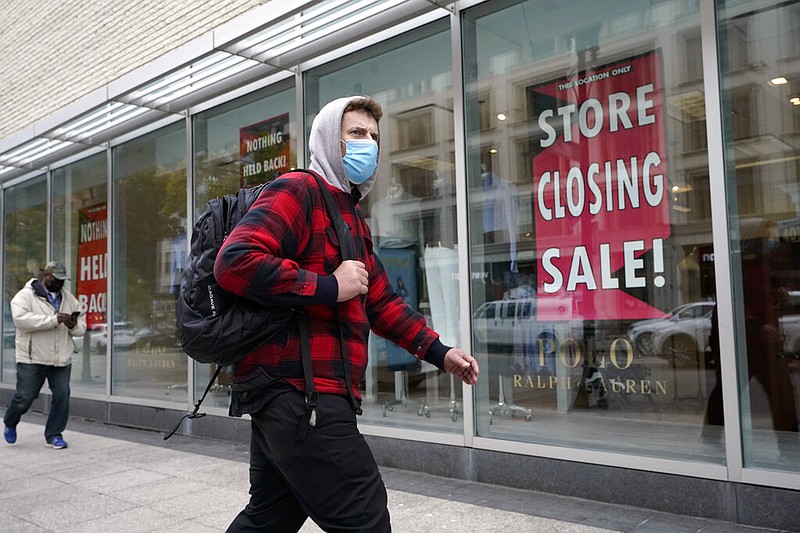 A passerby walks past a store closing sign in the window of a Boston department store on Tuesday, Oct. 27, 2020. The epic economic collapse in the spring was followed by a record rebound over the summer, though analysts warned Thursday, Oct. 29, that the surge was powered by federal aid that has since dried up. (AP / Steven Senne )

The U.S. economy bounced back with a record yet temporary surge of growth in the third quarter as businesses reopened and stimulus cash powered consumer spending -- reversing much of the collapse stemming from coronavirus lockdowns.

Just as the second-quarter plunge in output was the biggest in seven decades of data, so was the recovery: Gross domestic product grew 7.4% from the previous period, a quarterly gain that equals an annualized pace of 33.1%, the Commerce Department's initial estimate showed Thursday.

The figure topped economists' estimates for a 32% increase, which was already well above forecasts three months ago for an 18% gain. Personal spending fueled the surge in growth, climbing an annualized 40.7%, which was also a record. Business investment and housing posted strong increases.

While the report makes clear that the economy has found solid footing for now, analysts caution that growth will be much more modest and choppy in months to come, especially as the spread of the virus gathers pace again and as lawmakers remain in an extended deadlock over a new stimulus package.

Moreover, there are still nearly 11 million fewer workers on payrolls than there were before the pandemic hit, and analysts say a full recovery in gross domestic product is at least several quarters away.

"To the extent that reopening drove the strength in Q3 [the third quarter], not only have we already reopened but we may partially close a few things," said Michael Feroli, chief U.S. economist at JPMorgan Chase & Co. "That's really the elephant in the room when it comes to thinking about Q4 [the fourth quarter]."

The rebound was fueled in part by trillions of dollars in federal assistance to households and businesses. That aid has since dried up, even as the recovery remains far from complete.

"Much of the third-quarter strength was concentrated in the beginning of the period; a significant slowdown has emerged since then," said Andrew Husby, economist at Bloomberg Economics.

President Donald Trump is counting on the figures to give him a boost on Election Day next week. He tweeted Thursday that the number is the "Biggest and Best in the History of our Country" and said his Democratic challenger, Vice President Joe Biden, would implement tax increases that "would kill it all."

[Video not showing up above? Click here to watch » https://www.youtube.com/watch?v=FhsOpAanSXY]

Biden issued a statement saying the recovery "is slowing if not stalling," as well as "helping those at the top, but leaving tens of millions of working families and small businesses behind."

The S&P 500 fluctuated at the open after steep losses over the previous three days.

Gross domestic product fell 1.3% in the first quarter and 9% in the second as the pandemic forced widespread business closures. A big rebound was inevitable once the economy began to reopen.

There are signs that the recovery is losing steam. Industrial production fell in September, and job growth has cooled, even as a growing list of major corporations announced new rounds of large-scale layoffs and furloughs. Most economists expect the slowdown to worsen in the final three months of the year as virus cases rise and federal assistance fades.

The third-quarter rise spanned most categories. Residential investment jumped 59.3%, the fastest since 1983, reflecting a boom in the housing market, supported by record-low mortgage rates.

Business investment rose 20.3%, though that was driven by equipment, as structures and intellectual property both showed declines.

The rebuilding of inventories added 6.6 percentage points to the quarterly growth pace and will probably continue to be a prop in the current quarter as companies add to stockpiles that were whittled during lockdowns.

The pandemic's effect on Americans' spending patterns was also clear from the report. Consumer spending typically makes up about two-thirds of gross domestic product.

Goods spending was above pre-pandemic levels, driven by increases in motor vehicles and apparel. Services gained on rebounds in health care and food services and accommodations, but overall outlays remained shy of levels seen at the end of last year.

Meanwhile, net exports subtracted 3.1 percentage points from growth as the trade deficit widened. Government spending was a 0.7 point drag because of nondefense and state and local outlays.

The third-quarter figures are also in line with generally solid corporate reports during the latest earnings season. So far, about 85% of S&P 500 companies that have reported earnings have beaten analysts' estimates, including General Electric Co. and Microsoft Corp.

This is the first estimate of three for the third-quarter figures, and the figure is likely to be revised over the next two months as the Bureau of Economic Analysis receives further data.

Forecasts for the next economic report at the end of this quarter are highly uncertain this early in the quarter. But most forecasters expect growth to slow to about 1% to 1.5%, with some economists anticipating even weaker results. That would leave the economy about 2.5% smaller than before the pandemic.

Information for this article was contributed by Reade Pickert of Bloomberg News and by Ben Casselman of The New York Times.