U.S. gets low marks on pandemic efforts; could have saved lives, doctors say 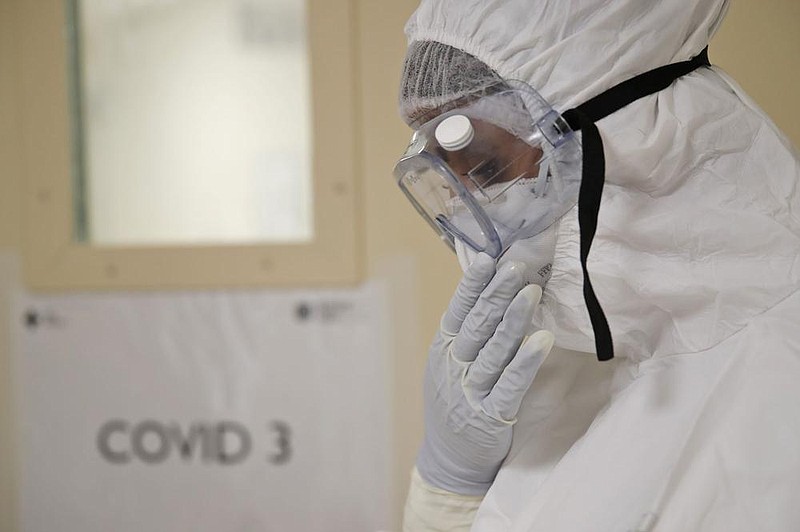 Nurse Jessica Iommi waits Thursday to enter the sub-intensive care unit at the San Filippo Neri hospital in Rome. Italy hit another record of confirmed new cases of coronavirus Thursday, approaching 27,000, an increase of about 2,000 in one day. (AP/Alessandra Tarantino)

NEW YORK -- As a new wave of infections sweeps the U.S., the nation's handling of the nearly 8-month-old crisis has been marked by what health experts see as grave missteps, wasted time and squandered opportunities by leaders at all levels of government.

"The inconsistency of the response is what's been so frustrating," said Dr. Irwin Redlener of the National Center for Disaster Preparedness at Columbia University in New York. "If we had just been disciplined about employing all these public health methods early and aggressively, we would not be in the situation we are in now."

Though Redlener sees some of the new wave as inevitable, he estimates that at least 130,000 of the nation's more than 227,000 deaths could have been avoided had the country embraced masks and social distancing more widely.

Even if a Chinese-style lockdown wasn't possible, Redlener said, a more modest approach like Canada's, with a strong central message of caution in reopening and widespread mask-wearing and distancing, would have saved lives over the state-by-state approach.

Now the U.S. is seeing cases spike, especially in the Midwest and the Plains, with the country posting a record-high number of new infections last week of nearly a half-million.

"We don't want to shut down completely," Fauci said in an online interview with Howard Bauchner, the Journal of the American Medical Association's editor-in-chief. "That's almost radioactive now when you say that because of the situation of not wanting to hurt the economy. Well, if you don't want to shut down, at least do the fundamental, basic things ... the flagship of which is wearing a mask."

"We can't have this very inconsistent wearing, where you see some states that absolutely refuse to wear a mask," the 79-year-old physician and immunologist said. "It almost becomes a political statement. We've got to get away from that."

[Video not showing up above? Click here to watch » https://www.youtube.com/watch?v=jyrFzf3iI6Y]

Fauci stopped short of calling for a mask mandate, instead imploring Americans to look "at the consequences of what happens" when they're not worn.

"We have to sort of shake each other by the collar and say, 'Take a look at what's going on. Look at the data,'" he said. "We're in a very difficult situation."

In the early days of the outbreak, governors were nearly universal in enacting restrictions to try to flatten the curve. But they quickly faced backlash from residents who were irate over the economic devastation and what many saw as an infringement on their constitutional freedoms.

In Utah, state epidemiologist Angela Dunn called for restrictions to be reinstated in June to avoid overwhelming hospitals, warning: "This might be our last chance for course correction." Republican Gov. Gary Herbert has not imposed a statewide mask requirement.

Utah's hospitals are now treating more covid-19 patients than ever before even as the state remains open for business, most high school students are attending class in person, and football and other sports have gone on.

In neighboring Idaho, Republican Gov. Brad Little has also resisted a mask mandate even as hospitals are in a crisis and having to airlift patients to Seattle and other locations.

As Little added some restrictions this week such as limits on crowd sizes, his lieutenant governor and a few GOP lawmakers released a video denouncing such measures as unconstitutional.

"This pandemic has been more politicized than any pandemic I've ever experienced or worked on or studied, and that's a lot of pandemics," said Dr. Howard Markel, a public health historian at the University of Michigan.

While some of the blame goes to local leaders and their supporters, Markel said a large share belongs to President Donald Trump and other administration officials who have not supported governors taking tougher steps and have themselves refused to wear masks.

"That sets an example, whether you recognize it or not," he said.

Cooler weather driving more people indoors where the virus is more easily spread are now combining with fatigue and anger over virus restrictions for a dangerous new stage.

"When you put those three together, we shouldn't be surprised what we're seeing," said Michael Osterholm, a University of Minnesota expert on infectious diseases and pandemic preparations.

Meanwhile, even as coronavirus cases and deaths were rising last spring, Jared Kushner, Trump's senior adviser and son-in-law, told journalist Bob Woodward that the president had taken the "country back from the doctors."

The comment was made April 18 as Woodward was reporting for his book "Rage," his second about the Trump presidency. CNN obtained an audio recording of the interview.

"There were three phases," Kushner said. "There's the panic phase, the pain phase and then the comeback phase ... that doesn't mean there's not still a lot of pain and there won't be pain for a while, but that basically was: We've now put out rules to get back to work. Trump's now back in charge. It's not the doctors. They've kind of -- we have, like, a negotiated settlement."

Kushner had several conversations with Woodward that White House officials have said he believed were on background, and not for quoting.

"As he has said numerous times, the cure cannot be worse than the disease," she said. "When it was in the best interest of the country to shut down, he did so at the advice of top health officials. However, as president, he must take a holistic approach to the virus and consider the devastating effects of lockdowns and the consequences of keeping our economy shut down for an extended period of time."

"We lost control of the epidemic," Dr. Eric Caumes, head of infectious and tropical diseases at Paris' Pitie-Salpetriere Hospital, told broadcaster Franceinfo. Though infections rose in France over the summer, the government didn't impose additional restrictions, encouraging people to return to work and school.

Italy, the one-time European epicenter of the pandemic, has seen days of protests over new restrictions that have forced bars and restaurants to close at 6 p.m.; shuttered theaters, gyms and pools; and required high school students to transition to 75% distance learning.

At Rome's Gemelli hospital, few beds remain in the intensive care unit, while one of the country's leading virologists, Andrea Crisanti, has criticized the government's response to the surge. He said he submitted a proposal Aug. 20 calling for ramped-up testing and never got a response.

"Three months later they're passing new decrees," he wrote in an essay published by the Lettera 150 online think tank. "They continue in the error of not asking themselves how, once the contagion levels are reduced via progressively more restrictive measures, they're going to keep them low."

In Britain, the government has tried to strike a balance between saving lives and protecting the economy and has been widely accused of getting it wrong on both fronts. Britain has Europe's highest coronavirus death toll, at more than 45,000, and one of its deepest economic slumps.

After locking down the country in March, Prime Minister Boris Johnson eased restrictions in June. By August, the government encouraged people back into restaurants with an "Eat Out to Help Out" discount scheme.

When a new surge came, the government clamped down again.

Meanwhile, despite worries over surging cases, survival rates in the United States, even of seriously ill patients, appear to be improving. At one New York hospital system where 30% of coronavirus patients died in March, the death rate had dropped to 3% by the end of June.

"In late March, 4 in 10 people in intensive care were dying. By the end of June, survival was over 80%," said John Dennis, a University of Exeter Medical School researcher who is first author of a paper about improved survival rates in Britain.

Researchers at NYU Langone Health who zeroed in on why there were fewer deaths, analyzing the outcomes of more than 5,000 patients hospitalized at the system's three hospitals from March through August, concluded the improvement was real. Even when they controlled for differences in the patients' age, sex, race, underlying health problems and severity of covid symptoms, they found death rates had dropped significantly, to 7.6% in August from 25.6% in March.

A combination of factors contributed to the improved outcomes of hospital patients, the authors of the two studies and other experts said. As clinicians learned how to treat the disease, incorporating the use of steroid drugs and non-drug interventions, they were better able to manage it.

State health officials are expressing frustration about a lack of federal financial support as they face orders to prepare to receive and distribute the first doses of a coronavirus vaccine by Nov. 15, even though one is not likely to be approved until later this year. The officials say they don't have enough money to pay for the enormous and complicated undertaking.

The CDC is asking states to provide critical information by Tuesday, including a list of each jurisdiction's top five sites capable of receiving and administering a vaccine that must be stored at ultracold temperatures of minus-94 Fahrenheit. The letter refers to the vaccine only as Vaccine A, but industry and health officials have identified it as Pfizer's candidate.

"We acknowledge that you are being asked to do unprecedented work," wrote Nancy Messonnier, director of the CDC's National Center for Immunization and Respiratory Diseases, which is leading the CDC's role in vaccine distribution. She added: "This is a new planning ask."

State officials say they have been trying to raise the issue with federal officials but have received little response.

Information for this article was contributed by Matt Sedensky, Mike Stobbe, Sophia Eppolito, Brady McCombs, Nicole Winfield, Jill Lawless and Raf Casert of The Associated Press; by Jason Gale of Bloomberg News; by Roni Caryn Rabin and Maggie Haberman of The New York Times; and by Lena H. Sun of The Washington Post. 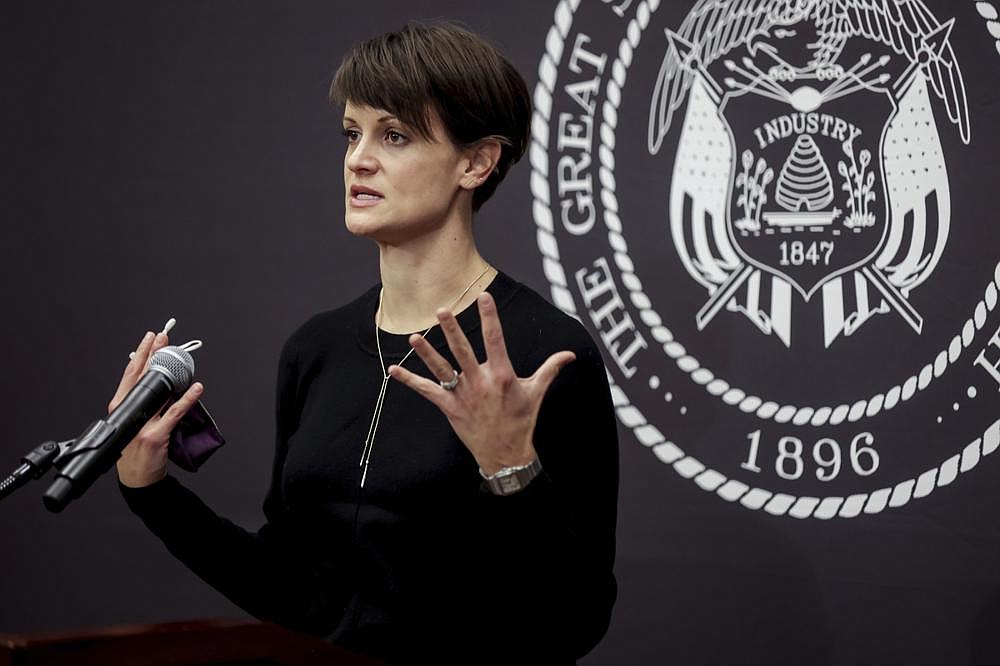 Utah state epidemiologist Dr. Angela Dunn, speaking at a briefing Thursday at the Utah state Capitol in Salt Lake City, called for reinstatement of restrictions to keep hospitals from being overwhelmed. “This might be our last chance for course correction,” she said. Republican Gov. Gary Herbert has resisted ordering a statewide mask requirement. (AP/Deseret News/Spenser Heaps) 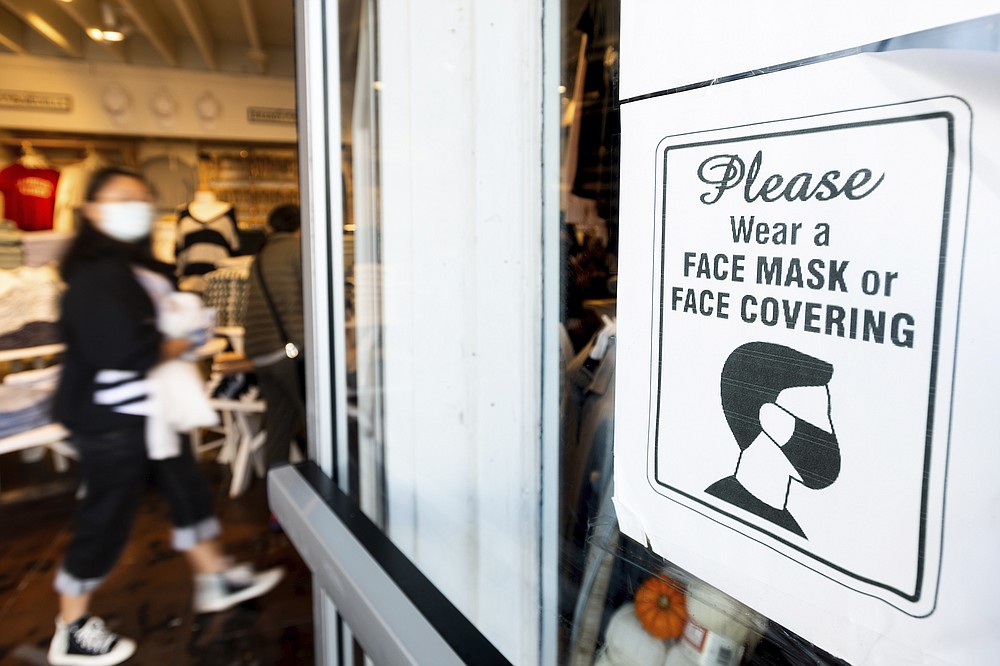 A shopper passes a sign urging customers to wear masks at a Brandy Melville store on Wednesday, Oct. 21, 2020, in San Francisco. As the coronavirus pandemic transforms San Francisco's workplace, legions of tech workers have left, able to work remotely from anywhere. Families have fled for roomy suburban homes with backyards. The exodus has pushed rents in the prohibitively expensive city to their lowest in years. (AP Photo/Noah Berger) 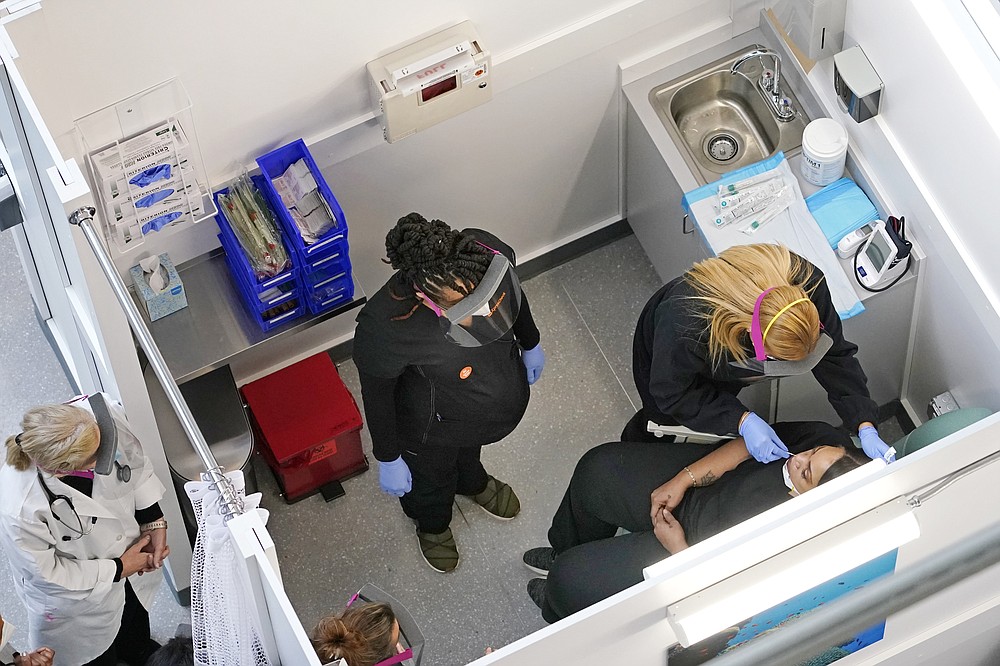 A swab test is administered to a woman at the new XpresCheck COVID-19 testing facility at Boston Logan International Airport, Wednesday, Oct. 28, 2020, in Boston. The testing site is open for airport and airline employees, and will open to passengers and the general public in mid-November. (AP Photo/Elise Amendola) 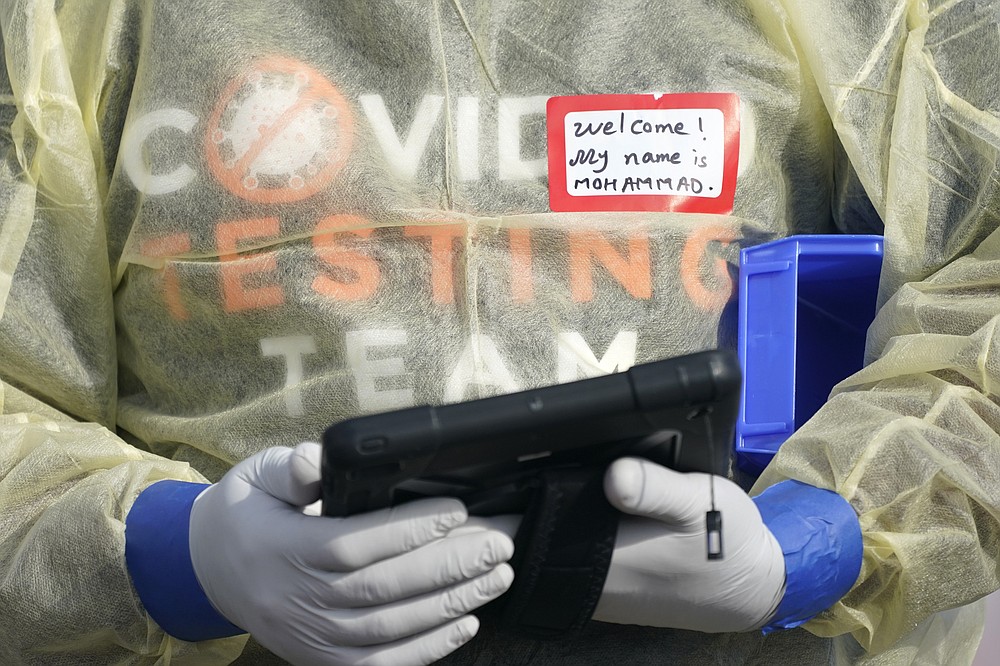 A worker wearing gloves, and other PPE holds a tablet computer as he waits to check people in, Wednesday, Oct. 28, 2020, at a King County coronavirus testing site in Auburn, Wash., south of Seattle. State health officials say that a new COVID-19 report released Wednesday shows an increase in coronavirus cases and hospitalizations throughout Washington state, and if not brought under control, officials said the spike could jeopardize progress toward reopening schools, strain the health care system and increase risks during the holiday season. (AP Photo/Ted S. Warren) 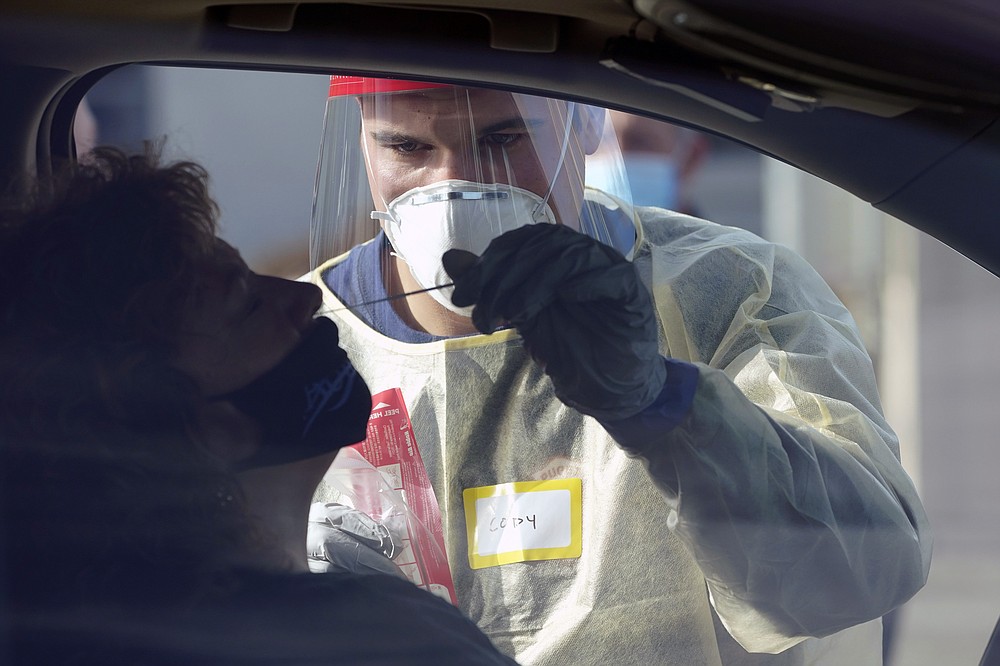 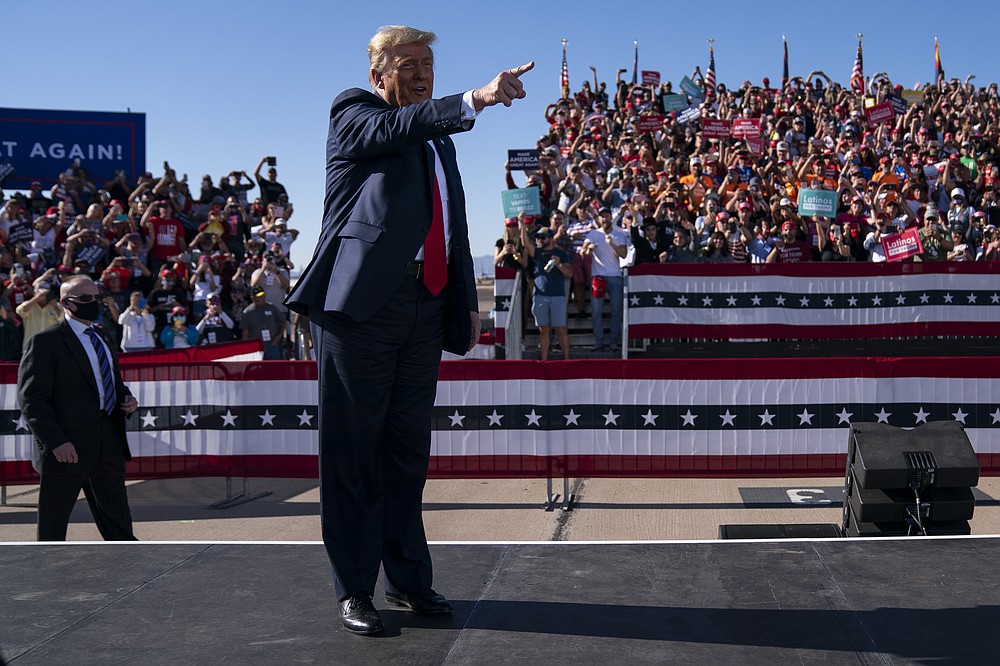 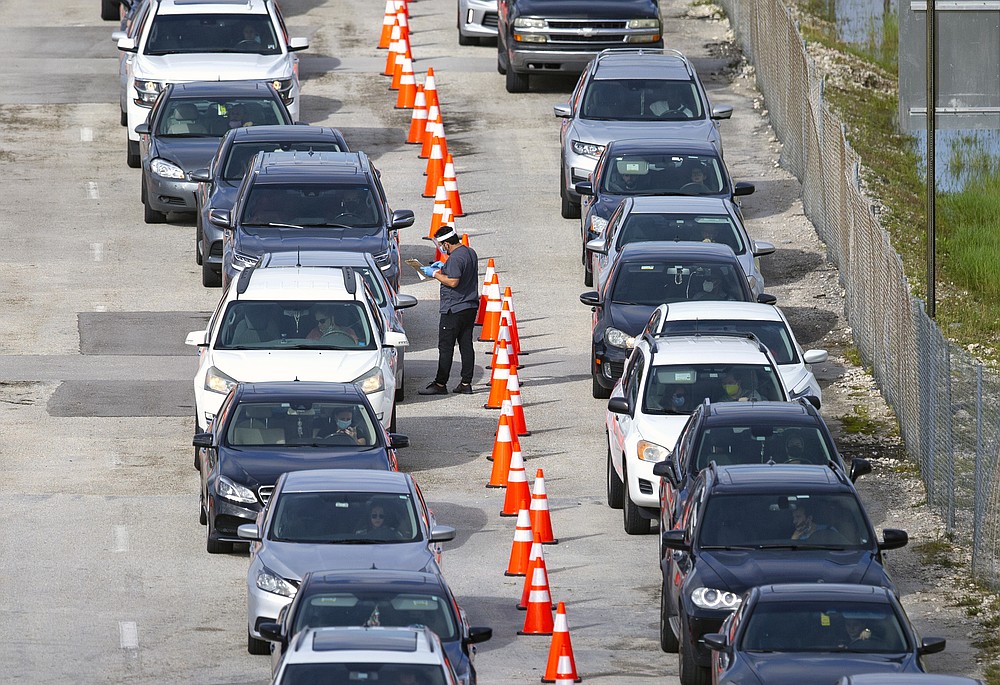 Vehicles line up as a healthcare workers help check people in as they are being tested at the COVID-19 drive-thru testing center at Hard Rock Stadium in Miami Gardens, Fla. on Wednesday, Oct. 28, 2020. (David Santiago/Miami Herald via AP) 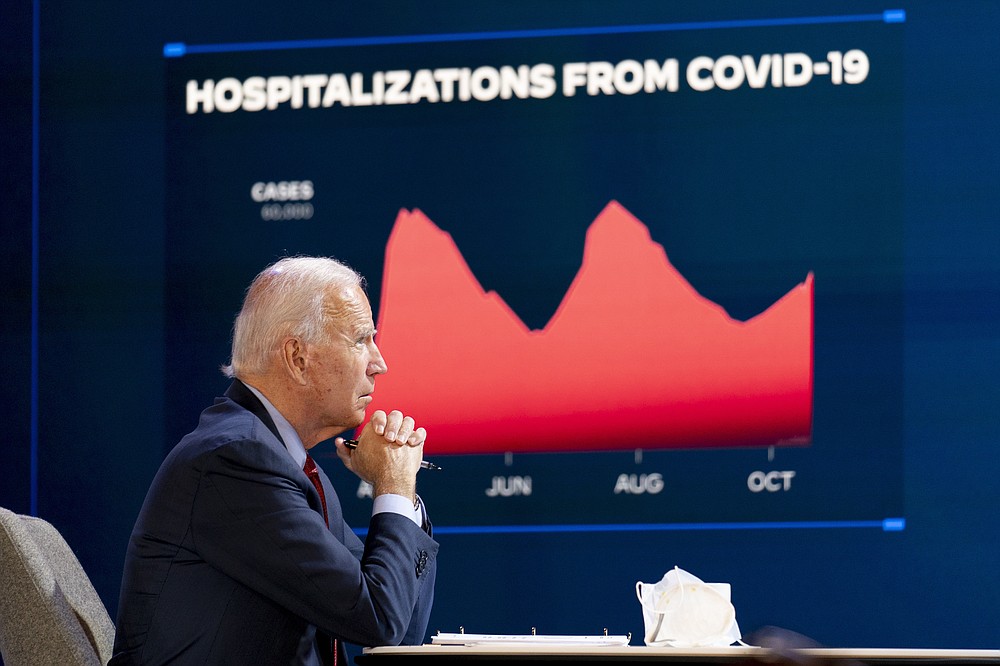