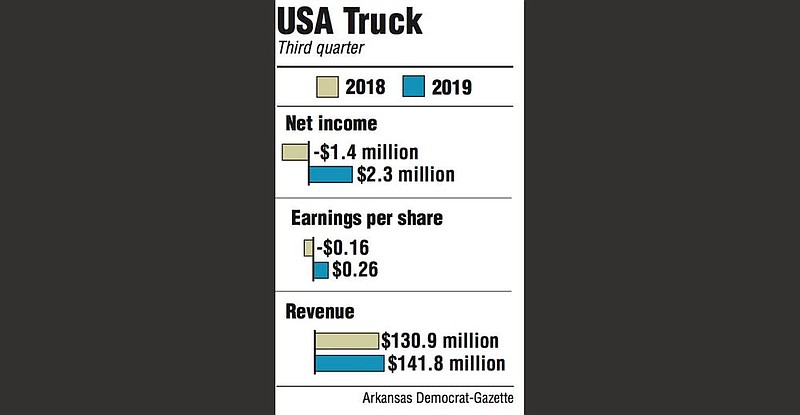 USA Truck Inc. on Thursday reported a third-quarter profit of $2.3 million compared with a loss of $1.4 million in the same quarter a year ago.

Earnings per share was 26 cents, up 263% from last year. Revenue also rose 8% to $141.8 million as the trucking and logistics industry faced pandemic-related head winds.

USA Truck's president and chief executive, James Reed, said in a report released after the stock market closed that it "was a tale of two freight markets" throughout the quarter. The company dealt with unpredictable freight swings for most of 2020 until the middle of August, at which point capacity tightened and demand strengthened.

Despite the difficult driver market, Reed said USA Truck was able to improve its trucking operating ratio and logistics business, which had historically high revenue months because of increased market rates.

"We expect the combination of tighter supply and traction gained on self-help initiatives will set us up well for the fourth quarter of 2020 and beyond," he said.

The Van Buren company surpassed Wall Street expectations in the three months that ended Sept. 30. It reported adjusted earnings per share of 29 cents, far higher than the FactSet consensus estimate of 4 cents.

Jack Atkins, a Stephens Inc. analyst, commended USA Truck for executing under the current supply-demand backdrop in the U.S. He noted the favorable trends that carried the company through a lot of the quarter, resulting in "markedly improved operating metrics" for both business segments.

"In short, [they] executed," Atkins said in a research brief. "Which we believe bodes well for the company as it transitions into peak season" and an even stronger 2021.

The trucking segment generated operating revenue of $97.4 million, up more than 4% from last year's quarter. Base revenue per available tractor per week increased $318, or 10%, from a year ago, and $457, or $15%, from the second quarter because of lower tractor counts and higher base revenue per loaded mile.

Base revenue per loaded mile rose 19 cents, or 9%, from last year and 27 cents, or 13%, from the second quarter because of increased demand and tighter supply, which led to higher rates.

It generated operating revenue of $52.1 million, an increase of $12.7 million, or 32%, compared to the same quarter last year.

Logistics income increased by $700,000 from a year ago and the segment's operating ratio improved by 130 basis points.

Gross margin dollars grew 22%, or $1.1 million, to $5.9 million compared with the same quarter last year. They increased about that much from the previous quarter, too.

USA Truck is hosting a conference call with analysts to discuss the results today at 8 a.m. Callers can dial (844) 824-3828 or visit the company's investor relations website to listen in.