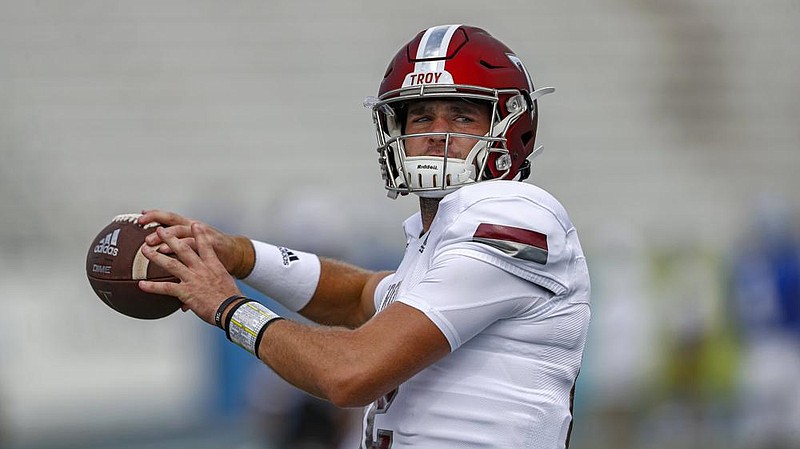 Troy junior quarterback Jacob Free stepped in last week against Georgia State and passed for 329 yards after sophomore Gunnar Watson went down with an injury. Both could play today against Arkansas State. (AP/Wade Payne)

Last week against Georgia State, Troy was forced to play its backup quarterback, junior Jacob Free, after sophomore Gunnar Watson left the game in the first quarter because of an injury. While Troy doesn't rotate its QBs like ASU does, Free showed he's more than comfortable running the Trojans' offense. Free was 24 of 38 with 329 yards, 2 touchdowns and 2 interceptions in a 36-34 loss against the Panthers.

"I was really excited about him. He came in, was calm and cool and very composed," Troy Coach Chip Lindsey said on the Sun Belt teleconference. "He had a look in his eye like he was excited, not nervous or intimidated or anything like that. He hasn't played really in two years if you think about it, other than some mop-up duty in our first game. So for him, it was his first action really in almost two calendar years. I thought he handled it very well. Our team believes in him. If Gunnar's unable to go, I think Jacob will still bring a whole game plan to the table. He can run our offense for sure."

Lindsey said Monday he didn't know if Watson would be available for today's game, but that "he's pretty sore and all that. I think by about the middle of the week we'll know if he's going to have a shot to be able to play or not. There's still a lot to be determined."

"I've been around that," Paremski said. "When I was West Texas A&M, we were about an hour and a half away from Lubbock and our offensive staff would go down and see Mike Leach just about every day. So I saw that offense for a solid 10 years. So I feel like I know it fairly well."

Paremski said it doesn't necessarily matter who the quarterback is in that style of offense, as along as they understand the system.

While Paremski doesn't think it'll change Troy's game plan, it could be a good thing for Arkansas State's defense to face an inexperienced quarterback like Free. The Red Wolves have struggled defensively, ranking 91st out of 101 teams in total defense and having their defensive coordinator, David Duggan, fired after the fifth game this year.

But Coach Blake Anderson believes his team can turn things around. Despite 28- and 29-point losses to Coastal Carolina and Appalachian State, ASU still controls its own destiny to reach the Sun Belt title game, having not played any West division teams yet.

"We still control what happens to us," Anderson said. "We still plan on playing in a conference title game at the end of the year and getting a shot at somebody again. But we have to play much better football. I think physically we can. We've got to get the execution."

Execution, Paremski said, is the key for the defense to turn things around in the back half of the season. Anderson agrees, knowing that if his team can execute better it has a chance to run the table.

And that starts today against Troy.

"We still have a ton of ball games ahead of us we can win," Anderson said. "This team by no means has given up. I know there are some people in our fan base that have and all I know to tell you is you're giving up too quickly. We are more than capable of winning games in this league. We just have to be patient and keep improving."