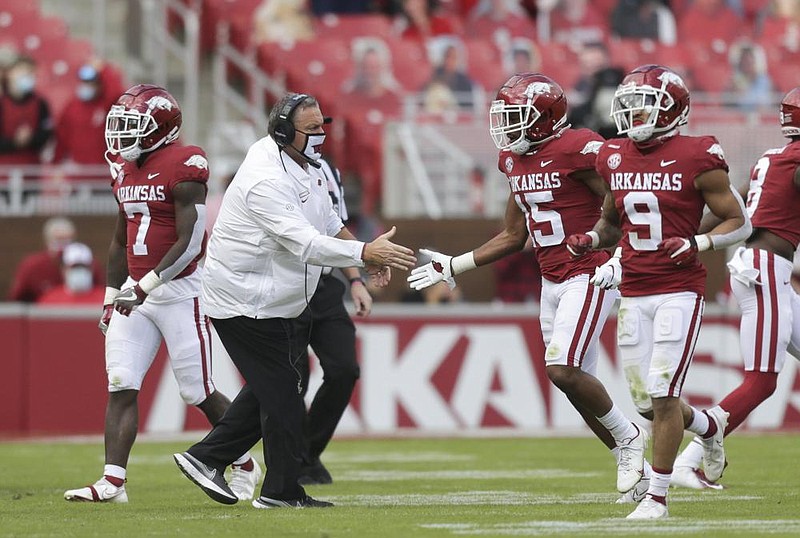 First-year Arkansas Coach Sam Pittman and the Razorbacks will seek to end an eight-game losing streak to Texas A&M tonight at Kyle Field in College Station, Texas. But the Hogs have already ended lengthy streaks this season, halting a 20-game SEC losing streak against Mississippi State on Oct. 3, then a 12-game skid in SEC home games against Ole Miss two weeks ago. (NWA Democrat-Gazette/Charlie Kaijo)

The Razorbacks have become an America's darling of sorts for the way they've gotten off the mat and become a tough out during this SEC-only season. They've also drawn admiration for being positioned for an upset at No. 13 Auburn before a blown referee's decision cost them a win.

Arkansas has been in the business of breaking skids through the first month of the shortened season. The Razorbacks halted their 20-game SEC losing streak with a 21-14 victory at Mississippi State on Oct. 3, then ended a 12-game skid in SEC home games by downing Ole Miss 33-21 two weeks ago.

Snapping their eight-game losing streak in the Southwest Classic would seem an even tougher proposition against an Aggies team favored by 13 1/2 points.

The Aggies have lost to only Alabama, and pundits are now discussing their chances of slipping into the College Football Playoff for the first time.

"Right now, it's the A&M Aggies' opportunity, knowing they could back-door their way into the College Football Playoff," SEC Network analyst Matt Stinchcomb said. "You've got to beat Arkansas for that dream to stay alive."

The Razorbacks have given their fans reason to hope Pittman's leadership will put the program on the upswing in the coming years, and snapping their drought against Texas A&M would be a start. Arkansas lost three games in overtime to the Aggies under Bret Bielema and played them within a touchdown the past two seasons under Chad Morris while going 0-16 in league play.

"With Bielema ... there were close games, but it also felt like you maybe didn't have the firepower that they had across the way from you and the explosiveness," former Arkansas quarterback Tyler Wilson said.

The Razorbacks' first All-SEC quarterback, Wilson was at the helm of one the program's biggest comebacks in Arkansas' last win in the series against A&M. He passed for a school-record 510 yards in a 42-38 thriller in 2011.

"Even though we were keeping up, it just felt like we were maybe one magazine short," Wilson said of the Bielema years against the Aggies. "That's where I think it could be real exciting here moving forward. Chad Morris never really got traction with that uptempo offense in being able to score points. You feel like you might have that with Kendal Briles, but Barry Odom has been the story early.

"I think you've got a unique combo here with Sam and the covid that's going on and everybody's schedules being a little out of whack. This year is a funny year. You would certainly think that Arkansas, based on the way they've played the last two or three weeks, would have a chance to come in and reverse that [trend] in the series."

Pittman was on the sidelines as Arkansas' offensive line coach for a 45-33 loss to the Aggies at Reynolds Razorback Stadium in 2013, followed by two overtime losses (35-28 and 28-21) in Arlington, Texas.

"I remember when Johnny Manziel came in here, and he was running all over the place," Pittman said. "And then we sent it to Dallas and I remember the two games. I think both of them went into overtime. ... I think we were ahead most of the game in both of them, but we got beat late. ... I just remember the disappointment of losing those two close games."

"It's just always been a big-time game," Mond said. "I can't tell you why exactly they're always close games, but I feel like that's just the type of competition that's always in the SEC."

"It would mean a great deal," Arkansas receiver De'Vion Warren said of snapping the streak. "We're going to give it our best to go in and be the best team we can be. We've got to go in and focus on playing the best ball that Arkansas can play."

Fisher acknowledges the benefits of playing the Razorbacks at the neutral site at AT&T Stadium, but he's happy this game will be on the Aggies' campus.

"Anytime you can play in Kyle Field, that's a great thing, and we'll try to take advantage of that this weekend," Fisher said. "Here's the things about fans. I know they bring energy, but I ain't never seen any of them get on the field. Winning and losing has a lot to do with the team that is lined up on the other side."

Pittman was asked about the Aggies winning every game in the series since joining the SEC in 2012.

"Well, I think they must have played a lot better than us in every game they beat us in, I would assume," said Pittman, who estimated the Aggies rank No. 2 on the Razorbacks' list of rivals behind Texas. "That's a pretty good record, 100%."

The Razorbacks rallied from a 35-17 halftime deficit to win the 2011 game, with Jarius Wright catching 13 passes for a then-school record 281 yards and 2 touchdowns.

"That one was a big one for us," Wilson said. "I thought it was important for Arkansas to stake its claim on that series, but since then A&M has dominated it."

Former Arkansas receiver Drew Morgan lived on the other side of that ledger, never beating the Aggies in his career from 2013-16.

Wilson thinks there's some truth that A&M joining the SEC was not good for Arkansas football.

"I think there is," he said. "Texas just historically has gotten their pick of the litter in Texas, but the game is changing.

"Now with Texas A&M involving themselves in the SEC has made a platform that I think kids maybe even feel is more lucrative potentially for them in the future than playing at Texas. Certainly more eyeballs watching the games than maybe they would if they were playing at Texas."

The Aggies' presence in the SEC and their recent domination of the Razorbacks will be only backdrops when the game kicks off.

"Would I feel any better if we beat A&M versus Ole Miss?" Pittman said when asked about the Aggies' dominant run. "Not at all. I'm just trying to get our team ready to win every one of them, get them prepared as well as we possibly can. But A&M's got a good team, so it would be fun if we did win, but it's kind of another game, honestly."