IN THE GARDEN: Strawberry euonymus 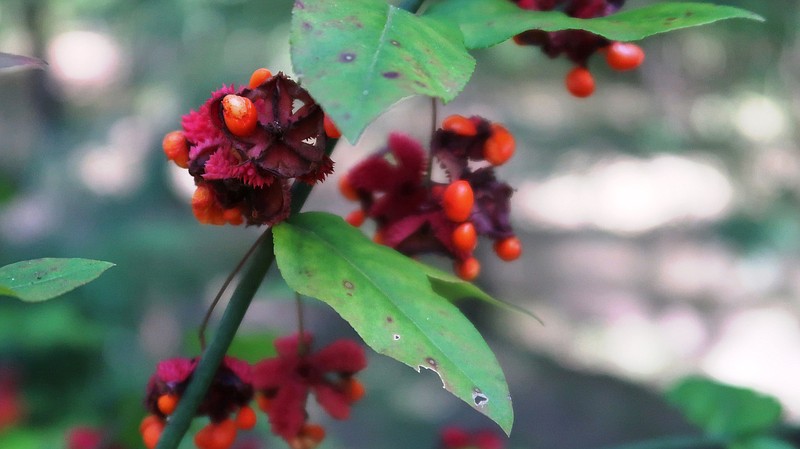 Q I'm out in the woods deer hunting. Any idea what this plant is?

A The native small shrub in question is Euonymus americanus, commonly called strawberry euonymus or hearts-a-burstin'. A woodland shrub, it produces multiple canes and never gets more than 5 or 6 feet tall and about 4-5 feet wide. The plants bloom with tiny yellowish-green flowers in the summer. The flowers are followed by small green capsules. As they age, they turn a strawberry red and are slightly warty. When they really shine is when the capsules pop open to expose bright orange seeds.

Q Everything you wrote about lespedeza in the Oct, 17 issue throws my experience with lespedeza into a cocked hat! I was born and reared for a number of my early years in Franklin County on a dairy farm. My dad seeded his pastures with lespedeza, and we had several meadows where we grew it for winter hay. It grew profusely and was similar to alfalfa. We could get two cuttings a year and the meadows could be used for winter grazing after harvest — so it was apparently fairly winter hardy. So where am I in my impressions gained from the column? Dad was a college-educated person well versed in botany and could readily identify almost any plant. Are there varieties of lespedeza that would differ markedly from what you're describing? Any variety that "hugs the ground" could not be mowed and raked for hay — as I witnessed my dad doing as well as neighbors did with theirs? It's not a world-shaking matter — it just doesn't make sense to me.

A There are many varieties of lespedeza. Some are weeds, others are pasture species, and some are even shrubs. The three species most commonly used for pastures are Sericea lespedeza, Lespedeza striata and Korean lespedeza. Annual lespedeza is a ground-hugging weed in the lawn. Lespedeza bicolor is also called bush clover and can be a showy ornamental. Different species in the same family.

Q I am wondering, first, what is the plant with the blue flower [in my photo]? It shows up here and there in my gardens and recently bloomed. Second, how can I tell if the plants [in a second photo] in the pot and in the ground are chives? I had thought the pot was probably greenery from a flower planted in early spring. Its blooms are similar to those of the other plant, long suspected to be chives. It's in an area I tried to plant herbs until the rosemary took over and formed a bush. Thank you for any help you can give me. 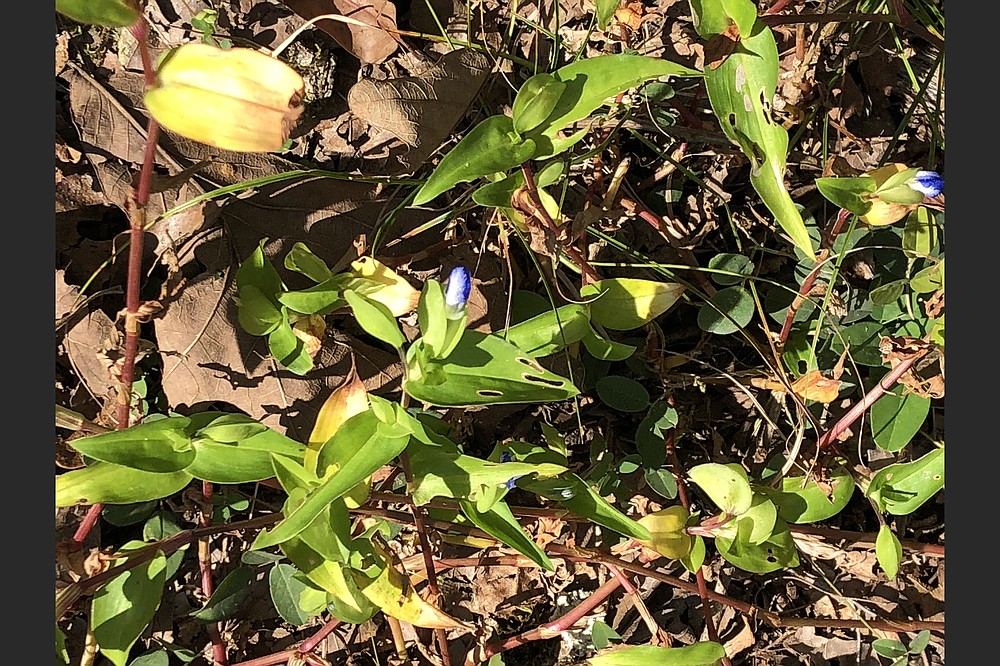 Asiatic dayflower, Commelina communis, is a weed native to Asia with flowers that last one day each. (Special to the Democrat-Gazette) 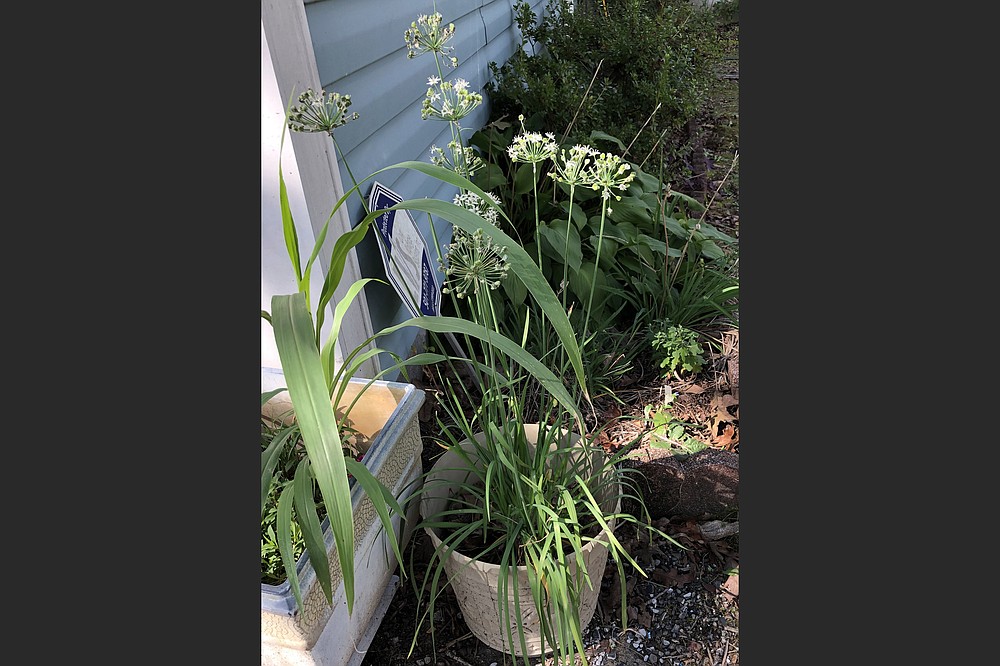 Garlic chives spread aggressively but bees love the flowers. (Special to the Democrat-Gazette)

A The small blue flower is a weed commonly called Asiatic dayflower, Commelina communis, native to Asia. Each flower only lasts a day, but it does have a lovely blue color. The white-flowering plant is garlic chives. If you look closely, you'll see the flower heads are beginning to set small, black seeds. They will scatter, and you will have a whole lot of garlic chives next year. It can be quite invasive. The bees love the flowers, so I let it bloom, then deadhead to prevent seed set. I have way more of these plants than I intended to have!

Q I have a maple tree that has been dying at the top and on the eastern side of the tree. There are no obvious insects or disease issues. The County Extension Service said it is probably a root issue. Now another maple tree 15 feet away is starting to look similar at the top. I would hate to lose these trees. Any ideas on treatment or cause? 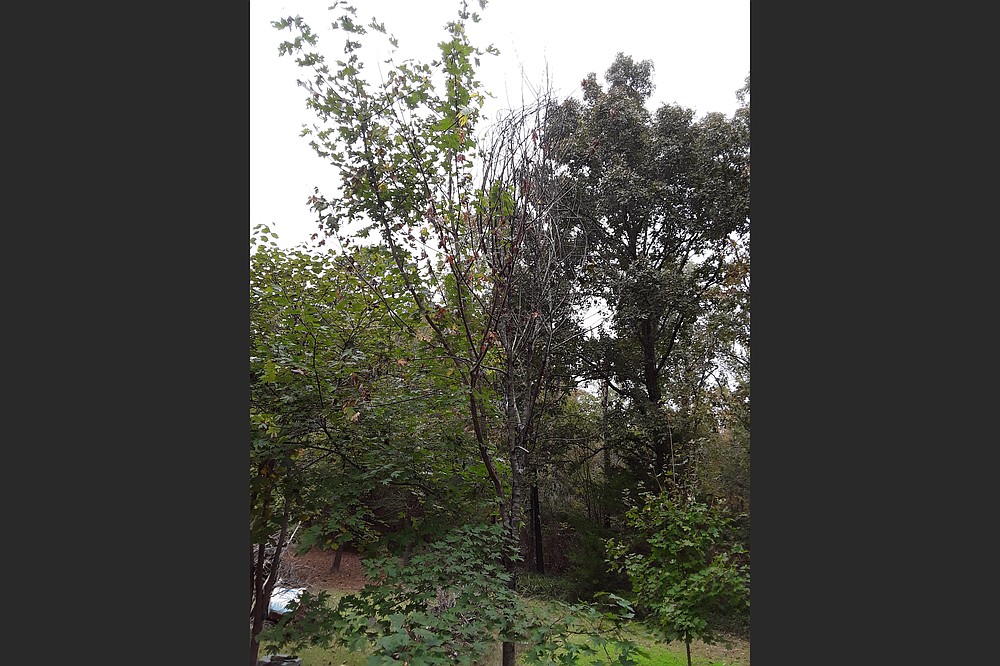 These two maple trees seem to dying from the top but might just have a chemical burn. (Special to the Democrat-Gazette)

A Have you sprayed any herbicides in your yard? That can cause leaf damage. I can see the small tree in the distance and it looks burned, but that is a guess without seeing the leaves up close. Nothing to do for now except wait and see how it leafs out next spring. The maple in the foreground also looks like it has a tight V crotch with two main branches leading from that. It appears that only one side of the tree is affected. I would cut that part out, making as clean a cut as possible, and see what happens next spring. It is possible that they started to push each other apart and that could be a cause of the problem.