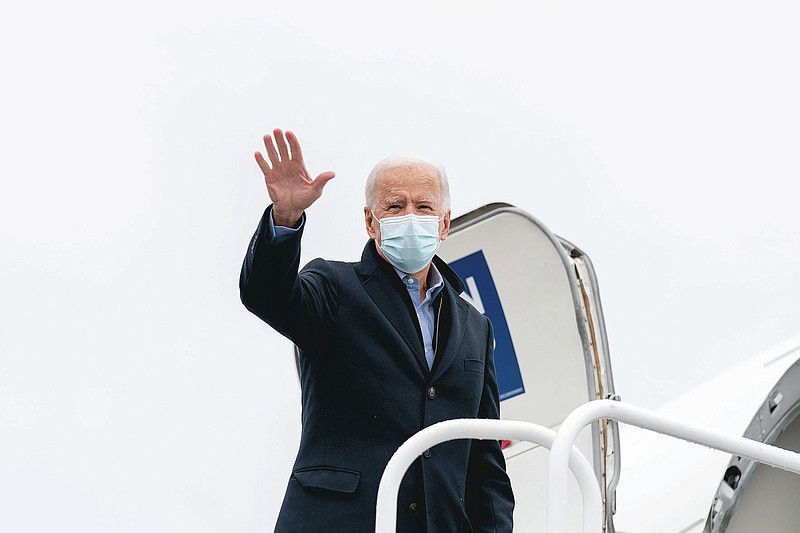 Biden tax plan would not raise taxes on majority of Americans

THE FACTS: A popular but false post on Facebook claims, "By reversing the tax cuts @realDonaldTrump signed into law, Joe Biden would raise taxes on 82% of Americans." The quote is attributed to Ronna McDaniel, chairwoman of the Republican National Committee, who made similar inaccurate claims at the party's convention in August.

In fact, Biden says he won't raise taxes on anyone making less than $400,000, which translates to a small portion of American households. "If you're looking only at individual income taxes and payroll taxes, we find that about 2 percent of all families would see their taxes go up directly under the Biden plan -- almost all of them in the top 5 percent by income," John Ricco, a senior tax analyst at the University of Pennsylvania's Penn Wharton Budget Model, said.

Biden has also proposed repealing part of Trump's corporate tax break. Trump lowered that tax rate from 35% to 21%, and Biden has proposed raising it to 28%.

The false social media posts about Biden raising taxes on 82% of Americans appear to misstate the Penn Wharton Budget Model's analysis of how a corporate tax increase will impact the country.

Ricco said the model predicts that 82% of families will be affected long-term by an increase in corporate taxes, but not because their individual taxes would go up. "Instead of seeing their taxes go up directly, those additional families are paying the corporate tax hikes in the form of lower investment returns or lower wages over time," Ricco wrote.

For the bottom 90% of American households in terms of income, the Penn Wharton Budget Model predicts the passed down costs of the corporate tax increase in the future would average between $25 and $690, depending on income.

But for those same households, the model found that tax credits proposed in Biden's plan would more than offset those costs on average.

False posts spread about ballots without signatures in Miami-Dade County

CLAIM: In Florida's Miami-Dade County, 23% of mail-in ballots have been rejected for missing signatures.

THE FACTS: The correct number is about 0.5%. About 2,265 of the 433,235 mail-in ballots submitted to the Miami-Dade County Elections Department by Thursday morning were flagged for rejection because of missing signatures, according to Robert Rodriguez, assistant deputy supervisor of elections for the department.

Another 212 had mismatched signatures. The erroneous 23% figure was shared widely on Twitter. "Miami Dade reporting 23% of early ballots being REJECTED for missing signatures," wrote one Twitter user in a post that was retweeted more than 4,600 times on Thursday and later deleted.

Actor and activist George Takei shared a similar tweet with the false information on Thursday.

It's unclear what fueled the false claims around the number of ballots without signatures, but they surfaced after an opinion article published in the Tampa Bay Times on Oct. 16 pointed out a different discrepancy related to Miami-Dade County ballots.

"Although Miami-Dade County accounts for only 7.2% of mail ballots cast by Florida voters, it accounts for nearly 23% of the state's mail ballots received without signatures," the article said. Those numbers were current as of Oct. 16, according to Daniel Smith, a political science professor at the University of Florida and one of the article's authors.

As of Thursday, he said, Miami-Dade County accounts for 10.3% of the state's total ballots and about 1 in 4 of the state's ballots with missing signatures. Smith said Miami-Dade County may be overrepresented among counties for ballots without signatures because it is home to many naturalized citizens from around the world who may have difficulty reading voting instructions in the languages provided.

However, social media users spreading the recent false claims are "completely misrepresenting" those numbers, Smith added. There is still time for voters in Miami-Dade County or elsewhere in Florida to correct missing or mismatched signatures on their mailed ballots.

Election officials notify voters whose signatures are missing or don't match, and any such voter can complete a cure affidavit and return it to their county elections department by 5 p.m. on Thursday, Nov. 5, according to state officials.

Harris did not violate campaigning laws in Ohio

THE FACTS: Ohio law prohibits engaging in any kind of election campaigning within 10 feet of any elector in line to vote and within 100 feet of the polling site entrance.

Harris did not violate this law when she made an Oct. 24 appearance outside the Cuyahoga County Board of Elections in downtown Cleveland where voters were lined up to vote, election officials said.

Under Ohio law, two small U.S. flags are placed 100 feet from the entrance at polling locations. These flags act as a barrier for the neutral zone where campaigning is prohibited. Video footage shows Harris standing on East 30th Street surrounded by Secret Service agents addressing voters standing in line.

According to county election officials, Harris didn't violate Ohio electioneering laws. "The Director and several CCBOE staff were outside during the majority of her stop and witnessed no violations of Ohio's electioneering laws," the office said in a statement.

"Senator Harris did not come onto CCBOE property."

In addition, police officers were on site to manage traffic and the flow of voters. They also assist staff with enforcing the neutral zone around the polling site. No assistance was needed by the officers during Harris' visit, election officials said.

Posts online showing video of Harris outside the polling site suggest she broke the law by standing outside and talking to voters. "Here's video of Kamala Harris committing a crime - campaigning at a polling place," one Twitter post said.

Sabrina Singh, Harris' press secretary, confirmed Harris stood behind the boundary while talking to voters. "Senator Harris enjoyed visiting Cleveland on Saturday to get out the vote, including stopping at a polling location to greet voters, where she stood behind the 100 foot boundary line beyond the neutral zone."

Delaware mansion in photo is not owned by Biden

CLAIM: Photo shows "Biden's huge Delaware mansion," one of the largest in the state.

THE FACTS: A Facebook post circulating widely on Tuesday falsely claimed a grand mansion in a suburb of Wilmington, Del., belongs to the Democratic presidential candidate.

"Biden's huge Delaware mansion, one of largest in the state!" read the caption on the post, which had been viewed more than 169,000 times by Tuesday. The photo showed an immense driveway leading up to a sprawling stone estate.

A reverse-image search reveals the pictured home is a nearly 21,000-square-foot property in Greenville, Del., that's currently on the market for an asking price of $8.6 million. It's probably one of the largest houses in the state, according to Rory Burkhart, a realtor for the property.

But it doesn't belong to Biden, he said.

The Bidens call a different home in Wilmington their main residence. The family also has a vacation house in Rehoboth Beach. This isn't the first time untrue claims have emerged about the former vice president's real estate ventures.

The AP debunked posts earlier this month falsely claiming Biden lived in another mansion in Wilmington. Biden did buy that property for $185,000 in the 1970s, but he sold it in 1996 for $1.2 million.

Joe Biden has not stopped campaigning in person

THE FACTS: With just over a week to go until the U.S. presidential election, social media users and conservative news sites were falsely claiming the Democratic candidate was done with in-person campaigning.

In fact, Biden had several in-person campaign stops planned as the posts circulated, including a trip to Georgia on Oct. 27 and a trip to Florida on Oct. 29.

President Donald Trump and his supporters have frequently mocked Biden for holding events online during the pandemic and for taking time off the campaign trail to prepare for the presidential debates.

Some news stories sharing the false claim cited a tweet from JT Lewis, a Trump supporter and gun rights activist who lost a brother in the Sandy Hook Elementary shooting in Newtown, Conn., in 2012. Lewis tweeted without evidence Sunday that Biden said he wouldn't do any more in-person campaigning for the remaining nine days until the election. That tweet was later deleted.

Flu cases are not down 98% globally

CLAIM: New data shows flu cases are down 98% around the globe.

THE FACTS: Social media posts making this claim are providing incomplete information, relying solely on data from countries in the Southern Hemisphere like New Zealand and Australia.

The Northern Hemisphere has yet to experience its full flu season.

But while the claim isn't true, there is some good news to be found here. Experts say that extensive measures taken in these countries from mask wearing, lockdowns and social distancing have contributed to low flu numbers this year. While some posts online did not cite evidence for the figures, others pointed to newly released data from the World Health Organization to suggest that flu cases are down by 98% around the world.

The WHO has not said that.

In its latest influenza update based on flu cases reported from Sept. 29 to Oct. 11, WHO found that global influenza numbers are lower than expected for this time of year. "Although the southern hemisphere seems to have been largely spared, we are still very concerned about the northern hemisphere influenza season just starting," Dr. Margaret Harris, a WHO spokeswoman, said.

Medical professionals in the U.S. have been warning of a "twindemic," an overlap of influenza and covid-19, which have similar symptoms. "In the areas where people properly wear a proper mask, we will see very low rates of covid-19 and influenza," said Dr. Gregory Poland, infectious diseases expert and head of vaccine research at the Mayo Clinic. "In the areas where people are not compliant with mask wearing and distancing guidelines, we will see both diseases, with covid-19 more prominent because of its inherent greater infectiousness."

In New Zealand, where there was a strict approach to the pandemic, officials reported 25 coronavirus deaths in a country with a population of about five million. Officials there have been applauded for their handling of the coronavirus pandemic. The country took early action against the virus and has worked to almost eliminate community transmission.

"The efforts that were undertaken to reduce the spread of SARS-COV2 were also effective at reducing the flu," said Dr. Edward Belongia, director for the Center for Clinical Epidemiology & Population Health at the Marshfield Clinic Research Institute, in Wisconsin. "They are both respiratory viruses that spread in similar ways."

Medical experts like Belongia warn the U.S. has not initiated steps like mask wearing and lockdowns on the same level as Australia and New Zealand to control the pandemic so the flu remains a large concern.

"Flu could be a very real problem again this year as it was last year," Poland said. "Don't neglect your flu vaccine." 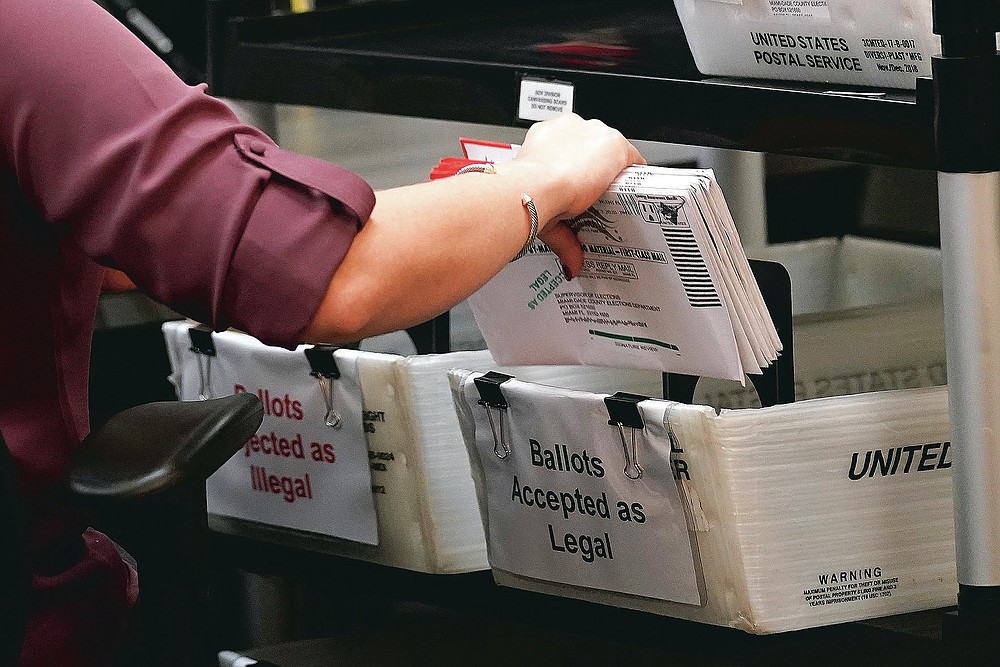 FILE - In this Oct. 26, 2020, file photo, an election worker sorts vote-by-mail ballots at the Miami-Dade County Board of Elections, in Doral, Fla. On Friday, Oct. 30, 2020, The Associated Press reported on stories circulating online incorrectly asserting that 23% of mail-in ballots have been rejected for missing signatures in Florida’s Miami-Dade County. The correct number is about 0.5%. (AP Photo/Lynne Sladky, File) 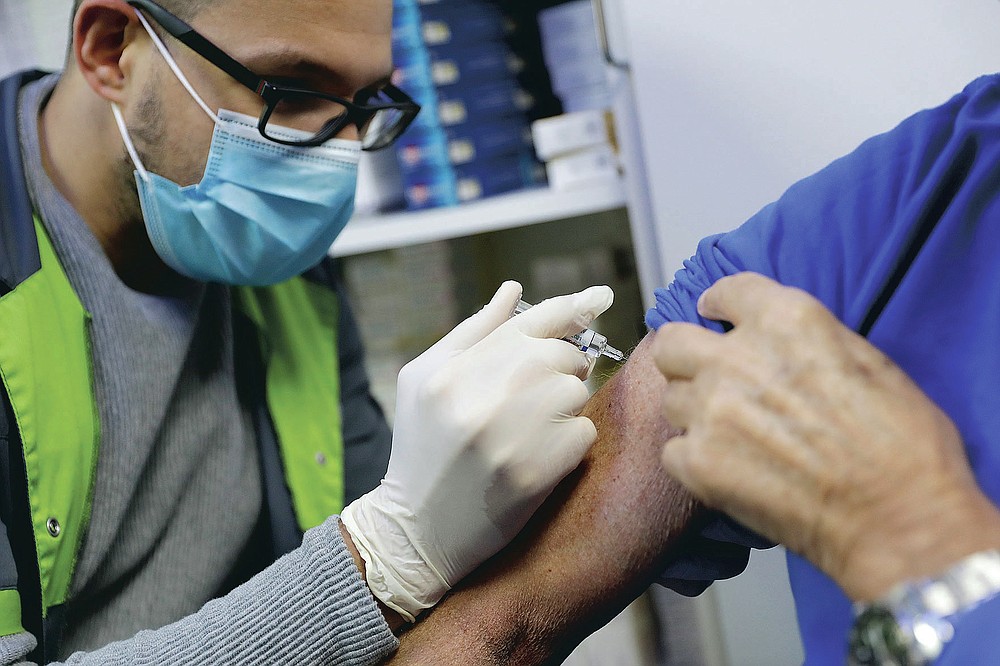 FILE - In this Wednesday, Oct. 14, 2020, file photo, a pharmacist administers a flu shot in a drugstore in Paris. On Friday, Oct. 30, 2020, The Associated Press reported on stories circulating online incorrectly asserting that new data shows flu cases are down 98% around the globe. Social media posts making this claim are providing incomplete information, relying solely on data from countries in the Southern Hemisphere like New Zealand and Australia. The Northern Hemisphere has yet to experience its full flu season. (AP Photo/Lewis Joly) 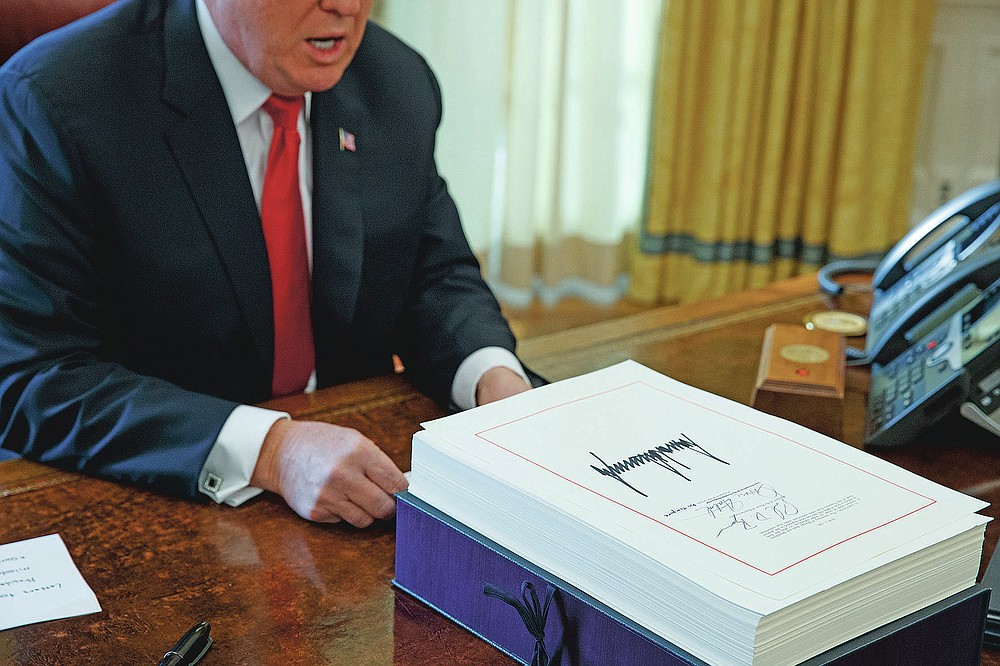 FILE- In this Dec. 22, 2017, file photo President Donald Trump speaks with reporters after signing the tax bill and continuing resolution to fund the government, in the Oval Office of the White House in Washington. On Friday, Oct. 30, 2020, The Associated Press reported on stories circulating online incorrectly asserting that by reversing Trump’s tax cuts, Democratic presidential nominee Joe Biden would raise taxes on 82% of Americans. Biden says he won’t raise taxes on anyone making less than $400,000. (AP Photo/Evan Vucci, File)
ADVERTISEMENT