In quiet contemplation, silence can be a source of strength in these trying times by Francisca Jones | October 31, 2020 at 3:27 a.m. 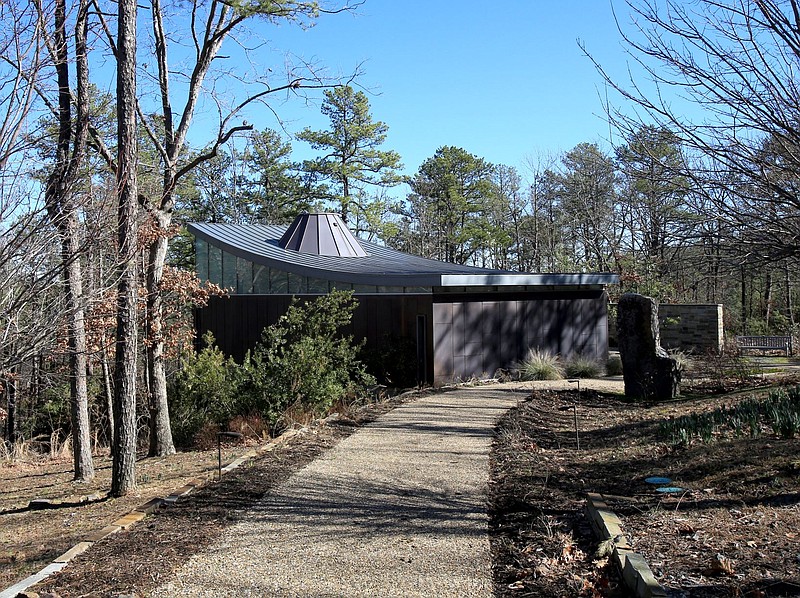 The Arkansas House of Prayer, seen here from its exterior, has been holding remote sessions of silence and meditation online until recently, when the Interfaith Center began hosting the series “Growing in Spiritual Literacy” on Zoom. Rev. Susan Sims Smith, its founder, is among the faith leaders helping to provide guidance on meditation and practicing silence during the coronavirus pandemic. (Arkansas Democrat-Gazette file photo)

As a member of the Roman Catholic order Sisters of Mercy, Sister Deborah Troillet, an apostolic nun, is devoted to being out in the community serving others.

There is a quieter, more contemplative side to being a sister of the religious order as well, and it's where Troillet's role as executive director of the Arkansas House of Prayer comes into play.

A ministry of and on the grounds of St. Margaret's Episcopal Church in Little Rock, it's described as "an interfaith haven, set apart in nature," and is dedicated to providing people with a space to practice silence in meditation and contemplative prayer.

During the coronavirus pandemic, the physical space that is the Arkansas House of Prayer has seen fewer visitors -- it's currently limited to those who have obtained key fob access in advance -- but people are coming to meditate or pray in silence no matter their faith, and the house has increased its sanitization of surfaces, asking that visitors wear masks and wipe any surfaces they touch. Its outdoor labyrinth and walking path are still open to the public.

Congregations have transitioned to online or outdoor services to practice their faith during the year's ongoing pandemic, heightened political division and social unrest in the wake of continued police brutality. For the House of Prayer, making interfaith silence programming available online was necessary to help those practicing their faith through quiet contemplation or prayer.

"As we all know, the climate in our country is such that anything we might do to counter the negative energy that's out there right now among us and in us, anything that we can do to ground that, helps the whole world, I think," Troillet said.

The Interfaith Center, a joint ministry of St. Margaret's and the Institute for Theological Studies at St. Margaret's, has among its programming this year an interfaith workshop on silence led by Sophia Said, its executive director.

Said, who is Sufi Muslim, said during the workshop that the Sufi branch of Islam emphasizes silent meditation and contemplative prayer. Said noted that although worship in the Muslim faith emphasizes prayer, "silence is the framework if the background in which the prayer happens."

Silence, Said told viewers, helps a person connect with themselves, the universe and God.

"If you really want to be truly connected to [your] truest self, then we have to spend time in silence," she said.

According to Said, the Koran, Islam's holy book, also relates that God's attributes manifest themselves in the universe, and that silence is a way for a person to connect with the universe surrounding them.

"It could be flowers and birds, or the sky and squirrels, or people or you and me or my friends," she said. "Those signs are embedded and hidden in them, but once somebody spends time in silence, they develop a keen awareness to reflect upon this world, and then they can experience God or the divine within, and thus this universe becomes a permanent source of spiritual guidance for them -- so we connect with ourselves and we connect with the universe in silence."

ONENESS WITH THE DIVINE

Rev. Susan Sims Smith, founder of the Arkansas House of Prayer and an Episcopal priest, also described experiencing a oneness with the divine in silence.

"Sitting in silence gives you a chance to connect with the Atman [in Hinduism, the real self], and Christians would call it the Christ within," Sims Smith said. That connecting, she said, "doesn't change how you live in the world ... but you are helping from a place of service, not of neediness."

Sims Smith has a regular practice of silence; her advice to those new to the experience is to begin with 10-20 minutes of silence a day, then build toward a practice of 30 minutes a day -- or 30 minutes twice a day -- and find a way to meditate that works for the individual.

"Any amount [of silence] on a regular basis will eventually be transforming," she said.

THE PRACTICE OF SILENCE

"Children love meditating, if you just give them a role model," she said, and suggested a shorter period of time -- five minutes or so -- to get them started.

Sims Smith noted that she hosted a brief talk on intergenerational meditation that can be found on the Interfaith Center's website as a guide.

"Little ones have so much information coming at them, they never get a chance to be quiet ... and so this allows them to get in touch with themselves and have a little time without all the stuff bombarding them," Tuck said.

Tuck, who in Jewish, practices Mussar, the study and practice of personal development through working on one's middot, or soul traits, in a Jewish context. Mussar requires some time spent in silence and contemplation, and Tuck noted that in the practice of Mussar, silence is considered as necessary to the soul for insight as sleep is to the body.

That includes inward and outward silence -- the latter of which is possible through taking small actions, such as driving without the radio playing, or walking without portable music.

"If you don't have silence, how are you going to listen to that still small voice that brings spiritual insight and wisdom?" she said. "You can only hear that voice in the silence -- not just the outer silence, but the ... inner silence of the soul."

Tuck said Alan Morinis, founder of the Mussar Institute, has described silence as "a pregnant state out of which can emerge worlds of possibilities we have no hope of knowing, so long as our lives are overfilled with words and noise."

Sims Smith said that for Jesus, silence was a source of strength, and emphasized that His experience reflected people's need to experience it themselves.

"We certainly think of Jesus as going out in the wilderness for 40 days and 40 nights to pray, to be strengthened -- transformed before a whole new phase of His ministry -- so He is our role model and our beloved, and silence was where He derived so much of His strength," Sims Smith said. "He prayed the night before He died, but I think that in addition to that, the 40 days in the wilderness is a tremendous example of us needing silence for our own strength and transformation and connection to God."

Visit the Arkansas House of Prayer at arkansashouseofprayer.org and the Interfaith Center at theinterfaithcenter.org.

A full episode of "Seeking Silence" featuring Sister Deborah Troillet on the J.O.Y. Podcast by St. Margaret's Episcopal Church in Little Rock can be found at bit.ly/2TwFMQP. 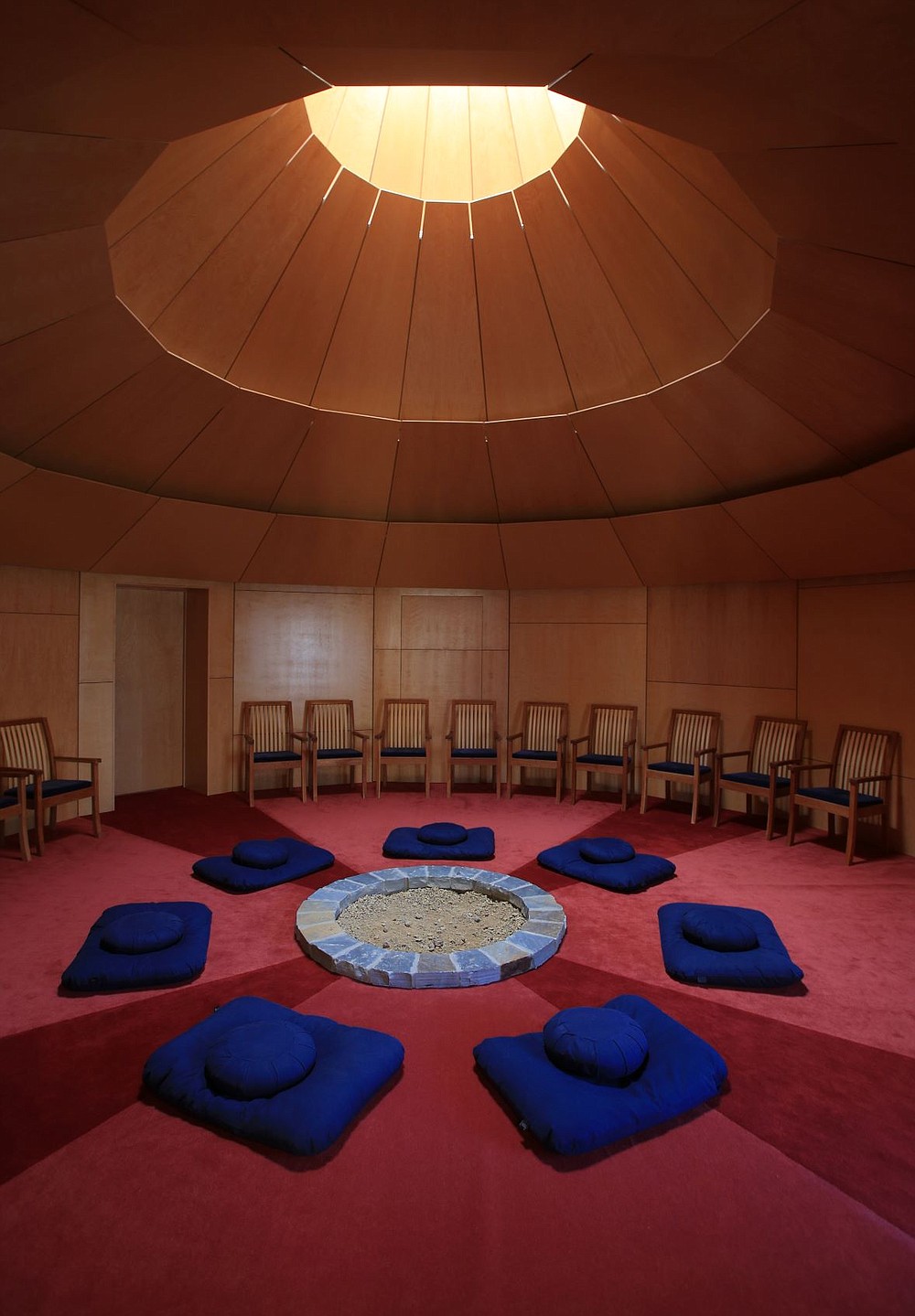 The Arkansas House of Prayer, which is open to people of all faiths, is on the grounds of St. Margaret’s Episcopal Church in Little Rock. Its remote programs during the coronavirus pandemic have included a silence and meditation practice at noon on Wednesdays. (Arkansas Democrat-Gazette file photo)
ADVERTISEMENT