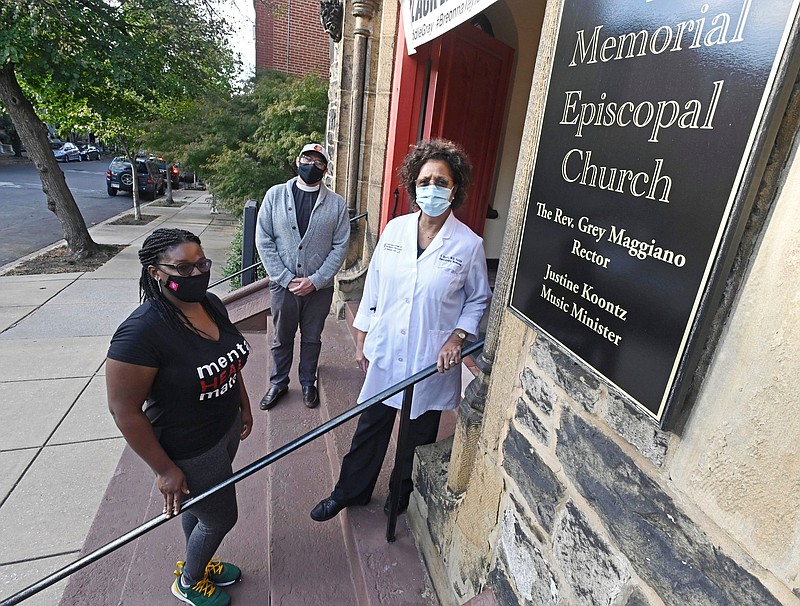 Rev. Grey Maggiano (center), rector of Memorial Episcopal Church in Baltimore, stands with Shannon McCullough (left) and Dr. Carol Scott. McCullough, Scott and Karen Mercer (not pictured) created Kindred Coaches, to train people to be peer counselors to help others manage their own health and to reduce disparities in health care in disadvantaged neighborhoods. (The Baltimore Sun/TNS/Kenneth K. Lam)

BALTIMORE -- Diabetes, heart disease and other ailments had been disproportionately cutting lives short in the disadvantaged neighborhoods of West Baltimore for decades when the coronavirus pandemic emerged and piled on.

A group of Episcopal Church members found that to be something of a last straw.

Buoyed by the recent social justice movement, three Black women from the church with backgrounds in health care are launching a program to train peer coaches who can guide, motivate and otherwise help the largely minority populations in some hard-hit neighborhoods figure out how to live healthier.

"We need people in the community who are not talking at us but talking with us," said Dr. Carol Scott, an emergency room physician and one of the co-directors of the program called Kindred Coaches. "We need people who can provide facts and information and can inspire."

She said people who are healthier have a better chance of weathering the coronavirus or avoiding it altogether -- as well as other diseases that the Baltimore Health Department has said produces a 20-year gap in life expectancy between the city's most well-off and worse-off neighborhoods.

Scott said her faith led her to help organize the program that begins training coaches this week, even though the coaches and those they coach do not have to be Episcopalian or any religion.

Peer coaching isn't a new idea, she and others in the program say. This program follows others in Baltimore that have had some success tackling the intractable health problems of violence and overdose deaths.

And public health officials have turned increasingly to the faith community, with deep connections in Baltimore neighborhoods, to get residents such things as regular blood pressure checks, fresh food or health insurance.

Scott said she saw her church, Memorial Episcopal Church in Bolton Hill, as a natural place to start the program. The church brought in the Episcopal Diocese of Maryland and the Union of Black Episcopalians to broaden the impact.

In Maryland, Black people make up a disproportionate 41% of the deaths from coronavirus, the disease caused by the coronavirus. Baltimore City and Prince George's County, with large Black populations, have some of the state's highest rates of infection.

A recent study from Johns Hopkins University researchers offers further evidence that socioeconomic factors and geography have played a role during the pandemic. The researchers compared data from socioeconomically challenged ZIP codes in seven states including Maryland to data from less burdened ZIP codes and found the risk was far higher in challenged areas nearly across the board.

The study, published in Frontiers of Public Health, surmised that communities comprised largely of racial minorities and economically challenged households were more likely to be exposed to the coronavirus because they have low-wage essential jobs, including in health care. The workers also are more likely to live in overcrowded housing where it's harder to keep a distance.

Such results do not surprise Scott, who co-wrote a 2003 article in Academic Emergency Medicine about how minorities tap medical care differently due to such factors as lack of access to care or insurance or strong relationships with doctors.

It's a reason she became a coach herself through Wellcoaches, a health and wellness coach training business. She tapped her own relationship with Margaret Moore, the company founder and chief executive officer, who agreed to provide trainers at no cost to Kindred Coaches.

Moore had been moved by the social justice efforts around the country and already had been thinking about how she could help. She reached out to Wellcoaches' Black coaches across the country to recruit for the Baltimore program.

"We trained 1,000 coaches a year," Moore said. "We can scale. Baltimore will be the pilot, but we want to take this around the country."

She said the coaches know how to facilitate conversation where people "chose their own way; figure out what motivates them."

Moore considers obesity the biggest scourge, leading to diabetes, high blood pressure and other conditions. Coaches would work on "changing people's mindsets and behaviors by helping them figure out why it's important to make a change."

BE A ROLE MODEL

For some, it's not wanting to end up a burden on their kids, others want to be a role model or feel less lousy. Others just "want to look better in their jeans," she said.

Then, Moore said, the coaches will continue to use that motivation to keep people on track, working with individuals or groups for months or longer.

Rev. Grey Maggiano, rector of Memorial Episcopal Church, said he was struck by the disparities that exist just blocks apart near his church. He believes a spiritual-based coaching team could make a big impact in the West Baltimore neighborhood where he lives and works beyond the pandemic.

"Whenever grant money is released around a crisis, often the money disappears when the crisis goes away," he said. "Here we're trying to build a network of peer coaches who can continue to provide resources and support that can be activated when something else happens but also has continuing resources."

Much of the program is being done on a volunteer basis, with Maggiano looking for small grants to pay some additional speakers during training and produce public service announcements.

Wellcoaches also said it is working generally on getting coaches paid by establishing official billing codes for coaching and getting insurers to provide reimbursements. Then coaching can be a full-time career rather than volunteer work, cementing the availability of the service.

Kindred Coaches' first cohort of about 20 coaches is beginning a series of twice-weekly online sessions this week to learn how to direct small groups or individuals to take charge of their own health.

Linda Johnson-Harvey was among those signing on to become a coach.

She is already doing work as an apostle at Fragrance of Faith Ministry. She has worked to provide care to those suffering trauma and provide fresh food where access is limited. Training with Kindred Coaches will "expand my toolbox," she said.

Since the social justice movement took off after the death in May of George Floyd, a Minneapolis Black man in police custody, she has felt a clarion call to address racial inequities. With the pandemic, she said that must include addressing health care inequities.

She views coaching as a means to build trust in disenfranchised communities who have not felt welcomed or comfortable seeking medical care. Many have felt they couldn't afford or access care.

"We'll look you in the eye and say I'm here and how can I help you walk out and take the next step to the doctor's office or whatever you need to do," Johnson-Harvey said.

"We'll help people feel safe, valued and helped," she said. "This at a time when we're dealing with two major health things, health disparities and inequities -- both heavy hitters. It's time."