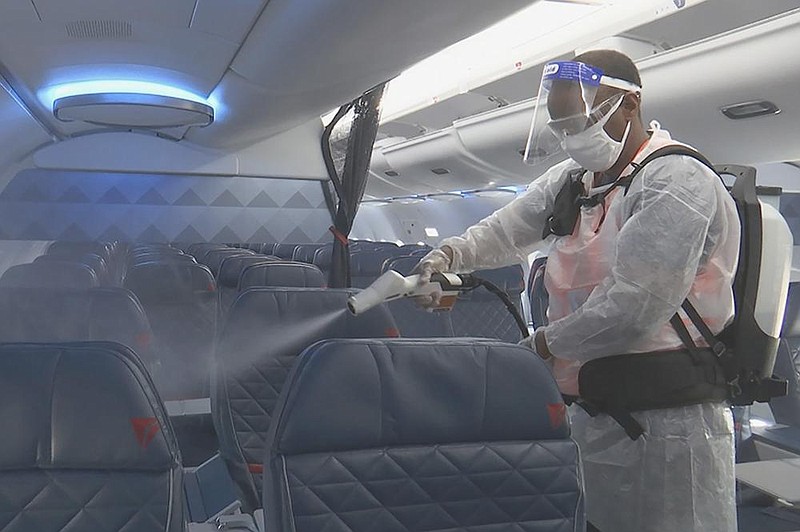 Melaku Gebermariam uses an electrostatic sprayer in July to disinfect the inside of a Delta Air Lines jet parked at Ronald Reagan Washington National Airport in Arlington, Va. (AP/Nathan Ellgren)

United and Delta airlines have recently begun boarding flights from the rear to the front in a bid to minimize close contacts between passengers that could spread covid-19.

Yet new research shows it may do just the opposite: U.S. scientists have found boarding planes starting with the back rows increases the time people spend clustering in aisles to load bags in overhead bins before taking their seats.

Boarding procedure is just one example of how airlines are struggling to make flying safe during the pandemic, and lure back passengers. Carriers are also instituting inconsistent policies on leaving middle seats vacant that aren't backed by science. There are huge gaps in data and research, and the Trump administration has declined to set health-related rules for airlines.

"There is an abundance of expert opinions and there is a scarcity of good data," said Byron Jones, an engineering professor at Kansas State University, one of the small coterie of researchers specializing in cabin air safety.

Airline chiefs have issued sweeping reassurances to the public, seeking to get people flying again. The U.S. Transportation Department and other agencies in July released guidelines for lowering risks, called Runway to Recovery.

Yet passenger counts have nudged up only slowly as covid infection rates soar in some regions even as they ebb in others, and news accounts documented the occasional passengers who refuse to cover their faces. Planes carried about 30% of last year's loads in the U.S. in the past week, Transportation Security Administration data shows.

According to a review of scientific studies on the potential for infection on a jetliner, interviews with leading researchers and a review of airline policies:

• Several studies have presented evidence that the novel coronavirus is known to have been transmitted to passengers on planes, though such cases are few and reflect instances in which masks weren't worn or had been removed.

• Estimates of the infection risks of flying vary, and researchers say it's difficult to draw conclusions with confidence regarding a newly discovered disease and changing safety practices.

• The U.S. government has failed to develop aviation preparedness plans for communicable diseases required by an international treaty, a watchdog agency recently found.

The result is that the choices for many people contemplating flying during the pandemic aren't simple or obvious.

Take policies to leave middle seats open on planes. Research has shown that spacing passengers out reduces close contacts that could spread the virus, but there's no data on how such policies affect actual risk, especially when masks are being worn.

The air fed into the plane's cabin has passed through filters that are equivalent to those in hospital operating rooms, so there appears to be little danger of infection from recirculated air, said Qingyan Chen, an engineering professor at Purdue University in Indiana who's written extensively on disease transmission on planes.

But that's not the whole story for someone traveling in the close confines of a commercial flight, where it's impossible to stay socially distanced and contact occurs for hours at a stretch.

"The risk is in the cabin before the air is recirculated," Chen said. "When you talk and cough, you release these droplets. It will go to the passenger sitting next to you before it's filtered out by the air-conditioning system."

A 2018 study published by the National Academy of Sciences found a "high probability" that people seated within one row of a passenger with influenza would become infected on a transcontinental flight. The chances of transmission to others on the plane were "very low," but still possible, it said.

That study also didn't look at how wearing masks might protect people, so it's difficult to extrapolate the results to the current outbreak, said Howie Weiss, a co-author and professor of biology and mathematics at Pennsylvania State University.

"Clarity is going to be slow going," Weiss said.