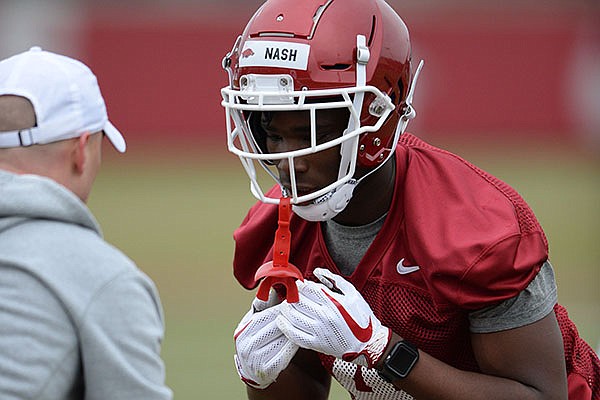 Arkansas receiver Shamar Nash takes part in a drill Friday, March 1, 2019, during practice at the university practice facility in Fayetteville.

FAYETTEVILLE — University of Arkansas freshman receiver Shamar Nash has elected to opt out on the 2020 football season, sources have told the Arkansas Democrat-Gazette

Nash confirmed the decision in a Twitter post on Tuesday, writing, in part, “COVID has been very relevant in my life since May of this year and with the recent passing of my grandmother due to COVID my family and I felt there wasn’t any reward worth the risk of continuing to participate in football this fall. I wish my team and the entire Razorback nation the best of luck this fall.”

Nash, a 6-3, 215-pounder from Memphis, would be missing a second consecutive season of competition by opting out, as he redshirted last season.

Nash, who finished his prep career at IMG Academy in Bradenton, Fla., was a four-star prospect and part of the Razorbacks’ big crop of wide receiver signees in 2019 along with Treylon Burks, Trey Knox and TQ Jackson. Jackson entered the transfer portal in the winter and landed at SMU.

Nash is the second known Razorback to accept the option that has been given to all college football players in light of the covid-19 pandemic. Players will not lose a season of eligibility if they choose not to play this fall.

Senior offensive lineman Chibueze Nwanna, who had not cracked the two deep on the depth chart, has also opted out.