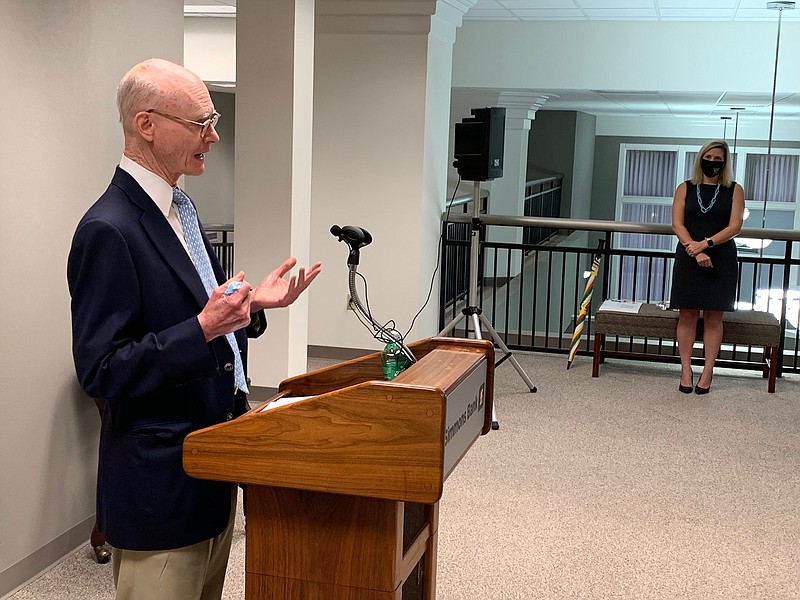 PINE BLUFF -- Gannett has sold The Pine Bluff Commercial to the Arkansas Democrat-Gazette and its parent company, WEHCO Newspapers Inc. of Little Rock.

Hussman said on Sunday that he was concerned that Gannett might have to close the 139-year-old newspaper.

[Video not showing up above? Click here to view » https://www.youtube.com/watch?v=eiOZBLzhm-4]

By purchasing the paper, Hussman said he can save money on printing costs and invest more in journalism.

The Commercial will consist of four pages inside the Arkansas section of the Democrat-Gazette seven days a week, Hussman said at an announcement event Monday in Pine Bluff.

The Commercial will be published in a digital replica format seven days a week as part of the Democrat-Gazette. The digital replica is identical to the print edition but delivered on an iPad or other computer device.

The combined newspapers will also be printed and delivered to subscribers in the Pine Bluff area through Oct. 12. After that time, subscribers will receive a print edition only on Sundays as part of the Sunday Arkansas Democrat-Gazette.

"I think it's absolutely wonderful that we have this level of a transition, that we're not losing our paper altogether, like a lot of communities," said Pine Bluff Mayor Shirley Washington.

Hussman said it's been 12 years since WEHCO has bought a newspaper.

"What we're doing here today is really unique in American newspaper publishing," he said Monday. "What we have done so far with the Arkansas Democrat-Gazette, the Northwest Arkansas Democrat-Gazette and also the El Dorado News-Times, is we have switched to this seven-day-a-week digital replica of the paper and we deliver a paper on Sundays. But we have never bought a newspaper intending to do this. And the reason we're doing this is we think this will be great for Pine Bluff. Actually, we think it will be good for our company.

"But if this works in Pine Bluff, this is going to be great for community journalism in America because it's going to show a model and a path forward for other newspapers to be sustainable and survivable."

Hussman said the Commercial has lost a lot of subscribers.

"In fact, over the last five years, they've lost more subscribers than they have today," he said.

In the deal, WEHCO also gets the Commercial's name. He said it's important to continue publication of such a well respected newspaper.

"We are pleased that The Pine Bluff Commercial, a newspaper with a great legacy and tradition, has found a new home with WEHCO and potentially a sustainable business model for many years to come," said Jay Fogarty, senior vice president of corporate development for Gannett.

In his letter to subscribers, Hussman said he's convinced the only way for the Commercial to continue daily publication is with a significant investment in local reporters and journalism, and to provide each subscriber with the full Democrat-Gazette.

The Commercial will have a news staff of four people led by Byron Tate, who has worked at the newspaper three times over his career. His last position was as both editor and publisher until June 2016.

"When social media is used to stay in touch, that's one thing, but when it's your source of news, well obviously there can be problems ..." Tate said at the event in Pine Bluff on Monday.

"Our goal is to give you something real and truthful, something that holds up to scrutiny," said Tate. "The Pine Bluff Commercial has historically been a newspaper that prides itself on having high journalistic standards and providing readers with a first-class local news product, emphasis local. With this announcement we are planting our flag once again to be that newspaper."

"Byron has the journalism experience and knowledge of Pine Bluff to make this a really successful product," Eliza Hussman Gaines, managing editor of the Democrat-Gazette, said at the Pine Bluff event. "He has a deep knowledge of the city and he will want to dig beyond the surface of issues in Pine Bluff and celebrate its strength as well."

"They give readers the facts they need to make the best decisions about their lives, their families, their communities and the government," she said. "We are committed to making The Pine Bluff Commercial a vital part of this community. We've made the investment and are excited to give readers a high-quality news product in a digital age.

"But this newspaper will only be successful if the people of Pine Bluff truly see a value in it. So over the next couple of weeks, we urge you to take the time to explore and enjoy the newspaper. We think our commitment to Pine Bluff and the power of local journalism will show."

Mark Lane, president of WEHCO's newspaper division, said the three newsroom employees of the Commercial were offered jobs at other Gannett papers. Two of them were also offered jobs with the WEHCO-owned Commercial.

"A few other non-newsroom employees will stay on Gannett payroll for about 30 days," he said in an email. "There are 13 full-time employees and we will offer several of them a job with the WEHCO-owned Pine Bluff Commercial."

Before being purchased by WEHCO, the Commercial was published and printed five days a week.

"While many newspapers are eliminating some days of publication, we are adding back two days in Pine Bluff so we can cover the news every day," said Hussman. "Due to the collapse of advertising, not just during the covid-19 pandemic, but over the past 14 years, print publication is no longer economically sustainable."

Subscription rates for the Commercial will be $34 a month, wrote Hussman. Some subscribers will see their rates increase by $1 per month until it reaches $34 per month.

Subscribers who want one will be furnished with an iPad free of charge.

In a news release, Hussman said readers have indicated the digital replica edition of the paper is preferable to reading a newspaper's website. One-on-one, in-person iPad training will also be provided to subscribers.

"They not only get the exact same information in the same place they found it in print, but even more information in a more readable format by being able to enlarge type, as well as additional features like expanded photos, videos and the ability to receive the paper earlier and anywhere," Hussman said in the release.

Under terms of the agreement, a new company, Pine Bluff Commercial Inc., is being established as a wholly-owned subsidiary of WEHCO Newspapers Inc.

"Our success is only as good as the people who know about what we're doing," he said. "And we have been having a difficult time getting that message out. With the strength and the gravitas of the Democrat-Gazette coming in, that message can be told accurately and continue to get the attention of the citizens of the state of Arkansas as well as locally to know that Pine Bluff is coming back. We're coming back stronger than ever."

Laurence Alexander, chancellor at the University of Arkansas at Pine Bluff, was a newspaper reporter at The Times Picayune in New Orleans.

After the event in Pine Bluff on Monday, he was asked about the change at the Commercial.

"I think it's a great day for Pine Bluff, for the citizens of Pine Bluff and particularly for the future of Pine Bluff," said Alexander. "Newspapers serve a very important role in the community. They're some of the oldest media that you have in many cities across the country. And they have sustained, even through changing times -- they've just transitioned to alternative formats."

Alexander said he was impressed that the Democrat-Gazette planned to expand coverage of Pine Bluff.

"If you want to expand an economy, you need to expand the flow of information from the business community to readers and consumers," he said.

On Monday, Edmond Freeman III, whose family owned The Pine Bluff Commercial from its founding in 1881 until it was sold to Donrey Media in 1986, said he was pleased to hear of the acquisition of the newspaper he oversaw as publisher from about 1960 until 1986.

"A community needs its newspaper. Local news is extremely important," Freeman said. "Without it, people don't know what they need to know about the things that affect them the most. Mr. Hussman has done a great job with the Democrat-Gazette and I'm so glad he's got the Commercial and to hear what he plans to do with it. I wish him all the luck in the world."

Gannett is the largest publisher of local news in the U.S. after recently being acquired by New Media Investment Group Inc., which has owned The Pine Bluff Commercial for five years.

WEHCO Newspapers, Inc. and its predecessor newspaper companies were started by Clyde Palmer in 1909 where he was publisher of the Texarkana Gazette, and the company has remained in the same Arkansas family ownership for over 100 years, with his grandson, Walter Hussman Jr. and his great granddaughter, Eliza Hussman Gaines.

The University of North Carolina recently renamed their journalism school the UNC Hussman School of Journalism and Media and adopted a statement of core journalism values, which will be published on page 2 of The Pine Bluff Commercial every day.

The Pine Bluff Commercial web section is available at https://www.arkansasonline.com/pinebluffcommercial/

Information for this article was contributed by Dale Ellis of The Pine Bluff Commercial.