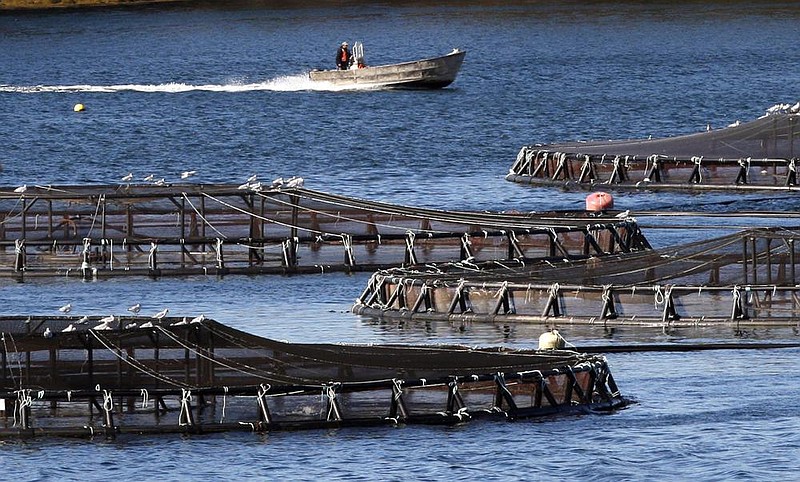 A salmon farmer makes his rounds near floating pens containing thousands of Atlantic salmon in Eastport, Maine, in this file photo. President Donald Trump is hoping to dramatically upscale aqua- culture in the U.S., including expanding to offshore aquaculture.  (AP)

PORTLAND, Maine -- President Donald Trump wants to dramatically expand aquaculture production in the United States, but a coalition of environmentalists believes his plan would be bad for the oceans, unnecessary for food security and difficult to implement.

Trump's bid to grow fish farming is designed to address the so-called seafood deficit, which refers to the fact that nine-tenths of the seafood Americans eat comes from overseas. The seafood trade gap with other countries approached $17 billion in 2017, according to one federal government report.

The president issued an executive order in May that promised broad changes in how the U.S. regulates fish farming. It included provisions to expedite the development of offshore aquaculture in deep federal waters. That sector of the industry has yet to emerge in the U.S., where most aquaculture takes place near shore where farmers grow salmon, oysters and other popular seafood items.

The Trump administration and the aquaculture industry said the order, which is being implemented now, represents common-sense steps to ease the burden of rules on fish farmers. But environmental groups said it threatens to increase pollution and over-development in the ocean at a time when many consumers aren't buying seafood.

"They're trying to somehow connect open-water aquaculture with the need for domestic food. But it just doesn't make sense," said Marianne Cufone, executive director of the Recirculating Farms Coalition, one of several environmental groups that oppose the move. "Why we're seeing it during a pandemic, I don't know, I'm shaking my head."

The executive order gives the nation's regional fishery management councils, which regulate fisheries, six months to recommend "actions to reduce burdens on domestic fishing." One of the order's stated goals is "more effective permitting related to offshore aquaculture and additional streamlining of fishery regulations," with "the potential to revolutionize American seafood production."

The order aims to bring seafood production to the U.S. instead of keeping the nation dependent on other countries, said Paul Doremus, deputy assistant administrator for operations at the National Oceanic and Atmospheric Administration's National Marine Fisheries Service.

"We're a major seafood consuming country and we could be producing more of that seafood internally," Doremus said. "That's the driving force behind the executive order as a whole."

Hallie Templeton, senior oceans campaigner at Friends of the Earth, said it's not the right time to expand fish farming. Seafood is popular in restaurants, and the coronavirus pandemic has caused many to shutter, at least temporarily. Seafood sales to restaurants fell 90% in the early weeks of the pandemic. The industry has since seen an infusion of CARES Act money to help it recover, but continues to struggle.

Templeton called offshore aquaculture "floating factory farms" and said they are more likely to cause pollution in the marine environment than provide sustainable food.

A recent court ruling dealt a blow to the prospects for offshore fish farming. The 5th U.S. Circuit Court of Appeals said in a decision Aug. 3 that federal law granting NOAA authority over fisheries does not also let the agency set rules for offshore fish farms. That scuttled rules that could have regulated fish farms in the Gulf of Mexico.

"Allowing net-pen aquaculture and its environmental harms in the Gulf of Mexico is a grave threat, and the court properly held the government cannot do so without new and proper Congressional authority," said George Kimbrell, Center for Food Safety legal director and a lead counsel in the case.

The prospect of offshore aquaculture has been contentious for years. President Barack Obama also took steps to permit deep water fish farming during his tenure.

The aquaculture industry remains hopeful that Trump's executive order can help pave the way for more fish farming, both near shore and offshore. Paul Zajicek, executive director of the National Aquaculture Association, said the order isn't about eliminating regulations but rather "removing barriers to aquaculture permitting" for farmers.

Some fishing groups have also come out in support of the order. Scot Mackey, director of government affairs for the Garden State Seafood Association, which advocates for fishermen as well as farmers, said the order "will help the industry weather the current crisis and come back stronger."

Neville Crabbe, spokesman for the Atlantic Salmon Federation, a conservation group, said the federal permitting process should be creating land-based aquaculture rather than fish farms in the ocean, let alone offshore.

"It's not clear how locating that production just further away from the coasts would help with things like diseases and parasites and other problems that plague the industry today," he said. 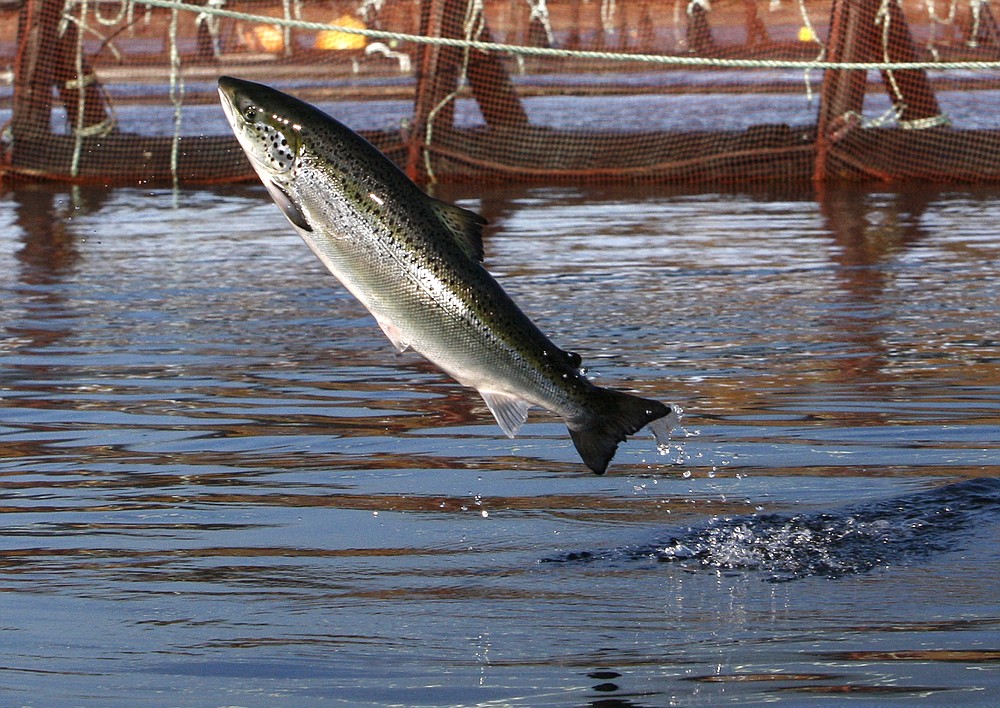 FILE - In this Oct. 11, 2008 file photo, an Atlantic salmon leaps out of the water at a Cooke Aquaculture farm pen near Eastport, Maine. President Donald Trump is hoping to dramatically upscale aquaculture in the U.S., including expanding the long controversial sector of offshore aquaculture. In May 2020, the president issued an executive order that promised broad changes in how the U.S. regulates fish farming. (AP Photo/Robert F. Bukaty, File)
ADVERTISEMENT