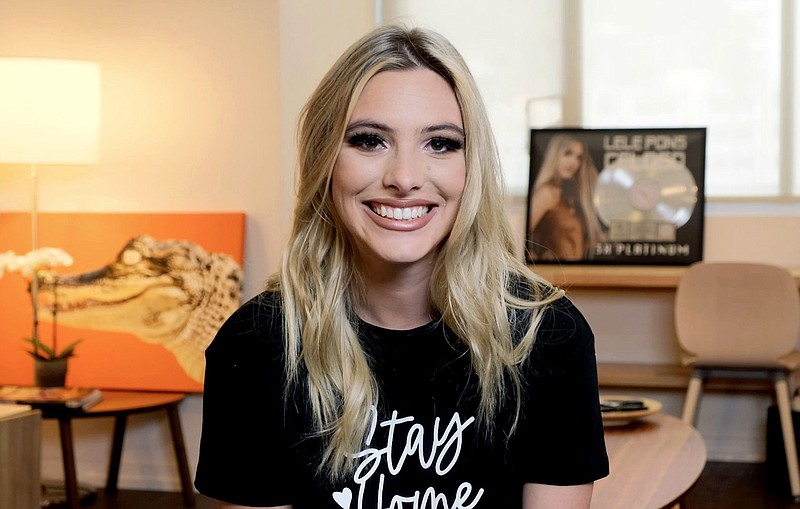 Lele Pons, who signed with Spotify to do her “Best Kept Secrets” podcasts, is shown in a May screen grab. (Getty Images for SHEIN/TNS)

LOS ANGELES — Los Angeles-based influencers Rickey Thompson and Denzel Dion are pros at posting funny videos to their millions of followers on social media platforms. But they've never had their own podcast before.

So when the friends wanted to start one that would discuss relationships, advice and other things going on in their lives, they decided to sign an exclusive deal with Spotify.

"They got what we wanted and we got what they wanted," Dion said.

The deal, which was announced Thursday, is among nearly two dozen original or exclusive podcasts Spotify has signed with social media stars in the last year, including TikTok dancer Addison Rae and singer Lele Pons.

"We want to work with creators across a wide range," said Courtney Holt, Spotify's head of studios and video. "Social media influencers is a great place for us to be looking for new, emerging, established and diverse talent."

He declined to say how much Spotify is paying influencers for these deals, but an industry source said such deals could reach seven figures.

For Spotify, this is another way to attract new audiences to the streaming platform.

"That is the hope of any established creator, that they're bringing their audiences here," Holt said. "We want them to be able to experience them in a way that they wouldn't get on Instagram, YouTube, TikTok or anywhere else."

Spotify, which had 299 million monthly active users as of June 30, makes money through ad-free monthly subscriptions and from advertising on the free version of the service.

To drive even more listeners to its site, the company has been making a big push into the podcast space. The Swedish company has acquired podcast production companies, including New York-based Gimlet Media and L.A.-based firms Parcast and the Ringer. It landed an exclusive podcast with former first lady Michelle Obama.

The streamer's expansion into podcasts will help increase its advertising revenue and potentially offset the amount of money it pays to stream music.

"That built-in marketing, their ability to move their audiences, is powerful," Ben Davis, a partner in digital media at WME, said of social media influencers. "Spotify sees the next generation of podcast listeners and wants to go after that."

Already, Facebook video creator Nuseir Yassin says some of his fans have told him they are listening to podcasts for the first time because of his Spotify podcast, "Nas Talks."

"A lot of my audience who's new to podcasting is joining the podcasting world," said 28-year-old Yassin, who lives in Singapore. "Podcasting is like an American kind of thing. For the rest of the world, it's still a new concept."

Yassin estimates there were hundreds of thousands of people who listened to his first podcast episode.

For social media stars, podcasting has become a popular medium where they can discuss more adult topics and speak for a longer period of time than, say, TikTok's typical 15-second video. It can also increase their value and celebrity if done well, said Eunice Shin, a partner at consultancy Prophet.

Podcasts are also another outlet for influencers to diversify their reach away from the volatility of social media platforms that can change based on algorithms. There has been increased pressure on TikTok stars to expand their audiences outside the app after President Donald Trump signed an executive order that could bar advertising deals with U.S. companies on TikTok.

"It's hugely important to diversify and to create additional touch points with your audience so you're not dependent on one platform," said Davis at WME, which represents Addison Rae. "You're creating a buffer there to allow you to continue to reach your audience no matter what happens to one platform."

Some of the podcasts delve into topics different from what the influencers present on YouTube or TikTok. For example, Addison Rae does dance videos on TikTok and her Spotify podcast, "Mama Knows Best," is about asking her mom for advice. About 1 million people have listened to her podcast on Spotify, according to a person familiar with the matter who was not authorized to comment.

"The podcast shows a different side of us than just being funny," 22-year-old Dion said of his forthcoming podcast with Thompson. "It will be intuitive, educational, informational, personal — I feel like you can't get all that in a video because we're just busy trying to make people laugh."

Spotify's deals with social media influencers are for audio-only podcasts, but the company has rolled out other podcasts with video footage. One of Spotify's most recent high-profile deals was with podcaster Joe Rogan for an exclusive video and audio podcast worth roughly $100 million.

Not all influencers are signing exclusive podcast deals with Spotify. Some are choosing to make them available on Spotify and across many other platforms such as Apple Podcasts.

On Spotify, Pons' "Best Kept Secrets" podcast, where people reveal something they haven't disclosed to their families, launched last week. In the first episode, the topic of sex dungeons comes up.

"Some of the things I'm going to say you've never heard of me talking about, like sexual stuff," 24-year-old Pons said. On Spotify, "I feel good to talk about that because this is just me being real and it's not behind the screen just doing physical stunts or playing a character."

Pons' relationship with Spotify promoting her music was in part why she chose to go to the streamer with her podcast, said Sam Shahidi, chief creative officer of Shots Studios, Pons' management firm. Unlike Apple or Google, which offer separate apps for podcasts, Spotify has its music and podcasts all in one app. That makes it easier for Pons' music fans to also search for her podcast, Shahidi said.

"That's the best way we can manage both the podcast strategy and her career and her music strategy," he added.