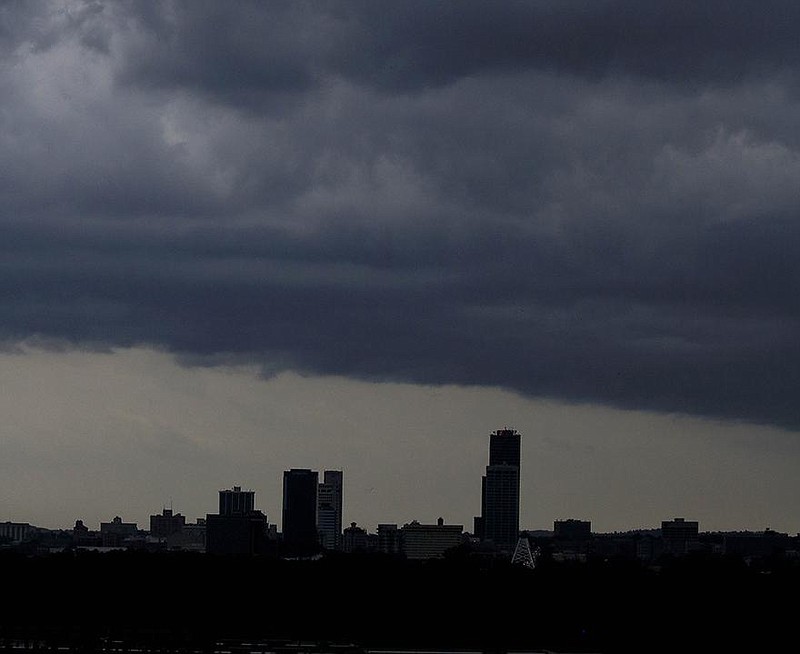 Flooding hit Tuesday morning in western Arkansas and a severe-storm system that included possible tornadoes blew through the central part of the state in the afternoon.

Storm reports included damage to houses, power failures and timber damage. Entergy Arkansas reported 1,296 customers were still without power at 8 p.m., with White County reporting the highest number at 1,296. Conway County had 176 without power, and Faulkner County had 93.

Brian Smith, a senior forecaster for the weather service, said that it appears the system spawned several tornadoes across the greater Central Arkansas area, but the agency won't be sure about the number or their path until a survey is completed. Crews will go out today to inspect the areas.

"The areas where we think most likely something happened are in Conway County, Faulkner County and Cleburne County," Smith said.

Jimmy Wiedower, chief deputy for the Office of Emergency Management in Faulkner County, said he wasn't ready Tuesday to say if a tornado tore through the county, but he said high winds knocked down several trees and power lines. He said damage could be seen in the Wooster area, as well as some areas north of Greenbrier and into Guy.

"We had some minor damages to homes in the Wooster area, and tin was blown off some of the barns in the Guy area," Wiedower said. "We had no injuries from what we have heard.

"I don't want to call it a tornado, because we haven't had any verification of it yet."

KC Pet Rescue in Plumerville posted on its Facebook page that the storm system hit its facility and caused extensive damage. People showed up at the facility to help round up animals after the storm, the post said.

Damage also occurred near Heber Springs in Cleburne County, where there were reports of two unconfirmed tornadoes, according to Amanda Cameron, the county's 911 coordinator and deputy emergency manager.

Downed timber in the Wildflower subdivision and Blakey Road areas damaged houses and blocked access into some neighborhoods, but no injuries were reported, Cameron said. Blocked roads forced crews to access some areas on foot to check on residents.

"It looks like little cluster areas, where it just popped down and there was a cluster of damage," Cameron said. "There was no straight line of damage."

Parts of northern and western Arkansas are being hit with unprecedented flooding as a rare weather event continues to soak the areas.

The National Weather Service issued a flash-flood watch Tuesday for northern and western Arkansas that will continue through today. Thunderstorms are expected through Thursday.

"We are very concerned about storms redeveloping and leading to heavy rain and flash-flooding," Smith said.

Portions of highways in Jackson, Montgomery and Scott counties were closed Tuesday because of flooding. The weather service also received reports of flooded roads in Yell, Scott and Polk counties.

Meteorologist Lance Pyle said the flooding is part of an unusual weather pattern that has settled over Arkansas and produced heavy rainfall almost daily over parts of western, northern and Central Arkansas.

"It storms at night and then continues into the morning hours, when it disperses and then re-forms again at night," Pyle said.

Seven to 12 inches of rain have fallen in the past week alone, the weather agency said. Soil moisture over western Arkansas into Central Arkansas is anywhere from 60% to 100%.

The frequent downpours have caused widespread flash-flooding in parts of Scott, Yell, Polk and Montgomery counties.

"I am getting all mixed up. It seems like it's [the movie] 'Groundhog Day,'" said Brandon Ellison, the county judge for Polk County. "The ground is completely saturated, and the creeks were already high, so the ground just can't handle it anymore."

Ellison said he has seen several federal disasters in his 10 years as county judge, but he said Tuesday that he has never witnessed flooding this bad in Polk County. He said many roads and bridges have been severely damaged and buildings are being flooded, including his office at the courthouse.

"We got an inch or two in the Office of Emergency Management, in my office, the district court, and the conference room," he said. "We are trying to operate in an office with water in it."

Ellison said he expects major damage to the county's infrastructure.

"There is going to be a lot of property loss," he said. "A lot of buildings have got water in them, and the public and private roads will be in horrible condition."

Sheri Thompson, chief deputy for the county judge's office in Scott County, said Waldron is dealing with flooded roads and buildings, too.

"We have had a lot of [water] rescues today," she said. "Don't go off into the water if you are not sure about it. We have people going off into this water and they are getting in trouble, and it's putting people's lives in jeopardy."

"There is just widespread flooding, from the southern county line all the way up to the Dardanelle area," he said. "These are the normal areas that go under water, but this time it's all over the county."

Gilkey said the county had 10 to more than 20 inches of rain in some areas during August, and the ground can't hold any more water.

"In some places we are seeing 1 to 3 inches of water an hour," he said. "It's quite unusual to see this."