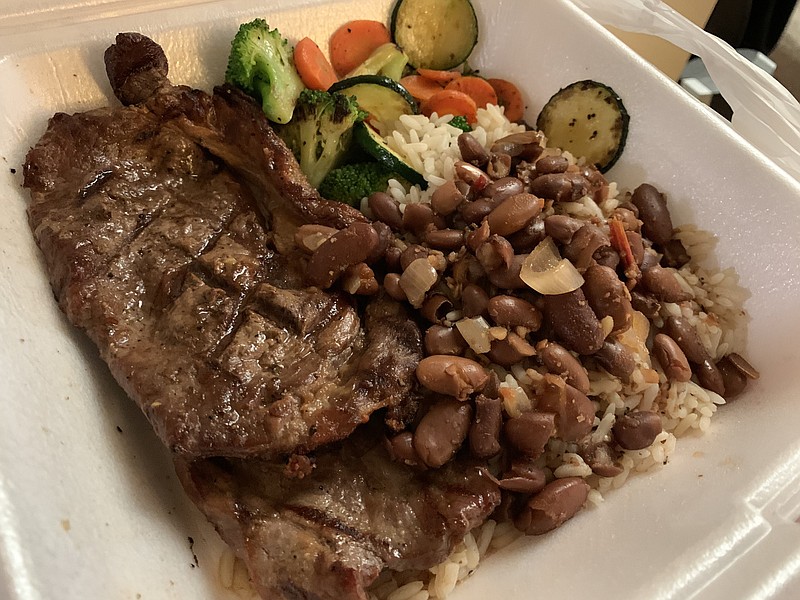 You can still eat, drink and be merry. But wise folks in these pandemic-pressed days are doing it at home.

Our weekly peripatetic prandial process took us from downtown to Little Rock's Pulaski Heights and to North Little Rock's Amboy neighborhood. As is our practice, we stayed within a radius whereby our food would still be hot, or at least warm, by the time we got it home. By our inflexible law and custom, we paid for all meals up front.

WHAT WE GOT: Carne Asada ($10.99). This neat little family owned and operated cafe is within walking distance of our office — but, of course, we've been out of our office for many months. We dropped in late in the afternoon and ordered up their 8-ounce grilled ribeye, done a little better than we would prefer (nobody asked how we wanted it prepared) but still reasonably tender and, considering it's a ribeye, some but not too much of it was inedible fat or unchewable gristle. It came with brown beans over rice, a decent portion of mixed veggies (broccoli, carrots and zucchini), three corn tortillas and a cup of pico de gallo, presumably to season the steak. (We didn't need it.)

HOW IT WENT: The dining room is open, so we placed a walk-in order, which took about 10 minutes.

HOW IT'S GOING: Apparently the place has been doing well enough for breakfast and lunch, but the family (mom, pop and kids, from youngsters at a table to teens who help out taking orders and running the register) recently appealed via its Facebook page: "Hi guys we need you please to be our support in our Dinner time please, please thank you!" Ours was certainly the only order early in their dinner process. They stay open until 6. 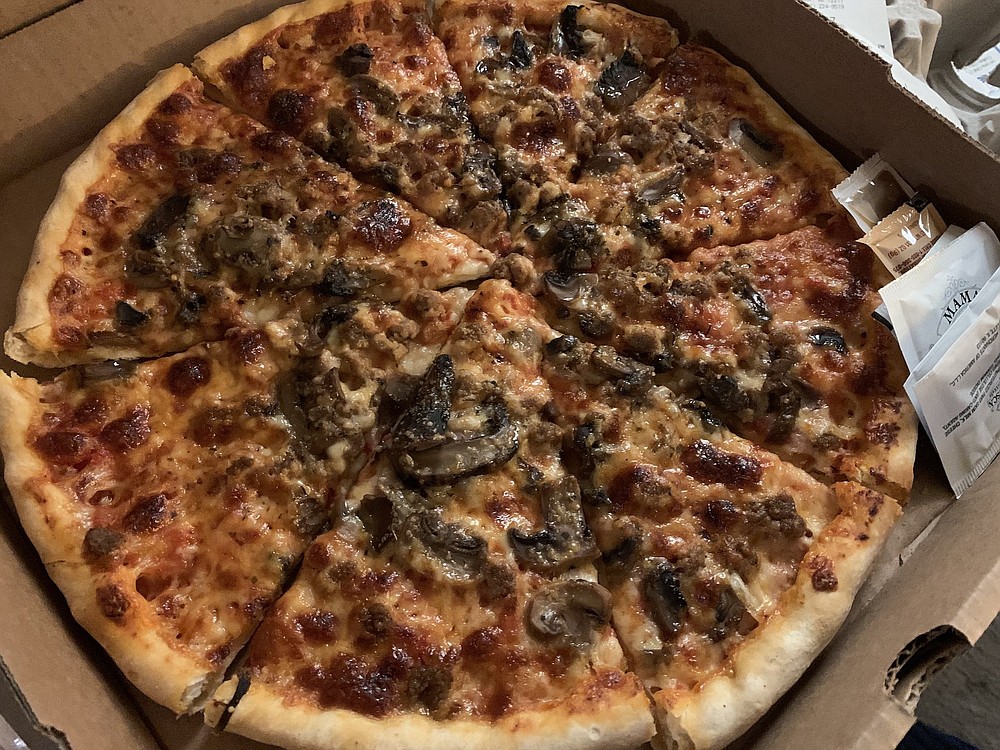 Pizza Cafe's pies come on a cracker-thin crust. It supported adequate portions of cheese, sauce and in this case, sausage and mushrooms. (Arkansas Democrat-Gazette/Eric E. Harrison)

WHAT WE GOT: Medium (13-inch) sausage and mushroom pizza ($13.25 single ingredient, plus $1.65). For some reason, possibly because it takes the kitchen about 20-25 minutes to produce a pie, we have bypassed Pizza Cafe when ordering pizza, but every time we passed it en route to some other Riverdale location over these past few months we have vowed to visit. And now that we must call ahead rather than walk in, it's more practical, as the wait comes at home rather than at the bar. We made our usual to-go pizza order, sausage and mushrooms, opting for a medium because a large is 15 inches and we thought that would be too big. The thin, cracker-like crust quite adequately supported a generous portion of tasty cheese, sauce and toppings, though it didn't hold onto the heat as long as a thicker crust might have.

HOW IT WENT: We arrived about two minutes ahead of the 25-minute pledge time and consequently it took our order a couple of minutes after we arrived. We paid on the premises.

HOW IT'S GOING: There was a small stream of orders awaiting pickup and moving out the door for curbside hand-off. Finding a parking place without violating the space of the next-door business may be an issue. Pizza Cafe also has a "West" branch on Cantrell Road just east of Taylor Loop. 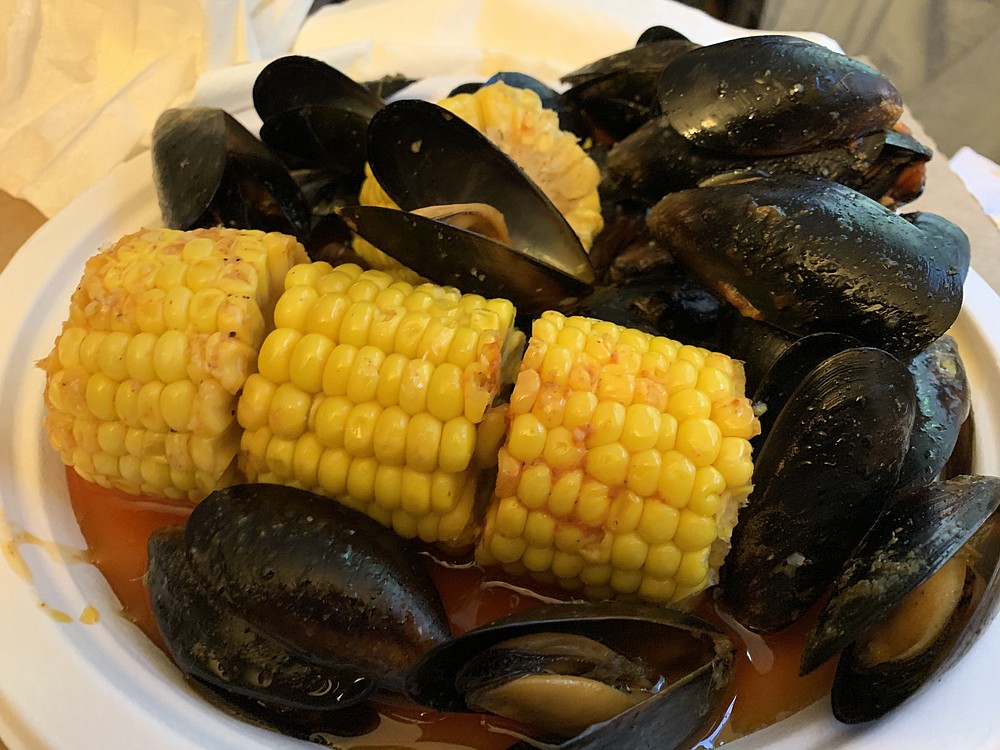 Our pound of mussels in garlic butter with corn on the cob from Lulu’s Seafood Kitchen was sloppy but glorious. (Arkansas Democrat-Gazette/Eric E. Harrison)

WHAT WE GOT: One pound of Pacific mussels in garlic butter ($14.99), ½ corn on the cob ($3.50). We've been a little leery about a to-go order from Lulu's, recently renamed from "Lulu's Crab Boil" but still a tribute to the late Lulu Chi, whose family runs a number of predominantly Asian restaurants around the area. The reason: most of what Lulu's does best, seafood boils in a variety of sauces, is pretty messy if you're eating it in-house. What, we wondered, would what went out the door be like when we got it home? Well, our pound of Pacific mussels and side corn, done in a non-spicy garlic butter (other options include lemon pepper, "Rajin Cajun" and "Lulu Sauce," anywhere from no spice-"crybaby" through "Hot to Trot" to "Inferno"), came in a plastic sack with no other support. In the restaurant, the plastic sack comes on a plastic platter, but we had to scurry to find a plate to dump our dinner, plus a roll of paper towels (and you know how rare those are these days) and something into which to deposit the shells. But the result, while sloppy as all get-out — mussels, of course, are a finger food after a fashion, not to mention the corn — was glorious. We found only two that had to be finger-pried open, pretty good for a couple dozen.

HOW IT WENT: We tried to order and pay online but the system balked on us, so we placed and paid for our order on a walk-in basis. (The dining room is open.) As it happened, we were also paying unwitting tribute to Lulu Chi on the second anniversary of her passing.

HOW IT'S GOING: There were four tables of dine-in customers that evening. We're told the place still does a pretty roaring good to-go business, though we didn't witness any other to-go orders. A second location opens soon in the former La Madeleine location on West Markham Street near its confluence with Chenal Parkway. 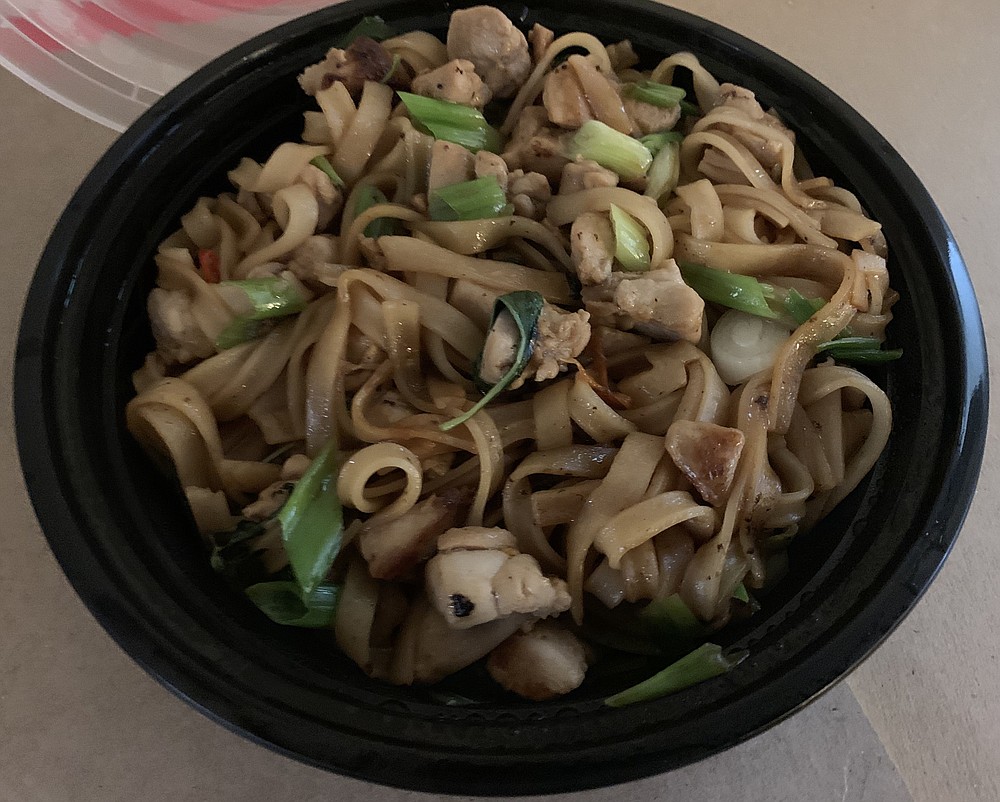 WHAT WE GOT: Basil chicken stir-fry with noodles ($8), three spring rolls ($5), Thai tea ($2). The motto painted on the side of the food truck: "Thai food with a pinch of Southern Soul." We weren't looking for it — didn't even know it existed, Thai food fans that we are, until we dropped by the food truck court at Eighth and Chester streets on a whim the other day and found it, crammed, cheek by motorized jowl, with among seven or eight trucks onto the lot of a former Gulf station. But we're glad we found it. Our stir-fried basil chicken, just spicy enough at level "2" (out of five) to be lively without being fiery, was delicious; we're glad, too, we got it with noodles rather than rice. We indulged in three crispy-shelled spring rolls with a sweet-and-sour-and-red-pepper dipping sauce. And $2 for the sweetened Thai tea was a bargain. Other options for another day: their Facebook page shows a pretty attractive beef ramen stir-fry, and they also do a range of fried rice with chicken, shrimp, combo and/or vegetable.

HOW IT WENT: We walked up, ordered and paid. It took about 10 minutes for the tiny kitchen to produce our order.

HOW IT'S GOING: There was one other customer ahead of us. Other food trucks on the premises were also doing minimal-to-decent business late in the lunch hour. 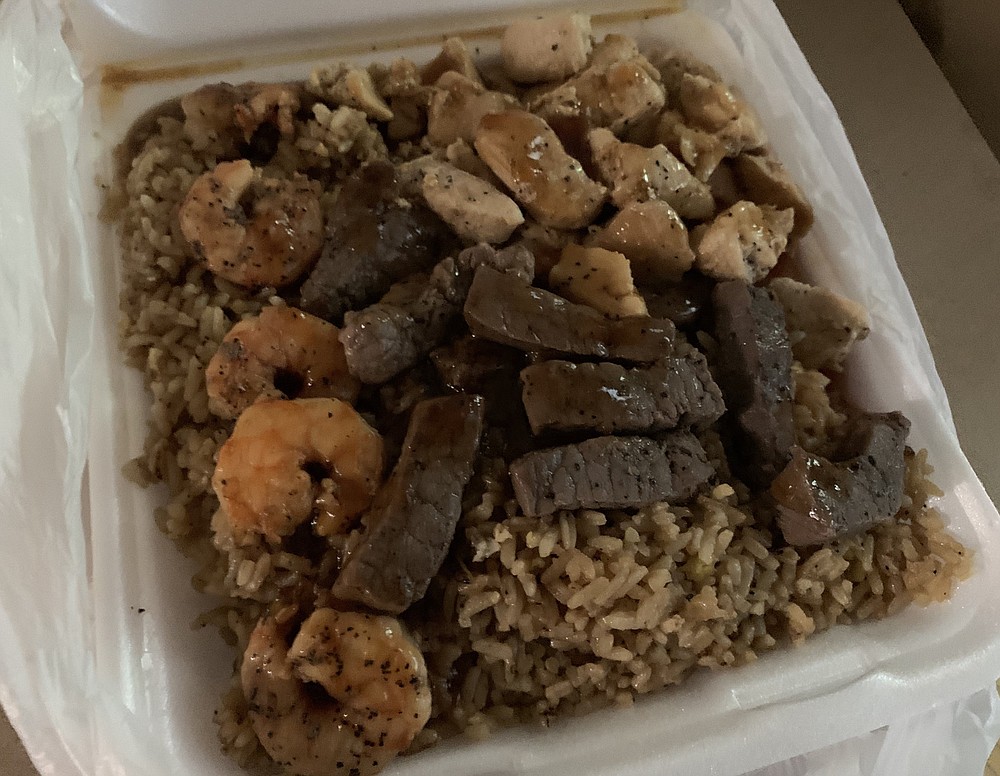 WHAT WE GOT: Hibachi Trio ($13.67), hibachi-grilled chicken, beef and shrimp over fried rice; fried gyoza dumplings ($3.42). That this is an Asian-fusion operation is not immediately obvious, even from the signs that hang under the eaves of the former diner it occupies. The portion size on our entree was generous, even enormous. The winner was the four shrimp, plump, firm and well-seasoned without going overboard. The beef and chicken were more plentiful but also a little dry; there was enough garlic in the chicken to fend off vampires and we couldn't finish it. The gyoza were crisp and practically a give-away at that price, but we missed the usual garlic-soy dipping sauce that most places provide — we only got a couple of plastic packets of duck sauce, not a very good alternative.

HOW IT WENT: We placed our order by phone and it was ready when we arrived; we paid for it on pickup.

HOW IT'S GOING: TLC, as they abbreviate, is the latest of more than a dozen restaurants to take over the former diner at MacArthur Drive and Military Road. Lifespan on many of its predecessors has been in terms of mere months. Whether this latest will succeed, we cannot predict. It certainly wasn't busy in the middle of a recent lunch period; to be fair, we should note that our visit was a couple of weeks ago and business may have picked up. The two dining areas are almost totally blocked off, with one table available, possibly so folks can camp out while waiting for their orders to come out of the postage-stamp-sized kitchen.