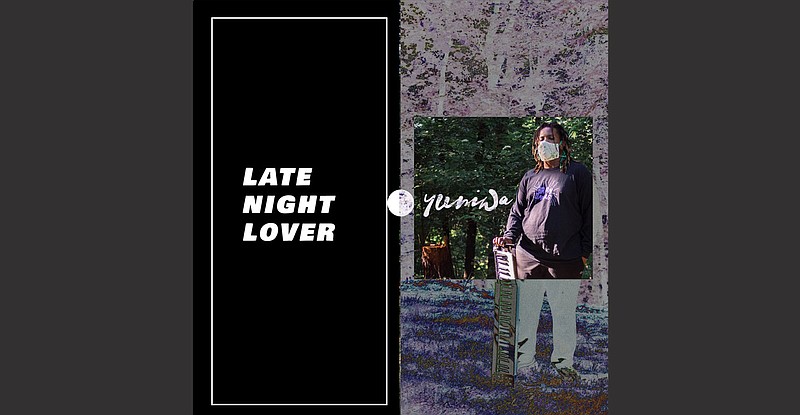 Yuni, born Princeton Coleman 23 years ago, has been composing electronic instrumentals at a ridiculously prolific pace since he was a teenager — soundscapes that range from club bangers to blissed-out, chillwave pieces spanning hip-hop, jazz, disco, trap, rock and pop.

He has released 48 albums, including this year's "Allegory." "Can't Tell," a track from his 2015 project "Ethereal Lover," has more than 1.8 million plays on Spotify and his new single, "Late Night Lover," was released Friday on his Divinity Sounds label.

"A lot of what he does sonically sounds and feels like a lot of the Afrofuturist stuff I'm into visually," says musician and photographer Joshua Asante. "He draws on a lot of classic electronic stuff, but he brings a contemporary vibe to it. He does his own thing, and when I hear something he has made I know his footprint is on it."

Wearing a blue Undefeated shirt, granny glasses and his hair in short dreads, Yuni speaks from behind a mask about his music at a table outside the coffee shop.

"I grew up in the Baptist church, so I was in choir at a very young age," he says.

By middle school, he was learning how to make music with software like Pro Tools through a program at the Billy Mitchell Boys and Girls Club. It's also where he began playing guitar, bass and drums.

"That's where music really started to come into my life," he says. "They had this whole place in there where they would give kids the chance to really come in there and learn music, how to play and how to record."

In high school, he started recording as Pharoah Ra, a nod to avant jazz greats Pharoah Sanders of Little Rock and Sun Ra, a jazz composer who died in 1993.

"I love both of those guys," he says. "A lot of my inspiration comes from experimental jazz."

He is also a devotee of the late J Dilla and Flying Lotus, the producer, DJ and musician.

He was also watching Adult Swim, the block of fantastically weird and inventive animated shows on the Cartoon Network that featured Flying Lotus' instrumental interludes used as "bumpers."

"Right around the time Dilla died, in '06, that's when I discovered Flying Lotus," he says. "I feel like I'm part of that family tree, a continuation of those sounds."

His first recordings were rudimentary efforts made on a computer using iPod earbuds. When he was 16, he started working through a Little Rock youth summer job program and saved money to upgrade his gear.

He eventually morphed from Pharaoh Ra into Yuni Wa, a take on the Japanese term "yuni-ba-saru," which means universal.

Explaining how he composes a track, Yuni says: "I have so many different processes. Sometimes, I'll start without a keyboard and go with a melody. I can make a drumbeat first and go from there and layer everything. Or I can do the synth first and lay the drums over everything."

With the nocturnal "Late Night Lover," he is "taking a very different approach than ever before as an artist," he says. "I'm in a different place. I'm trying to still be a contemporary electronic artist, still go for that cinematic feel and hold true to the experimental aspect of everything."

The track is the first from "Yuniversity II," the album which he plans to release in November and a sequel to 2015's "Yuniversity," which contains the infinitely catchy "So 1989."

"In his music, what draws people in and what ultimately is his greatest asset is his sensitivity," Asante says. "And his willingness to be vulnerable and to try new things."

Yuni has performed locally with his friend Goon des Garcons, the Little Rock rapper who records for Def Jam, and has played shows in Florida, Missouri and Wisconsin.

He was gearing up to tour this year but, well, this year became this year and touring is out for a while.

He's not deterred, however.

"I want to take it worldwide," he says of his music. "I come from a civil rights background, one that is politically aware ... and I'm trying to be one of the next important artists to come from Arkansas."