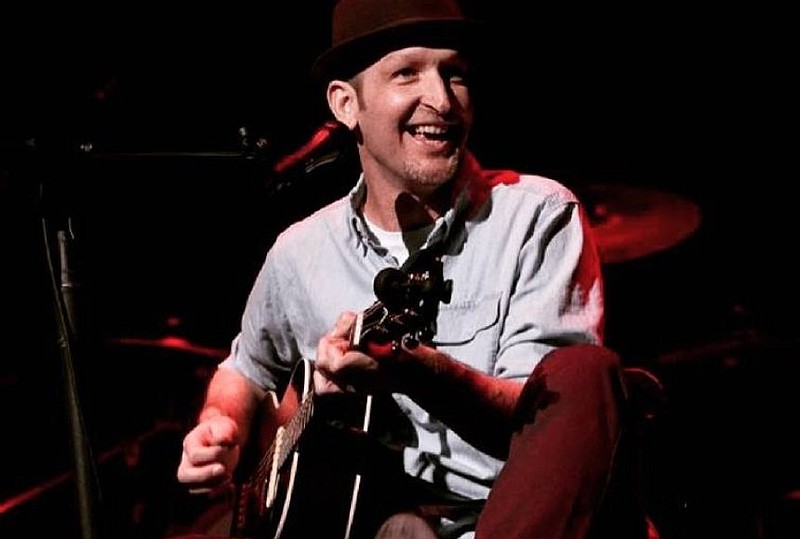 Southern solo singer Trey Johnson will entertain patrons at The Oyster Bar beginning at 6 p.m. today. (Special to the Democrat-Gazette)

Live music is trickling back to Arkansas. Below we've rounded up who's playing where and when, along with some online ideas and other alternatives.

Singer-songwriter Trey Johnson will perform at 6 p.m. today at the recently reopened Oyster Bar, 3003 W. Markham St. in Little Rock. Joey Barrett will perform at 6:15 p.m. Saturday at the club. Seating and admission will be limited, because the restaurant has not fully reopened. For now, owner Chris Tanner is offering a prix-fixe dinner and reservations cover the whole evening. To book a table, call (501) 666-7100.

◼️ An "Acoustic Throwdown" will be held at 5 p.m. today at The Library Kitchen + Lounge, 313 President Clinton Ave., Little Rock.

◼️ Percussionists of all levels and skills are invited to a Drum Circle on Saturdays, continuing through Oct. 11, at Bernice Gardens, 1401 Main St., in Little Rock. Searcy Ewell will facilitate. Donations are encouraged, masks are required and physical distancing will be practiced. Drums, chairs and hand sanitizer will be supplied. No musical experience is needed.

LIVE IN THE SPA CITY

◼️ Josh and the Fall Out will perform at 9 p.m. Friday and Saturday at The Big Chill in Hot Springs.

Patti Smith will present "An Evening of Words & Music" at 8 p.m. Friday from the Murmrr Theatre in Brooklyn, N.Y.

Tickets are $30, on sale at murmrr.com, includes a paperback copy of her latest memoir, "Year of the Monkey," which takes Smith from Santa Cruz, Calif., to the Arizona desert and then to a farm in Kentucky. Smith's album, "Horses", is considered one of the top 100 albums of all time.

◼️ Brad Paisley and Carrie Underwood will perform live at 8 p.m. Saturday at the Grand Ole Opry on the Circle network, available on YouTube, Twitter and Facebook channels or on the DISH network.

Though live music remains on the endangered species list in most locations, we still have radio and the fine folks who still take seriously their semi-sacred duties to entertain us with that medium, so it makes sense to give some of our favorites a sincere shoutout.

◼️ Amy Garland Angel, whose show "Back Roads," is heard from 5 to 7 p.m. Fridays on community radio station KABF-FM, 88.3, was playing some tasteful tunes last week. As one would have expected, she noted the death of Justin Townes Earle by playing a couple of his songs, one original, and one amazing cover version, The Replacements' "Can't Hardly Wait," which — dare I say it? — might be even better than the original, thanks to the song's arrangement, which relied on mandolin and fiddle.

And there was another standout selection: "800 Miles Around," by Mark Bilyeau, on his album, "First One Free." He was once a member of Springfield, Mo., Americana band, Big Smith, and now part of The Creek Rocks, a duo with Batesville native Cindy Woolf. Bilyeau's guitar skills on the song recall the sounds of Richard Thompson.

◼️ Pat "Flap" Jones' "Not Necessarily Nashville," comes along from 6 to 8 p.m. Saturdays on the NPR station, KUAR-FM, 89.1. She played a song by one of the least heralded greats from Lubbock, Texas, Terry Allen, and also songs by the Buffalo Gals, Waylon Jennings and Dirk Powell.

◼️ Len Holton comes on after Flap's show with his "From Albion and Beyond" show from 8 to 9 p.m. Saturday. Holton's latest show featured music by The Waterboys (Mike Scott's) band and selections by Passenger (Mike Rosenberg), Emily Barker, Dirk Powell and Rura, whose two songs, "Mary" and "Weary Days," were remarkably stunning.

(Both Jones and Holton played selections by Barker and Powell.)

◼️ We've been big fans of singer-songwriter Todd Snider's covid-era weekly musings, which can be accessed at any time at purplebuildinglive.com. His performances include his own songs and those of others, sometimes in tributes to the fallen, as he famously did when John Prine succumbed to the virus. Just last week, he noted the sudden death of Justin Townes Earle, and surprised me by dedicating his latest show to Snider pal, author of "That Thin, Wild Mercury Sound: Dylan, Nashville, and The Making of Blonde on Blonde," one of the best books about a musician that I have ever read. Dylan fans take note ...

◼️ "Harmonics," a new podcast that will be hosted by actress, comedian and activist Beth Behrs ("The Neighborhood" and "2 Broke Girls") will be released each week, starting Tuesday. Future episodes will feature singer-songwriters Mary Gauthier and Brandi Carlile. Check it out wherever you get your podcasts.

"Harmonics" is described as "a new podcast exploring the unexpected ways that music and creativity can lead to wellness and healing."

To list a live or virtual music show, email jackwaynehill@gmail.com or jmcleod@adgnewsroom.com. Include the place, times and ticket prices along with a phone number or email address where we can reach you.