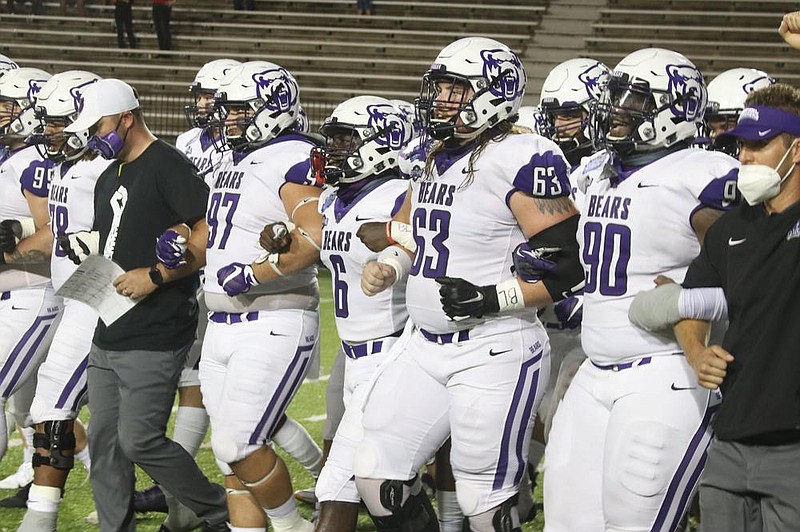 Central Arkansas Coach Nathan Brown (left) walks onto the field with his players before the Bears’ victory over Austin Peay on Saturday night. The school said Wednesday there have been no positive covid-19 tests on the team after two rounds of testing after the game. (Photo courtesy of University of Central Arkansas)

Brad Teague and Nathan Brown could not have been happier Wednesday afternoon.

The University of Central Arkansas athletic director and head football coach were elated Wednesday at 5 p.m. when they found out the football team had zero positive covid-19 tests for the second time this week, just four days after playing the first football game of the season. The Bears are set to play the University of Alabama-Birmingham today in the first FBS game of the year.

"I think a lot of eyes were wondering how we fared this week," Teague said. "And really the Sunday test didn't mean as much as today's test did with the incubation periods and if we actually infected each other as teams on Saturday night. It probably wouldn't have shown up Sunday morning anyways.

"So we were concerned about today's test, and man, it just confirms that this can be done. If you do it right and your students are motivated to stay away and stay safe and healthy, then it can be done."

In the week leading up to Saturday's game against Austin Peay, UCA had two positive tests -- two players who were not on the travel squad -- out of 166 football personnel.

After the game, UCA was tested by UAB's medical team Sunday at 8 a.m. and got results back Monday evening, with all of them negative. The Bears were tested again Wednesday morning, this time by a third party not associated with either school and the test being a rapid antigen test that provided same-day results.

UCA, which has stayed in Birmingham all week, is now cleared to play UAB after passing Conference USA's testing protocols.

"First of all, I'm very proud of our student-athletes. It's a testament to everything they've done off the field, staying socially distanced, wearing their masks," Brown said of the 72 players who traveled to Alabama. "But maybe more importantly, this shows that playing a game doesn't result in positive tests. When I say that, we were all negative Sunday, but science says it should take a couple days to contract the virus. This is obviously four or five days outside of the contest, and we're all negative.

UCA next will test its travel squad Monday morning, then have two weeks off before playing at Arkansas State University on Sept. 19. As of right now, according to Teague, UCA has had one positive case out of 409 athletes tested across all sports this week. The week of Aug. 24, the Bears had eight cases.

Teague hopes that not only the football team but all of UCA's athletes continue to follow the guidelines the school and athletic department have put in place.

"I knew we had committed coaches. I knew we had just the most professional athletic training staff and medical professionals. They have really worked hard to train our student-athletes," Teague said. "And then ultimately, you have to give our student-athletes credit. They've stayed safe and healthy and away from others, and we've been smart about how we run our protocols. We hope that stays the same."

WHERE Legion Field, Birmingham, Ala.