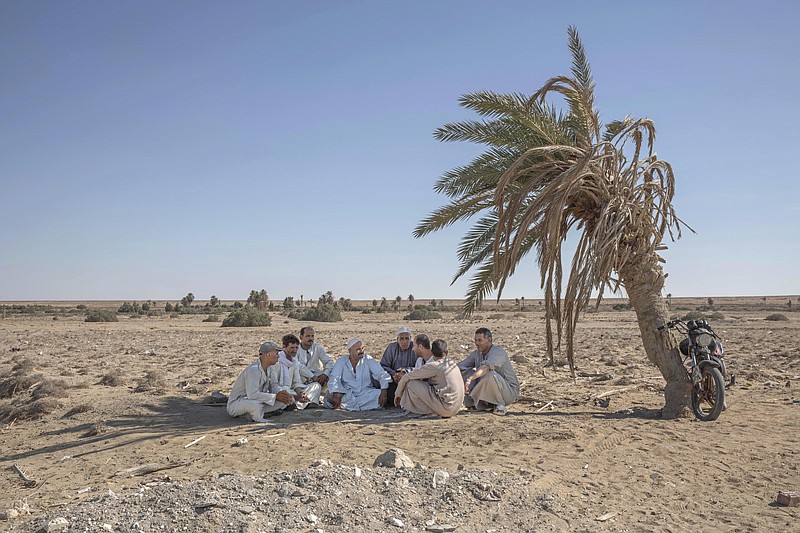 FILE - In this Wednesday, Aug. 5, 2020 file photo, Egyptian farmer Makhluf Abu Kassem, 55, center, sits with farmers under the shade of a dried up palm tree surrounded by barren wasteland that was once fertile and green, in Second Village, Qouta town, Fayoum, Egypt. The State Department said Wednesday, Sept. 2, 2020 that on the guidance of President Donald Trump the U.S. is suspending some aid to Ethiopia over the "lack of progress" in talks with Egypt and Sudan over a massive, disputed dam project which Egypt has called an existential threat and worries will reduce the country's share of Nile waters. (AP Photo/Nariman El-Mofty, File)

JOHANNESBURG -- On the guidance of President Donald Trump, the State Department said Wednesday that the U.S. is suspending some aid to Ethiopia over the "lack of progress" in the country's talks with Egypt and Sudan over a large, disputed dam project it is completing on the Nile River.

The dam dispute centers on two of Africa's most populous and powerful nations, Ethiopia and Egypt, and some have feared it could lead to military conflict.

A State Department spokesperson told The Associated Press that the decision to "temporarily pause" some aid to a key regional security ally "reflects our concern about Ethiopia's unilateral decision to begin to fill the dam before an agreement and all necessary dam safety measures were in place."

It is not clear how many millions of dollars in aid are being affected, or for how long..

Ethiopia this week said it was asking the U.S. for clarification after a media report said Secretary of State Mike Pompeo had approved cutting up to $130 million in aid.

The report by Foreign Policy last week set off an uproar among some in Ethiopia, which sees the dam as a source of national pride.

Africa's largest hydroelectric dam has caused severe tensions with Egypt, which has called it an existential threat and worries that it will reduce the country's share of Nile waters. Ethiopia says the $4.6 billion dam will be an engine of development that will pull millions of people out of poverty.

Sudan, in the middle, worries about the effects on its own dams though it stands to benefit from access to cheap electricity.

Years of talks among the countries have failed to come to an agreement. Key remaining issues include how to handle releases of water from the dam during multiyear droughts and how to resolve future disputes.

The U.S. earlier this year tried to mediate the discussions, but Ethiopia walked away amid accusations that Washington was siding with Egypt. Now the three countries are reporting any progress to the African Union, which is leading negotiations.

Ethiopia had said it would fill the dam with or without a deal with Egypt and Sudan. The dam's 74 billion-cubic-meter reservoir saw its first filling in July, which Ethiopia's government celebrated and attributed to heavy rains, while a startled Egypt and Sudan sought clarification and expressed skepticism.

"The United States previously and repeatedly expressed its concern that commencing the filling of the GERD before all necessary dam safety measures were implemented created serious risks for the populations of the downstream countries," the State Department spokesperson said. "In addition, filling while negotiations were underway undermines the other parties' confidence in the negotiations."

A former U.S. ambassador to Ethiopia, David Shinn, had warned against the cut, writing that "playing political hardball with Ethiopia will not only fail to obtain Washington's desired result but will probably ensure that the Ethiopian diaspora in the United States rallies against Trump. There are sizeable Ethiopian-American communities in key states such as Georgia, Texas, and Virginia." 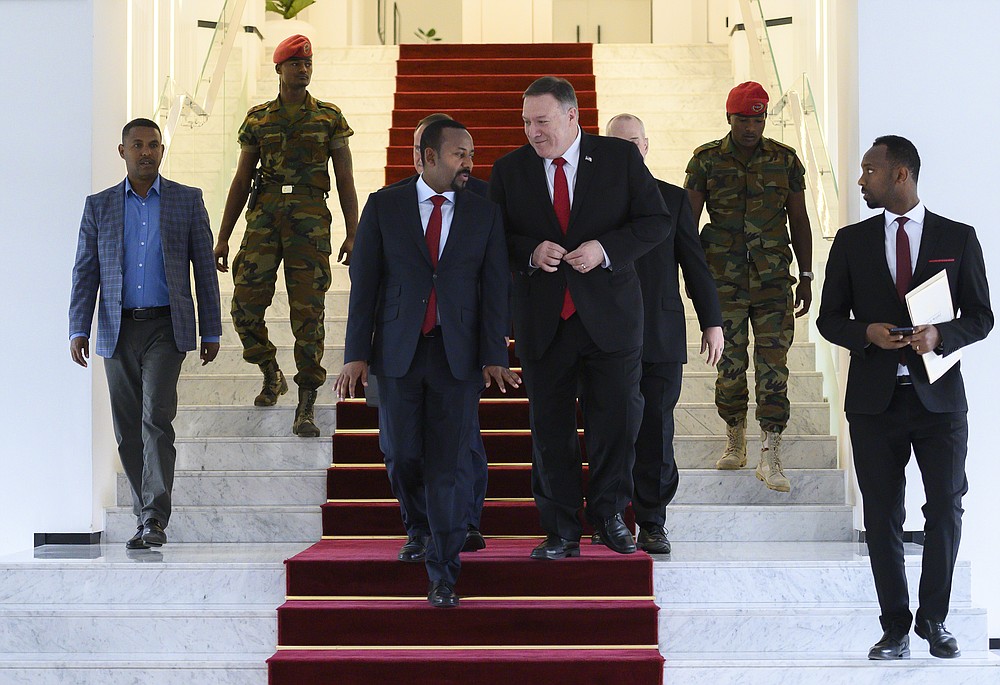 FILE - In this Tuesday, Feb. 18, 2020 file photo, U.S. Secretary of State Mike Pompeo, center right, walks with Ethiopia's Prime Minister Abiy Ahmed, center-left, after meeting at the Prime Minister's office in Addis Ababa. The State Department said Wednesday, Sept. 2, 2020 that on the guidance of President Donald Trump the U.S. is suspending some aid to Ethiopia over the "lack of progress" in talks with Egypt and Sudan over a massive, disputed dam project which Egypt has called an existential threat and worries will reduce the country's share of Nile waters. (Andrew Caballero-Reynolds/Pool via AP, File)
ADVERTISEMENT