OPINION | TELEVISION: 'Women Make Film' is too much and not enough 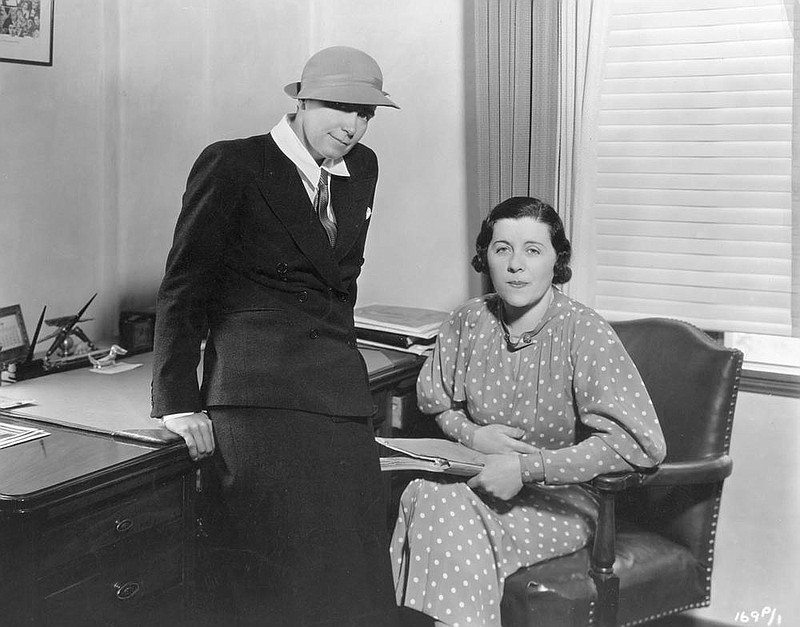 Dorothy Arzner (1897-1979, left) and Sonya Levien (1888-1960), the film director and screenwriter, respectively, were collaborating on the Fox film “The Captive Bride” in this 1930 photo. A former editor, Arzner gained fame as the only female director in Hollywood in the 1930s. (Hulton Archive/Getty Images/TNS)

One thing I have learned in my many decades of watching movies is that when Tilda Swinton talks, I listen. So if you are wondering what awaits you in "Women Make Film: A New Road Movie Through Cinema," a new documentary series debuting Tuesday on the Turner Classic Movies channel, just listen to the first few minutes of Swinton's narration of the debut episode. In short order, you will find out everything you need to know about this 14-episode epic.

Including the likelihood that you will make it past the first hour.

Written and directed by Irish film critic and filmmaker Mark Cousins, "Women Make Film" is not about female filmmakers. Or at least not in any of the ways you would expect. Before Swinton gets to what "Women Make Film" is about, she tells us what we should not expect from the series. It is not about the directors' lives, she says. There will be no analysis of how female directors are different from male directors. And it's not, Swinton says with a little wink in her voice, "one of those lists of the best films ever made."

So what is it, then?

"This is a film school of sorts, in which all the teachers are women. An Academy of Venus," Swinton says, finally.

Consider yourself warned. Or intrigued. I recommend both.

Like Cousins' 2011 series "The Story of Film: An Odyssey" (which TCM aired in 2013), "Women Make Film" is a massive survey class illustrated by a staggering number of film clips from a global collection of filmmakers. But while "The Story of Film" took the expected timeline approach to the subject -- the birth of cinema, the arrival of sound, European New Wave, America's seminal '70s, etc. -- "Women Make Film" is dedicated to the art and craft of making movies. Very, very dedicated.

Each of the 14 episodes is divided into multiple chapters that focus on specific cinematic building blocks. The debut episode's first chapter looks at the different ways directors open their films, while the second chapter deals with tone.

If you're looking at this topic lineup and thinking it sounds an awful lot like a syllabus, you would be right. And if you watch the first episode and feel like you are sitting through the world's most lavishly illustrated lecture, you would be right about that, too. As Professor Swinton said, "Women Make Film" is a film school of sorts, and while there will be no pop quizzes or term papers at the end of our TV semester, your patience will certainly be tested.

There are no interviews in "Women Make Films," which means there are no experts on board to explain why Ukrainian director Kira Muratova is, to quote Swinton, "one of cinema's most distinctive filmmakers." Or why Alison de Vere's "The Black Dog" is considered "one of the most surreal ever made."

What you get in this series is a celebrity narrator -- Swinton, Jane Fonda, Thandie Newton, Adjoa Andoh, to name a few -- laying out the episodes' themes, introducing the clips that illustrate them, recapping the themes, and sometimes giving you a play-by-play of what you are seeing on the screen. While I appreciate Cousins' desire to look at female filmmakers through the breadth and depth of their work, the lack of any outside perspective -- historical, critical or biographical -- makes it hard to get a handle on what you're looking at and why it matters.

Between the purple prose and the lack of context, Cousins' narration often sounds like a take-home exam written at the very last minute by a very smart student hoping the abundance of poetry will make up for the lack of everything else.

But the clips! Oh my gosh, the clips. Cousins stuffs each episode to bursting with snippets of films you will want to see more of by directors you'll want to know better.

The series introduces us to more films and filmmakers than we can begin to absorb (40-plus films are featured in episode two alone), but to his credit, Cousins and his wide-ranging passion will make you want to dig deeper. And to its credit, Turner Classic Movies is here to help.

Throughout the run of "Women Make Film," TCM will be showing movies by many of the filmmakers featured in the series. Every Tuesday night through Dec. 1 will be devoted to films highlighted in that evening's episode.

There are more treats on the series website (womenmakefilm.tcm.com), including film clips, trailers, filmmaker biographies, and the full film schedule. Yes, "Women Make Film" is going to stress your brain and your eyeballs, but you are going to love the homework.