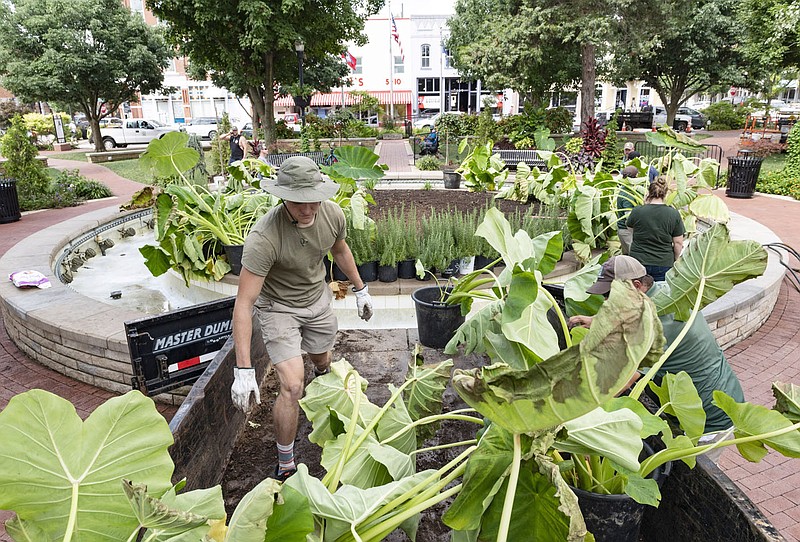 Tyler Hallam (left) works with other Bentonville Parks and Recreation Department works to off load elephant ear plants (Colocasia) as they work to plant a garden inside the Bentonville√¢‚Ç¨≈°√É‚Äû√É¬¥s squares fountain where the confederate statue once stood. (NWA Democrat-Gazette/Spencer Tirey)

BENTONVILLE -- Parks and Recreation staff on Thursday filled in a hole and started to landscape where the Confederate statue stood on the downtown square, a city official said.

The Arkansas division of the United Daughters of the Confederacy, the group that owns the monument, announced June 1 it would move the statue to a nearby private park.

Workers from Nabholz Construction used a crane to remove the statue Wednesday morning, then spent the rest of the day removing the base. They completed the job a little before 4 p.m.

Part of the base was buried in the ground and it left a hole about 2 feet deep and 6 feet wide, said David Wright, Parks and Recreation director.

The monument, which consists of a pedestal and a statue of a bearded Confederate soldier, had been on the downtown square since 1908. It was on property owned by the county and the city maintains the property, including beautification.

The statue was on the city square long before a circular, brick fountain was built around it, Wright said. The monument sat in the center of the fountain.

The city usually spends about $25,000 a year on material costs for square upkeep, he said. That includes sod replacement and landscaping. The cost this year might not be as high because events like First Friday that draw large crowds have been canceled in light of covid-19, Wright said. The square is about an acre, he said.

Wright hopes to have the work done by the farmers market Saturday morning.

Benton County Judge Barry Moehring sent an email Wednesday to justices of the peace and other elected county officials detailing the move. He noted the square is Benton County property from curb to curb. It was the location of the second county courthouse, which was burned during the Civil War, according to Moehring.

"We have a long-standing agreement and partnership with the city of Bentonville to treat the square just like a Bentonville city park, and they do a fabulous job beautifying and maintaining the fountain, walkways, landscaping and other amenities in the square," he wrote.

The monument, which has been listed on the National Register of Historic Places since 1996, will be refurbished and kept secure before it is moved to James H. Berry Park, said Joey McCutchen, who represents the Daughters of the Confederacy. Berry was an Arkansas governor and U.S. senator at the turn of the 19th century.

The private park will be adjacent to the Bentonville Cemetery, where Berry is buried. The cemetery is at 400 S.W. F St., just southwest of downtown.