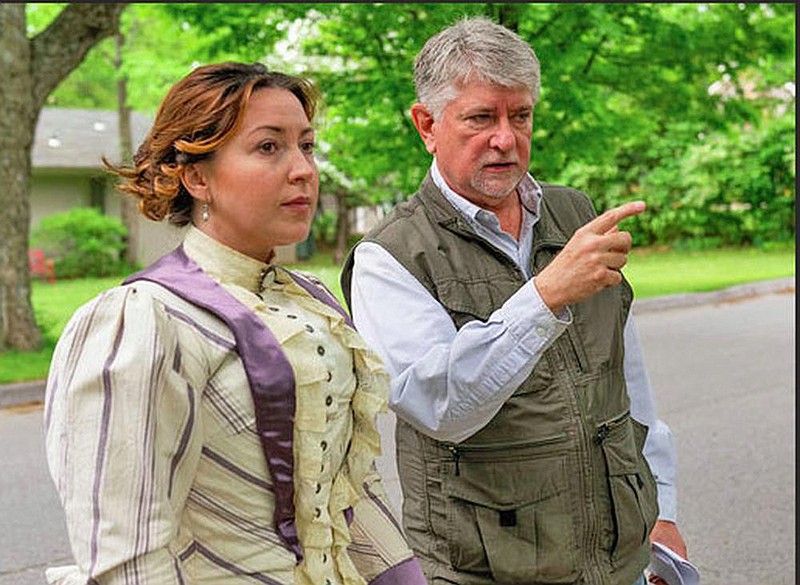 Even though he was born in Ohio and honed his legal skills in Missouri, Judge Isaac C. Parker has become as much a part of Arkansas lore as the Ozark National Forest and the Arkansas River.

From 1875 to 1896, he presided over the federal courthouse in Fort Smith. During that period, he was the law along the western edge of Arkansas and what is now Oklahoma, then known as Indian Territory. Because of the large number of defendants he sent to the gallows, he became known as the "Hangin' Judge," and his jurisdiction was dubbed, "The Court of the Damned."

There's a large statue of him in Fort Smith, and a legend that's even bigger. The area where 79 of his defendants met their end is now a tourist attraction, and he's even a character in Arkansas novelist Charles Portis' "True Grit" -- and both movies adapted from it.

Despite Parker's gargantuan reputation, Larry D. Foley of the School of Journalism and Strategic Media at the University of Arkansas says Parker was probably more interesting in real life than he was as a legend.

His new documentary "Indians, Outlaws, Marshals and the Hangin' Judge" demonstrates that the jurist who terrified outlaws on both sides of the state line led a life and a court more complex than his nickname implied. Because covid-19 has made a conventional premiere impossible, viewers can catch the documentary on the film's Facebook page starting at 7 p.m. Thursday. The film will get a distribution deal on streaming, broadcast and DVD later.

"I had two (Parker) scholars (Daniel Mahar and Tom Wing) talking with each other because the three of us had had lunch at one time. Both of them come from a different point of view," Foley says. "One of several points that we wanted to show was that Parker wasn't any one thing. He was complicated, and from my own research I would tell you he was sometimes contradictory of himself."

For example, a disproportionate number of the people he sentenced to death were either Black or American Indian, but one of Parker's trusted deputy marshals was Bass Reeves, a Black man who could speak American Indian languages and who had the authority to arrest white suspects. There is also a statue of him in Fort Smith.

"The reason (Reeves) was sent out there was to clean out the Indian Territory from the white bad guys," Foley says.

While Parker's manner may have been courtly to the public, he may have even encouraged his merciless notoriety for punishing criminals.

"He was a darling of the press," Foley says. "There was a quote that I didn't use in the film about how much he appreciated the 'hardworking press.' I think he enjoyed being interviewed. He was very prolific with his quotes. That certainly helped. He was very cognizant of his own image."

One such interview, with Ada Patterson of the St. Louis Republic, helped frame "Indians, Outlaws, Marshals and the Hangin' Judge." At the time she talked with Parker, he had lost his jurisdiction over the region. A few weeks later, he died of Bright's disease. For the re-enactment, Bill Rogers plays the Judge, and Jennica Schwartzman plays the reporter.

"I consider myself a reporter of history," says Foley, who has a long career in documentary filmmaking and in broadcast journalism. He's co-founder of campus TV station UATV. "We can't go back in a time machine and interview Judge Parker. What we have of Judge Parker are a few still photos of a young-ish (early 40s) Judge Parker and that one sort of fuzzy court shot. The question was how are we going to tell it ... . I found the full article on the Ada Patterson story that was published Sept. 6, 1896. The part that I had known about was just a little bitty excerpt of the story."

Reading the story was another challenge. The Republic had been archived on microfilm in the Gateway City. "They shipped the microfilm to the UA library. Sometimes you think, 'What am I seeing here?' You just can't see much in that little box. One of my fellow research colleagues told me a little trick. I could take screenshots of that thing and then blow it up on my computer and read it at my own leisure and see it a lot better," Foley says.

Interestingly, Parker's marshals may have helped develop the medium that makes Foley's new effort possible. Fellow UA professor Frank Scheide appears in the documentary and shows turn-of-the-20th-century film clips that show the lawmen on film re-enacting their duties. One marshal even directed one of the early movies.

COURT OF ONLY APPEAL

While feared outlaws such as the Daltons or James Gang used Oklahoma to hide from authorities, much of the reason Parker's harsh sentences stood is because, until his final years on the bench, it was just about impossible to get an appeal to them.

"For the first 15 of his 21 years on the bench, the only appeal process was back to him. He was his own appellate judge," Foley says.

If 79 executions sounds like a lot, it could have been more. As Mahar points out in the documentary, the United States Supreme Court overturned nearly 70% of his later rulings. Foley adds, "We quoted somewhat liberally from The New York Times, which means that this was a national story.

Foley also devotes much of the film to how Parker's reign was viewed on the other side of the state line. The tribes in living in Oklahoma didn't want outlaws running loose on their land but resented the heavy hand of Parker and his marshals. For five years, Parker's men pursued and eventually killed Cherokee Senator Ned Christie for the murder of a federal marshal. There's no evidence he had anything to do with the marshal's death.

"It's one of the other complications to the story," Foley says. "I wanted to make sure that an American Indian perspective was told. To be able to do that, you have to give them the backdrop of what all happened. With the whole thing of Arkansas and Oklahoma being part of Arkansas territory, the Feds and the state needed a place to dump the Indians. One of our historians calls it 'the dumping ground.' Each tribe was supposed to have its own jurisdiction, but they kept dumping tribe after tribe in there. They had jurisdiction over their own people, but they didn't have jurisdiction over the bad guys who would go in and hide out."

Some criminals preferred Parker's noose to his jail. The documentary provides vivid recollections of why this was the case. It was squalid and had offenders of all types crowded together.

"They called it 'Hell on the Border,'" Foley says.

No matter how well Foley does at bringing the real Isaac Parker to life, he'll always be at the mercy of the legend and seems fine with it.

"Shortly after his death, the city was so sick of this 'Hangin' Judge' reputation," Foley says."Somehow the land around the Fort fell back into the hands of the city. By order of the mayor, they burned down the gallows. This was 1897-ish. One of the things at the end of the film is that Parker comes riding back in the form of a statue where he is saluted."