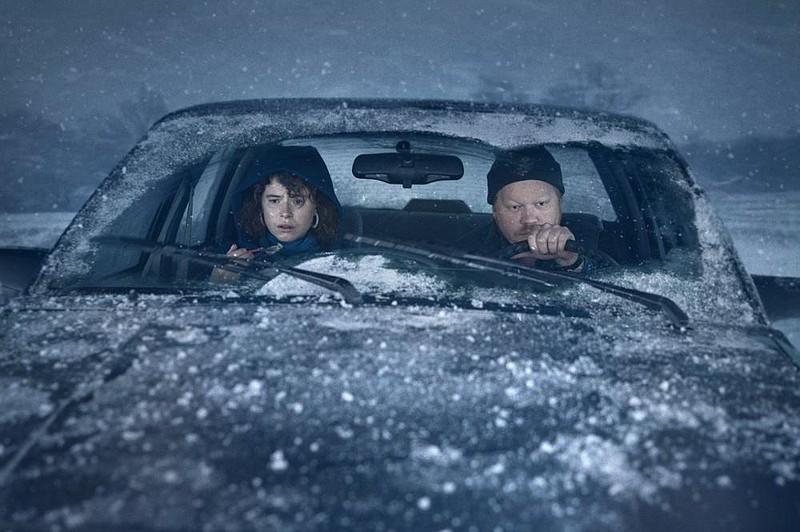 In Charlie Kaufman's "I'm Thinking of Ending Things," the protagonist appears to be a young woman (Jessie Buckley) who may be named Lucy or Amy or Louisa or something else entirely who is having second thoughts about her relatively new relationship with Jake (Jesse Plemons) -- though she hasn't summoned the will to call things off just yet.

That's a mistake because they are about to enter a new phase of making a road trip together, driving from the city to the remote countryside of Oklahoma to visit his parents. This is a little alarming, seeing how she hasn't even told her parents about stolid, thoughtful Jake, a good enough guy with a mind that can command both Wordsworth and a nutshell brief of quantum theory.

Jake is smart but somehow out of time. We notice, though the woman doesn't seem to, that his car is about 40 years old. There's something antique about his placidness.

This romance is going nowhere; maybe it shouldn't have gone anywhere. Maybe that trivia night in the pub was all a mistake, maybe they should have left it to shy smiles and long glances. But they didn't, and now they are driving through the snow, past abandoned farmhouses with brand-new swing sets assembled in the yard, for her to be presented to these people -- strange people, by Jake's own admission. Maybe they should stop to eat, his mother isn't well, there might not be much of a spread when they arrive.

Meanwhile, we occasionally cut to an aging high school janitor as he goes about his work, as he watches the kids rehearsing the Rodgers and Hammerstein musical "Oklahoma!" as he mops the floors in the cafeteria after dark. Is this Jake's father, a devastated farmer forced to take on work for wages? Don't try to guess. Later, it will mean something.

You thought "Tenet" was a tough movie to synopsize.

Movies are supposed to be about visceral experiences, not essays to be considered, right? Or maybe they can be both. I love a lot of movies Kaufman has been involved in, from Spike Jonze's "Being John Malkovich" (1999) and "Adaptation" (2002) to Michel Gondry's "Eternal Sunshine of the Spotless Mind" (2004) to Kaufman's own "Synecdoche, New York" (2008) and "Anomalisa" (2015). All these films look to subvert the conventions of popular entertainment and explore -- to use a key word from the current film -- the "interiority" of our condition. They are filled with dream logic and exist in impossible worlds just a touch out of sync with what we call reality.

Depending upon how much color and candy is introduced into the mix, people tend to find them wonderful or deeply disturbing; sometimes both. That's how I feel about "I'm Thinking of Ending Things," which Netflix rightfully categorizes as a psychological horror film. It's about the foreclosing of possibilities, about how our agency destroys much more than it realizes, about how the person you become murders all the people you could have been.

As in "Tenet," the movie plays with the idea of time as an imagined thing, something we've invented to allow us the illusion of an ordered universe.

There should be more concrete things to say about a movie. OK then, it's based on the acclaimed 2016 novel of the same name, which was Canadian writer Ian Reid's first work of fiction. (For what it's worth, Reid is the brother of the first lady of Iceland.)

The performances are sharp and precisely calibrated, the dialogue scenes between Buckley and Plemons will likely be replayed in actors' workshops for years to come. Toni Collette and David Thewlis, who play Jake's parents, are keyed to a slightly more comic pitch, which introduces an eerie dissonance into their scenes.

The film is divided into roughly three acts, the drive up, the visit, and the drive home. Both drives consist largely of a free-flowing conversation between Jake and the woman. The visit is a bizarre, nightmarish encounter with Jake's parents, changelings who appear in various versions, sometimes older, sometimes younger, sometimes enfeebled.

They are excited about Jake's new girlfriend and eager to put forward a good face, though they are obliviously mad and unable to take care of themselves and the farm -- what about the lambs that have frozen to death in their barn? Why is the border collie Jimmy always soaking wet and shaking off the rain?

Jake understands the woman cannot stay long, she has work in the morning -- she's a poet/gerontologist who paints expressionistic landscapes and studies physics. (Jake is a physicist.) She's worried about the blizzard outside, even though Jake's father allows that the single bed in Jake's old room could accommodate both of them, so long as, well, things don't get out of hand.

So, eventually, they leave. Jake puts the chains on the Oldsmobile.

It's a 1989 Ciera, and I think -- I flatter myself -- I have figured something out. When the girl starts reciting Pauline Kael's scathing review of John Cassavetes' 1974 film "A Woman Under the Influence," I recognize it. I recognize the Wordsworth too, and David Foster Wallace's critique of television. I didn't recognize the poem the woman recited (and claimed as her own) as the work of a Toronto poet named Eva H.D (who doesn't have her own Wikipedia page) but I knew it was a real poem, whoever wrote it.

Some people will be bored by these discursions, but they're the best part of the movie. No doubt someone will write an exhaustive article about all the references and allusions embedded in this dense text, and when they do I'll nerd out on it, the way any Christopher Nolan fanboy would on "Inception." But those who don't enjoy this sort of nitpicking might find the movie not so much impenetrable as annoying.

In a way this makes "I'm Thinking of Ending Things" a better watch on Netflix or on DVD, where it might be paused, rewound, replayed and archived for future viewing than it would be in a theater where someone else controls the remote.

You can't actually own a movie like this one, though if you are susceptible, it might wind up owning you.

Rating: R, for language including some sexual references