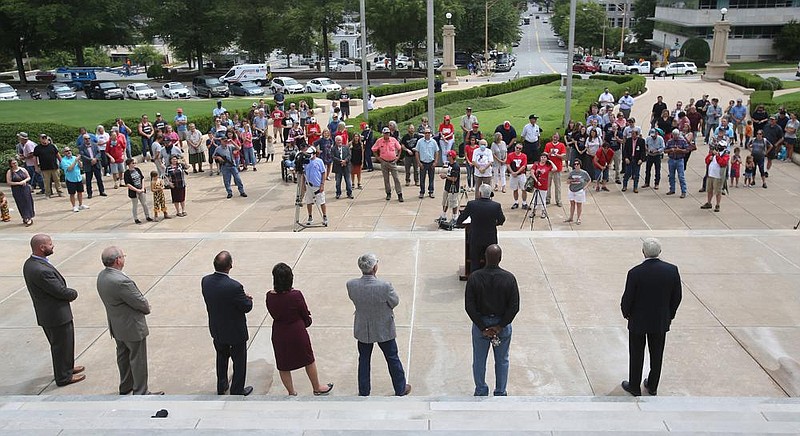 Supporters listen as state Rep. Brandt Smith, R-Jonesboro, speaks Thursday from the steps of the state Capitol during the announcement of a lawsuit aimed at overturning Gov. Asa Hutchinson’s months-long state of emergency and his administration’s public health directives. (Arkansas Democrat-Gazette/Thomas Metthe)

More than a dozen conservative state lawmakers filed a lawsuit Thursday seeking to end the public-health emergency declared by Republican Gov. Asa Hutchinson in March and overturn many of the actions that his administration has taken to curb the spread of the coronavirus.

After filing their lawsuit in the Pulaski County Circuit Court, several of the lawmakers led a rally on the steps of the Capitol, where they took aim at the "unelected bureaucrats" at the state Department of Health, including the governor's secretary of health, Dr. Jose Romero, who was named as the sole defendant in the lawsuit.

"He trusts his advisers more than the Legislature and the democratic process," said Rep. Dan Sullivan, R-Jonesboro, the first lawmaker to announce the plan to sue Romero.

The lawsuit comes after months of public discontent from the right wing of the GOP-controlled Legislature over Hutchinson's public-health directives. Those directives ordered many businesses to temporarily close at the start of the pandemic and later mandated that masks be worn in most public places. A few of the lawmakers who joined the lawsuit also had led a small protest against the mask mandate at the Capitol in July.

Sullivan, who led the lawsuit effort, defeated Sen. John Cooper, R-Jonesboro, in a GOP primary in March after the governor threw his support behind Cooper.

Responding to the filing of the lawsuit during his near-daily covid-19 news conference on Thursday, Hutchinson warned that undoing his emergency declaration would have ramifications on telehealth, liability protections for businesses and virtual education, which all have been expanded under Hutchinson's executive actions.

The governor said that his ability to take such action had previously been granted by laws and rules passed by the Legislature.

"I don't know any of them who are as qualified in public-health matters as our epidemiologists and our public-health leaders at the Department of Health," Hutchinson said of the lawmakers named in the suit. "Regardless of that, that responsibility has been assigned to [the Health Department]."

The lawsuit filed by the lawmakers argues that the governor's decision to declare an emergency and delegate certain powers to the secretary of health undermines the separation of powers in the Arkansas Constitution and gives Romero "absolute, unregulated, and undefined authority."

A spokeswoman for the Health Department said that the agency does not comment on pending litigation.

Hutchinson also called on Sullivan and the other legislators involved in the lawsuit to release the list of donors who are footing their legal bills.

Sullivan said the money for the lawsuit was collected by two groups: the Northeast Arkansas Tea Party and Reopen Arkansas, as well as by the lawmakers themselves. The complaint filed Thursday was written by attorneys at the Story Law Firm in Fayetteville, which previously employed Sen. Bob Ballinger, R-Berryville, who also joined the suit.

"There are not legislators that had any contact or part in raising the money unless we contributed as individuals," Sullivan said.

Other Republicans, meanwhile, urged a more cautious approach toward the governor's actions, and legislative leaders said there was little appetite to overturn them during a pandemic.

Sen. Blake Johnson, R-Corning, released a statement Wednesday ahead of the lawsuit, saying that while he shared many of the concerns raised by the plaintiffs, he believed the appropriate action would be for both chambers of the Legislature to vote on a resolution to rescind the emergency declaration.

"For our legislative body to terminate the current state of emergency, it would require a majority of the members in both chambers to agree that we have no confidence in our Health Department, our Public Health Officials and our Governor," Corning wrote. "I do not believe that such an agreement would be possible without much more deliberation, based on data that has been tested and verified during legislative debate and committee hearings."

Whether the Legislature could meet outside of session to pass such a resolution is a matter of debate, according to House Speaker Matthew Shepherd, R-El Dorado.

Regardless, both Shepherd and the leader of the Senate, President Pro-Tempore Jim Hendren, R-Sulphur Springs, said Thursday that they did not believe a majority of lawmakers would vote to overturn the governor's emergency declaration.

"I think most people understand that doing that would have some pretty catastrophic consequences," Hendren said. Hendren is the governor's nephew.

Sullivan said Thursday that he did not know whether a majority of lawmakers would support an effort to end the emergency declaration. He told the crowd at the rally that he did not want to wait another five months until January -- when the next general session begins -- to find out.

The lawsuit was assigned to Pulaski County Circuit Judge Wendell Griffen on Thursday. 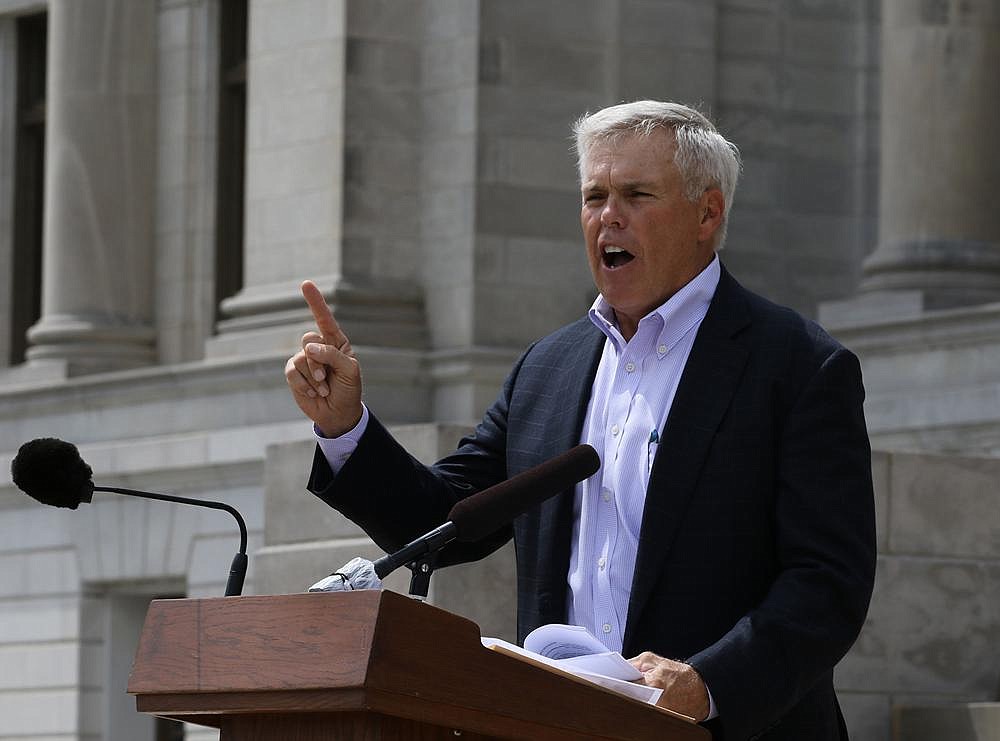