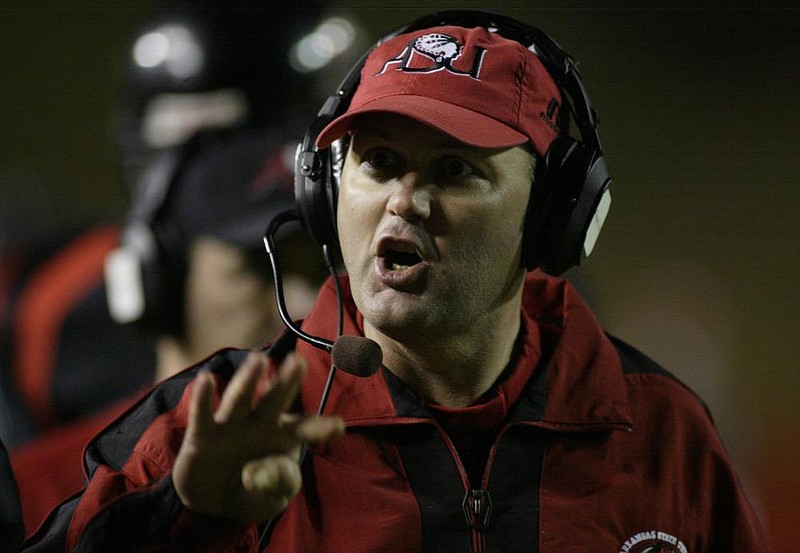 Steve Roberts coached Arkansas State to its last-second victory over Memphis in 2006. “From devastation to exhilaration,” he said. (Democrat-Gazette file photo)

Hanging on the walls of a fair share of restaurants and bars in Jonesboro is the same image.

Arkansas State University's Patrick Higgins leaping over a host of Memphis defenders catching a Hail Mary pass from Corey Leonard to beat the Tigers 26-23 in 2006.

The play, known as the "Bluff City Miracle," is one of the most memorable plays in school history. And as Arkansas State and Memphis prepare to renew the 59th game of the series -- the most-played opponent in school history -- on Saturday, 12 former ASU players, coaches and media members who were at the Liberty Bowl on Oct. 14, 2006, reflected on the miraculous play.

"It's one of the plays you never forget," Leonard. "It reignited that rivalry in some ways."

The following is an oral history of the Bluff City Miracle as told by those who lived it. Some quotes have been abridged for length purposes.

ASU came into the game with a 3-2 record, while Memphis was 1-4, having lost the three in a row. ASU hadn't beaten Memphis since 1991, losing 11 consecutive to the Tigers. But for the first time in over a decade, it felt as though ASU had a chance to beat the Tigers.

Mike McCarty, receivers coach 2004-07: It might have been a one-sided rivalry in their mind, but we wanted it to be a big deal.

Darren Hiller, offensive line coach 2002-11: When I was at Arkansas State, the Memphis game was the game.

Matt Mandich, left tackle 2004-08: An opportunity to go play Memphis was about as big of a game as it got for us. That was somebody we believed there was parity between us and we tried to prove that to everybody else.

Leonard: A lot of our players that were on our team were from the Memphis area. And a lot of the kids on the Memphis team were either from the same area in Tennessee or Arkansas. So you had kids who were highly competitive against each other in high school.

Todd Traub, former Arkansas State beat writer for the Arkansas Democrat-Gazette: There was an expectation that they could compete. And Memphis hadn't necessarily been gangbusters back then. But it would have marked a real big win for A-State if they pulled it off.

Bryan Hall, defensive line 2006-10: A lot of banter going back and forth with the teams. We almost got in a big fight in pregame.

Levi Dejohnette, wide receiver 2004-07: I remember in the first half, I had gotten so riled up that I was exhausted. I had tired myself out from all the enthusiasm going into it.

Arkansas State found itself up 17-6 at halftime, but after a couple of big Memphis plays, including a trick play in the fourth quarter, the Red Wolves fell behind 23-20 with 6:40 remaining. A couple of drives later, Leonard and the offense had one last shot with 1:32 to go at their own 27-yard line.

Steve Roberts, head coach 2002-10: We came to the last minute of the game, and we had to put ourselves in position to try and win the game.

Higgins: I thought we had it under control and were going to win by at least two scores, then all of the sudden we had to make a play to win.

Leonard: We missed on a couple plays because I had lost my shoe and had to throw the ball away. Luckily, a penalty helped us out.

After a short run and a 15-yard face-mask penalty, ASU advanced the ball to its 47-yard line with 0:06 on the clock.

McCarty: I felt helpless at that point. Like, ah crap, we let this one slip.

Ben Owens, linebacker 2005-08: I'm actually one of those guys that if there's still time on the clock, I feel like we can win.

Tanner Jenkins, center 2002-06: It felt like we were just trying to make enough plays where we were praying we could have a proverbial miracle in Memphis.

Dejohnette: I didn't really think we had a chance. But oh well, we'll see.

Matt Stolz, voice of the Red Wolves 2005-present: Man, I remember that last play so vividly.

Memphis called a timeout to converse about how it wanted to defend, while ASU decided what play to run.

Leonard: We had two plays. We had the Hail Mary and then if we had a deep dig where I threw the ball about 20 yards and then there was a lateral, kind of like Boise State did to Oklahoma.

Roberts: So I asked Corey if he could get it there.

Leonard: And I said yes.

Roberts: We were on the right hash so we called Hail Mary left.

Hiller: We actually worked the Hail Mary more from the left hash because we had a right-handed quarterback. We were on the right hash, which made it more difficult.

Leonard: I was in the huddle kind of disappointed but tried to be confident.

Jenkins: When Corey was giving us the play, I remember thinking to myself, "Just call the play and let's get this over."

Mandich: We knew we needed a lot of luck.

Leonard and ASU lined up on its 47-yard-line at the right hash, three receivers to his left and one to his right.

McCarty: Corey spun out of the pocket.

Hiller: He flipped his hips, set his feet and launched it.

Leonard: I let it fly.

Dejohnette: I was the first receiver down there so I had time to set up and see the ball coming in.

Higgins: When I turned around and looked up, my eyes were on the ball the whole time. It was coming straight to me.

Leonard: The idea was not for Patrick to necessarily catch it, but to tip it either forward or back. But nobody remembers that. They just try to catch the damn thing.

Dejohnette: I actually caught the ball. Patrick was underneath me and had his hand on the ball also. He had more momentum so he actually took the ball from me.

Higgins: It fell right into my chest. I just wrapped it up tight like a baby.

McCarty: No one on the sideline, no matter what they tell you, could see Patrick catch that football.

Roberts: Just a wad of bodies from our perspective.

Dejohnette: I started signaling with my hands that he caught it.

Leonard: I couldn't see anything because I was sweating so bad, all I saw was Levi signaling Patrick had caught it.

McCarty: Holy crap, did he catch the football? Are you kidding me? Are you bleeping me?

Mandich: It was mass hysteria. Once in a blue moon type stuff.

Roberts: From devastation to exhilaration.

Shortly after ruling a catch on the field, the officials decided to review the play to see if Higgins actually came down with it.

Traub: The thing I take away from all of it, is that Steve Roberts was not a big fan of replay.

Roberts: I wanted to pull the wires to the replay booth.

McCarty: If we could ever talk to the review people, I bet they'd say they could never prove he didn't catch it.

Leonard: I can remember Levi coming up to me during the review and saying, "I saw him catch it. I saw him land on it." As a freshman, you believe anything he says.

Stolz: It was probably around four or five minutes that they replayed it. It seemed like a whole lot longer than that.

Roberts: Finally, they said it was a catch and the celebration was bigger.

Stolz: How many times do you get to see a Hail Mary win a football game?

In the years since that game, Arkansas State has won four out of the last six meetings. Memphis leads the all- time series 30-23-5. And Saturday, the series will be renewed for the first time in seven years, leaving some wondering: Is Arkansas State-Memphis a rivalry?

Hiller: I don't know how they viewed it at Memphis, but we definitely felt that it was a rivalry game.

Roberts: We always competed on the recruiting trail, obviously the proximity of the two institutions, we had great crowds when we played each other. So it had the makings of a rivalry. But not being able to play each other every year, kind of made it disjointed.

McCarty: The University of Arkansas won't play Arkansas State. They won't give us any legitimacy. But Memphis was a good program and allowed us to legitimize it.

Mandich: It's kind of like the Razorbacks never scheduling Arkansas State, but they played three or four Sun Belt teams every year that I was there. Things that don't really make sense.

Owens: Arkansas is dodging us. So the next closest school besides UCA is Memphis. I'd like to see it evolve more into a rivalry. I felt like it was whenever we played them.

Dejohnette: I don't know if it's much of a rivalry now as it was back then. People had a lot of emotions in it. It was more personal then.

Higgins: It's a rivalry. We wanted to beat them down every year.

While some may not consider it a "rivalry," the Bluff City Miracle will live in Arkansas State lore for years to come.

Traub: I think you could say that that game made it a rivalry. That's the game where you say, "And now it's a rivalry."

McCarty: I think after the Hail Mary, their fan base said "We need to win that game every year."

Leonard: I'll be thinking back to that play this weekend.

Dejohnette: That was a spark in the program. I think they called the miracle in Memphis or something.