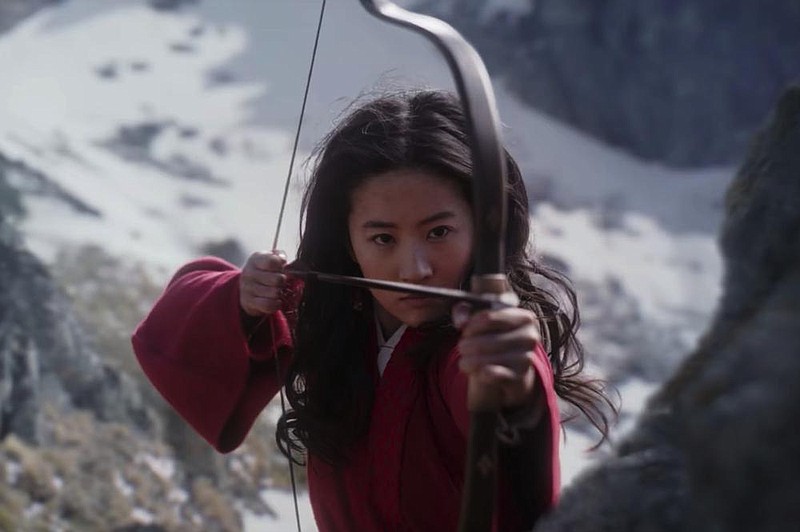 Mulan (Yifei Liu) is a different kind of Disney princess in Niki Caro’s live-action version of the ancient Chinese legend, which isn’t quite a remake of the 1998 animated film.

While many have expressed disgust at Disney Plus charging subscribers an additional $29.99 to watch "Mulan," the film itself is worthy of its heroic protagonist. New Zealand-based director Niki Caro ("Whale Rider," "McFarland, USA") has thankfully decided to ignore an irritating trend in recent Mouse House releases and has decided to only loosely follow the 1998 animated hit.

After seeing "Aladdin," "Beauty and the Beast" and "The Lion King" desecrated by technically impressive but uninvolving rehashes of more entertaining cartoons, it's refreshing to see Caro and a team of four screenwriters (Rick Jaffa, Amanda Silver, Elizabeth Martin, Lauren Hynek) make the Chinese legend their own. It would have been hard to make Eddie Murphy's turn as a bumbling dragon work on a second outing, so I'm happy Caro and her collaborators didn't try.

Instead, she has staged some impressive, if largely bloodless battle sequences, and demonstrated that watching leading lady Yifei Liu wielding a sword and riding a horse can be just as engaging as watching a cartoon dragon.

In this version, Mulan (played as a grown-up by Liu) demonstrated some physical prowess, but few skills at landing a husband. While her father (Tzi Ma) can tell she's special, her chances of landing a husband are thin, unless the groom is impressed with swordplay, courage and an instinct for spontaneous tactics that would make Sun Tsu proud. Pouring tea and wearing face paint may be what the Matchmaker (Pei-Pei Cheng) expects, but it's not what Mulan was born to do.

Fortunately for the Chinese empire, Mulan's real skills could come in handy because a northern warlord named Böri Khan (Jason Scott Lee) is conquering large chunks of territory. His formidable army is making short work of the emperor's troops, and he's eager to kill the Emperor (Jet Li) himself to avenge his father.

In addition to making the battle personal, Böri Khan has an additional weapon. Xianniang (Li Gong) is a powerful sorceress (don't call her a witch!) who can neutralize hundreds of Chinese troops by changing herself into flocks of birds. Because she's an outcast like Mulan, she follows the ruthless Böri Khan even though she thinks little of him.

To stop the invaders in their tracks, the Emperor conscripts battle-ready men from every family in the kingdom, but Mulan and her sister are all her father has to offer. Even though he has served the Emperor heroically in past battles, he now walks with a leg brace and has no business returning to combat.

To save her father from certain death, Mulan steals her father's weapons and armor and reports for duty as a man. She may not be able to take showers with her peers (who understandably find her body odor rank), but she can handle PT as well as they can. The catch is that girls aren't allowed to serve even though she gradually proves to be the one person who can prevent Böri Khan from overrunning the country.

Caro and Liu adjust the storyline of the animated film by having Mulan's triumph not be imitating men but by embracing her femininity. Mulan's agility and quick thinking easily trump brute force. She uses physics to counteract her opponents.

There's also an intriguing interplay between Mulan and Xianniang. The older woman can be intimidating and somewhat tragic. It seems sad that more armies could benefit from having someone who can subdue divisions without raising a sword or firing an arrow. It doesn't hurt that Gong is one of the best actors on the planet and can easily carry the role even if the special effects weren't there.

Lee is suitably gruff and mean, and Donnie Yen manages to find some hidden depth as the commander of Mulan's division. It's always a treat to see Yen make a mockery of gravity, but Jet Li has too few scenes as the Emperor. While he projects the right sense of gravity for the role, it would have been more rewarding to see him take up more screen time.

Just as I could do without Disney's exorbitant fee, I would have been happier if the computer-generated phoenix had stayed on the drawing board. Yen and Liu can create enough magic with their physical prowess.

Rating: PG-13, for sequences of violence