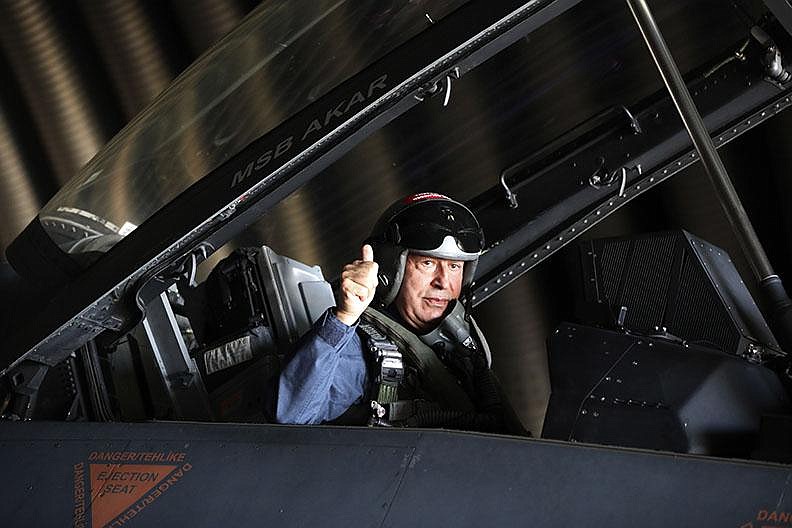 Turkish Defense Minister Hulusi Akar sits inside an F-16 jet fighter Wednesday at a military air base in the western city of Eskisehir before a training flight over the Turkish Monument in the Gallipoli peninsula. Akar said Thursday that Washington’s lifting of the arms embargo against Greek Cypriot-administered Cyprus will lead to a deadlock. “If you lift the embargo and try to disrupt the balance in this way, this will bring conflict, not peace,” he said. (AP/Turkish Defense Ministry)

ANKARA, Turkey -- Turkey has announced that Russia will hold live-fire naval exercises in the eastern Mediterranean, amid escalating tensions between Turkey and its coastal neighbors Greece and Cyprus over rights to search for energy resources in the region.

The navigational notice issued late Wednesday said the Russian exercises will take place Sept. 8-22 and Sept. 17-25 in areas of the Mediterranean where Turkish seismic research vessels are operating.

There was no immediate comment from Russia on the exercises, which Turkey announced after the United States said it was partially lifting a 33-year-old arms embargo against ethnically divided Cyprus.

It's unclear why NATO-member Turkey would announce such drills on Moscow's behalf, but the two countries have in recent years significantly strengthened their military, political and economic ties. They are coordinating on their military presence in Syria, while Turkey has purchased Russia's advanced S-400 missiles and has broken ground on a Russian-built nuclear power plant on its southern coast.

Turkey has said the U.S. move went against the "spirit of alliance" between Washington and Ankara. It also warned that it would harm efforts to reunify Cyprus, which is split between Turkish Cypriot and Greek Cypriot communities.

Turkey's announcement comes at a time of increased friction between Turkey on the one side and Greece and Cyprus on the other over offshore energy exploration rights. Warships from Greece and Turkey have been shadowing each other in recent weeks as Turkish survey vessels and drill ships continue to prospect for hydrocarbons in waters where Greece and Cyprus claim exclusive economic rights.

The U.S. embargo, imposed in 1987, was designed to prevent an arms race that would hinder U.N.-facilitated reunification efforts for Cyprus. It was directed against the southern, Greek Cypriot part of the island, where Cyprus' internationally recognized government is seated.

Cyprus split in 1974 when Turkey invaded after a coup by supporters of union with Greece. Turkey is the only nation to recognize a Turkish Cypriot declaration of independence and it maintains more than 35,000 troops in the north of Cyprus.

Washington said it was lifting the arms embargo against Cyprus for one year -- with the option of renewal -- to let it procure nonlethal equipment.

Turkish Defense Minister Hulusi Akar said Thursday that the lifting of the embargo will lead to a deadlock.

Akar also took aim at France, which joined Greece and Cyprus for military exercises in the region, accusing it of "bullying, making claims and playing the role of a guardian angel."

U.S. Ambassador to Cyprus Judith Garber said the embargo lifting had no connection to "valued partner and ally" Turkey, but aimed to strengthen regional security and to "counter malign actors in the region."

Garber said Washington waived a requirement that Cyprus cease to offer refueling and other port services to Russian warships, but that it would continue to "encourage" Cypriot government authorities to deny those services.

"We believe that Russia is playing a very destabilizing role in the region, especially in Syria," Garber said.

Information for this article was contributed by Menelaos Hadjicostis of The Associated Press.